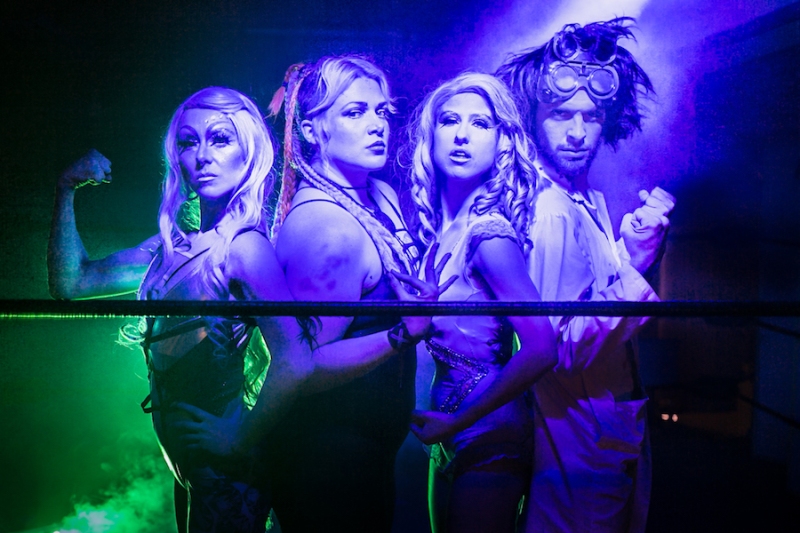 If you’re looking for an energetic and empowering night of completely original live entertainment, you’ll find it with Montreal’s feminist sci-fi wrestling collective EarthBound, inside their independently run wrestling venue the Sacred Square.

Ahead of this month’s fundraising show for the filming of a pilot for a new web series, we checked in with Morrow, Stasilowitch and filmmaker Marie-Michèle Cyr to learn more about the project.

Lisa Sproull: How did the EarthBound collective begin?

Tanya Stasilowitch: Marie-Michèle wanted to do a documentary on the [now defunct] League of Lady Wrestlers. That collective stopped, but we decided to create our own mythology for our characters. We did our first shows outdoors in the parking lot of my old place. When we found the Sacred Square last summer, it made it more concrete in everyone’s mind that the energy is really pulling towards the success of this project, so we went fully into it. Now there’s no turning back!

Hannah Morrow: There were three of us who were members of that collective [the League of Lady Wrestlers] who ended up continuing the stories of the characters that we were playing. We sort of shot off and created our own world, which is specifically science fiction stories with wrestling to work out a lot of the plot points.

Marie-Michèle Cyr: I was intrigued by the super progressive, queer and feminist politics behind the wrestling show — it’s something I’d never seen before! We started jamming ideas around the characters and there was a goldmine of potential for stories. Since then we’ve been writing shows and also the web series script.

Once in an interview, someone said that we were a wrestling space opera—that’s a good call! It’s really delving into the worlds of theatre, wrestling, science fiction and a bit of a rock show experience all at once.

LS: Are the stories mostly scripted, or improvised?

TS: The EarthBound shows are scripted heavily. An average live show will have an average of 20 page script with up to 60 music and light cues per show.

MMC: It’s pretty unusual for wrestling, but in terms of the theatre or the multi-media world, it’s closer to that in terms of production. We do it all independently, on our own, inside of our own venue, so it gives us a lot of freedom.

HM: The fun thing about the group is that for each of the elements that we’re employing, there are people in the group who come from that world. Tanya is more the top pro wrestler, and I have a more specific theatre background with writing scripts and directing live shows, and can help with acting exercises. Marie-Michèle comes from the film world, and she does these high quality live projections as well. The two other main characters have science degrees and really help to make it a true science fiction world.

LS: Can you tell me about the characters you portray? What are the kinds of things that these characters bring out of you as individuals and what are you able to give to them and take from them as you continue to work on this project?

HM: They’re very much our alter-egos, versions of us.You could say that they’re artistic imaginings of our higher selves—which isn’t to say that they aren’t flawed, but they are superheroes, so their flaws are different from our human flaws. Lilac is a supremely feminine, floral being and Ula is more of a natural warrior. When it comes to our Spirit Sister dynamic, there’s a lot of influence from the ’90s Sailor Moon/Girl Power wave.

Besides the two protagonists, there’s The Guardian [Sky Stryker], who’s the guardian of a diamond planet in a different galaxy. She’s got heightened powers that Lilac and Ula don’t even understand. Then there’s MadSi [Simon Maxwell-Stewart], who’s a human genius quantum physicist. He gives us a lot of trouble. Those are the four main characters, and for each show we’ve invited other wrestlers to play other characters as well. For instance, last show we travelled to Mercury and went up against the Mercury brothers Remedy and Mastermind. Then we went to Uranus and went up against Vanessa Craven. 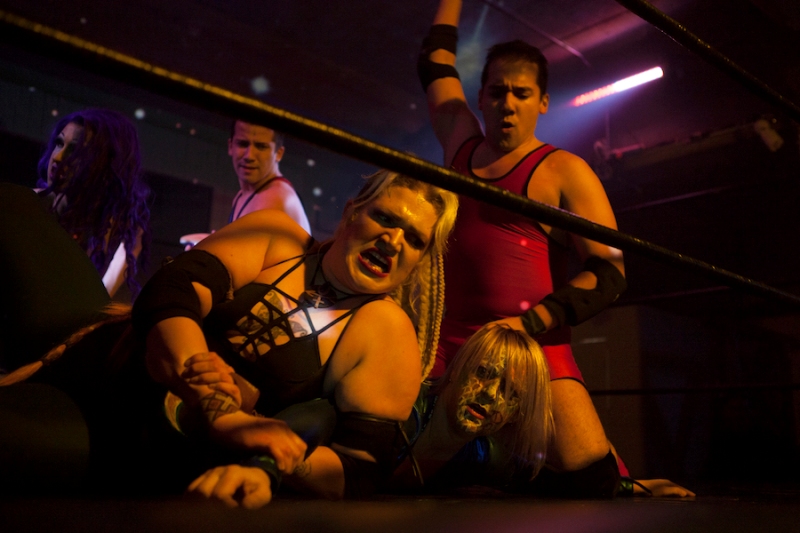 LS: When you’re developing the characters, do you try to make them a little bit ‘extra’ or keep them more grounded?

TS: [My character] Ula is so real. My personal process with this character has been really linked to my soul and my being. For me, the development of this character is such a really personal, spiritual process. Everything that happens in my life sort of puzzles into my character. Of course when it comes to live shows, Ula’s more animated and intense, because that’s what a live show entails, it’s live action! Ula is really animated, but depending on what situation she’s in—she’s more comfortable in her relationship with Lilac, so she’ll be more clownish with her, more friendly and loving. But against somebody who’s threatening her life or the life of Lilac, it’s all different. We try to develop the characters as realistically as we can for them to have a reason to fight.

LS: What were some influences that you’re pulling from and that you look to for inspiration, either past or present?

HM: For me, there’s no bigger artistic influence in my life than Buffy the Vampire Slayer. For real! I’ve been through more of the ‘fine art’ world and creating theatre where pop-culture references like that are looked down on as ‘not high art.’ As much as I’ve explored that, what I’m most excited about in this project is bringing about very complex questions in the audience’s mind in a really emotionally engaging way that’s also going to make us laugh and make us thrilled, and for me there’s no bigger influence than Buffy.

TS: In the wrestling world, who I looked up to was Chyna and Luna Vachon. That’s the only extent that I have in that world because I was never really into it, ironically enough. I would say my biggest inspiration as far as where my storytelling leads is Alejandro Jodorowsky. He’s really big in symbolism and the art of tarot, and the cinematography is really about the spiritual process. I kind of want to have that type of vision, but a feminist version. That’s my inspiration.

MMC: I’m a cinema geek to the core and I almost have a cult love for the likes of Blade Runner.  I’m really inspired by music in terms of storytelling and visuals, so one of my biggest inspirations (also going back to the 90’s) is Bjork—she’s always really close to my heart. I’ve also watched a lot of Baz Luhrmann films from childhood and there’s definitely something that stuck to me from that. The science fiction, the colourful characters just brings something so pop-ish, yet experimental in this project that I really like.

LS: What do you hope people will take away from the live show?

MMC: People get to be really close to the ring which is really fun. There are projections, there’s smoke, and the wrestlers are going through the crowds. What got me into it originally was the whole empowerment level. You see these amazingly powerful wrestlers who are women or gender non-conforming people who are being themselves and have all those people wanting to see them in action. It’s beautiful and so empowering.

HM: We’re calling it ‘Bonus Universe’ because stepping the characters out of the storyline that we’ve presented so far and we’re in an alternate universe for one night only. We’re inviting everyone to just be in our world with us with an exciting roster of local wrestlers.

With our live shows—and we hope to translate this to the web series too—we hope that it gets people energized to stand up and so-to-speak ‘fight the man’ in their own life and shine their light and go out into the world and kick ass!

TS: We make sure it’s a safe space for everybody. It’s an experience where we all feel comfortable together. What we’re trying to put out there is to inspire others to find the inner strength within and create their own self-hero, just like we did. It’s an age for others to build up their inner strength and battle it out. ■

EarthBound’s fundraising show Fight It Out: Bonus Universe, featuring a special auction round, live music by NOIA and special guest performances, is happening at the Sacred Square (2050 Joly) on June 16, 8 p.m., $10–$20 sliding scale. Check out the trailer here. If you can’t make the show but would like to make a donation to help fund the web series, you can get in touch with EarthBound by email at thescaredsquare@gmail.com or through their Facebook page.