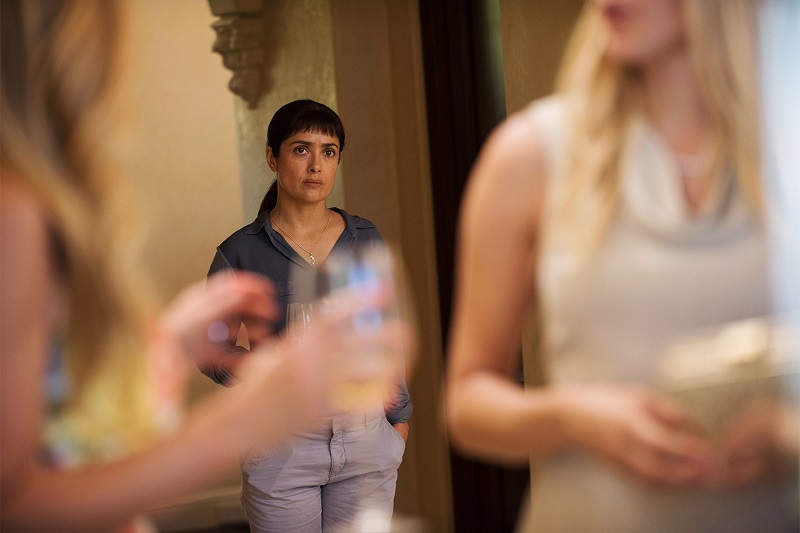 Salma Hayek in Beatriz at Dinner.

Movies can only be ripped-from-the-headlines within about the year. The average production schedule for any movie means that even if it directly comments on current events, those events aren’t likely to be current by the time the film goes through the lengthy post-production process. That having been said, there’s certainly been something in the air for the past couple of years if recent movies are any indication. Beatriz at Dinner is the most explicitly “Era-of-Trump” movie to have been released since the election.

“Mike White wrote the script in 2015,” says director Miguel Arteta. “It was, in some ways, inspired by what was happening in many areas. There was that dentist that killed that lion in Africa, and around that time Trump had already announced that he was going to run for president and had said such awful things about Mexicans. Mike started thinking, ‘What would it be like to be at a dinner party with someone who’s gone to Africa to kill a wild animal? What would I do?’ It was an amalgamation of all those things. It just feels like there is less and less room for compassion in this world.”

Beatriz (Salma Hayek) is a massage therapist and holistic healer living in California with her two dogs and pet goat. (She used to have two goats, but she suspects her neighbour killed the other one.) When treating a client (Connie Britton) in a faraway gated community, Beatriz’s car breaks down. Having grown close to the family when treating their college-aged daughter a few years before, Beatriz accepts her client’s invitation to stay for supper — not knowing that said dinner party is uniting an ethically dubious real estate magnate (John Lithgow), his significantly younger wife (Amy Landecker), the lawyer who helped him ink a big deal (Jay Duplass) and his wife (Chloe Sevigny), some sort of privileged mover-and-shaker in her own right. As the evening progresses, the socially awkward and almost supernaturally empathic Beatriz butts heads with the swinging dick of the one per cent, capitalists who will gleefully share everything that fucking over the little guy brings them.

Beatriz at Dinner marks the first big-screen collaboration between Arteta and screenwriter Mike White since The Good Girl in 2002; the two had first collaborated on what turned out to be a breakout for both of them, 2000’s seminal cringe comedy Chuck & Buck. Since then, both have lined up significantly lighter (or certain more hopeful) comedic projects: Arteta on films like Cedar Rapids or Alexander and the Terrible, Horrible, No Good, Very Bad Day and White on films like School of Rock and the television series Enlightened (which Arteta directed a few episodes of). Looking at the way their careers have gone when they didn’t collaborate, it may seem like White and Arteta bring out the darkness in each other.

“Mike has an, I think, pretty astute perception of humanity,” says Arteta, “and I think sometimes he likes me to do it because I come to it from a more compassionate kind of place. That’s the only reason that I can explain why the mix works really well, but we really do enjoy working with each other, and we share a lot of priorities in terms of things that we want to say about the world.”

It’s worth noting that, despite the fact that Arteta pretty clearly draws a line in the sand and picks a side, nothing is quite black and white in Beatriz at Dinner. For all her empathy, Beatriz is terrible at picking out social cues and seems to willingly and knowingly sink herself deeper and deeper into embarrassment, while Lithgow’s capitalist blowhard makes a pretty potent case for his nihilistic worldview at least once. Most viewers will find themselves standing somewhere between the two characters — an entirely deliberate choice on Arteta’s part.

“Mike very much wanted to tell the story from a balanced place,” says Arteta. “So Beatriz is not just a character who represents, you know, that liberal values are right and conservative values are wrong. He created a very interesting character of someone who’s a healer and totally concerned with compassion and helping each other, but she almost doesn’t have a sense of humour. There is a dark side, and an angry side, that’s lurking in there, but she doesn’t lead with that. She tries to understand other people first. And, I mean, my favourite thing about her is that she has no idea what chit-chat is. I find that really funny and, in some ways, really relatable because I feel that way: I’m not good at the art of banter.

“In contrast, the John Lithgow character really believes in what he’s doing, which is pretty rotten for the world. But he’s at peace with it and he has a good life and he’s… fun! He has a really compelling argument! (…) Me and my editor, we watched this 2,000 times… and he’s so good! I’m telling you, every time, I was thinking ‘What’s my problem?! He’s right!’ People are not just the way they are because they’re evil. The trial of being alive is that everybody has their good reasons. I think Mike did a really good job giving some smart and really compelling arguments to this character who’s self-entitled and willing to abuse others for his own benefit.”

It’s a very different role for Salma Hayek. For those of us used to seeing her as an Amazonian bombshell, Beatriz may cut a very different figure: she’s small and removed, often deliberately isolated in the frame. It’s less of an act of stunt casting than it may seem.

“Mike wrote it for her,” says Arteta. “There was a kind of selfish purpose in her being the most famous Mexican actress for the purposes of getting the word out. But we were huge fans of hers and when it came to Beatriz, we were portraying a female Mexican immigrant, so we wanted someone who could really portray some strength and some intelligence and some work ethic. Salma has enormous compassion. She’s so smart — I know she’s known for her beauty, but she’s so smart and so committed to her convictions. She had all the qualities we were looking for. We thought ‘Let’s give her some bad bangs, bad pants and I’m sure…’ (laughs) She had all of those qualities.” ■

Beatriz at Dinner opens in theatres on Friday, June 23. Watch the trailer here: