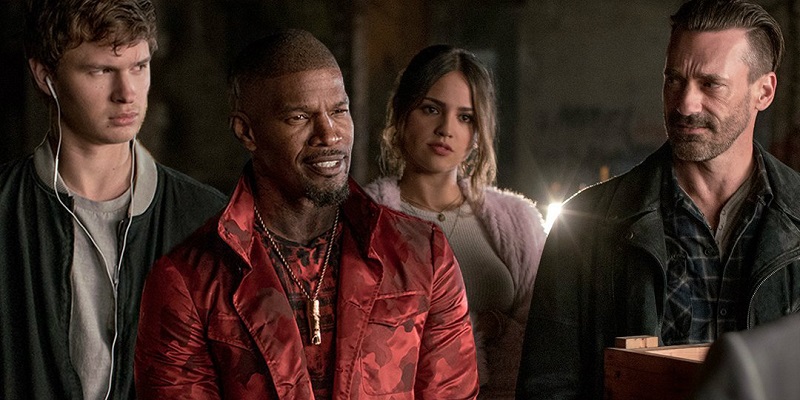 There’s a certain kind of cinema that appeals most to budding cinephiles. There are many ways it could be described (“dorm poster cinema” might be one uncharitable way), but generally speaking these films crackle with the joy – and the self-awareness – of the screen. They are movies that love being movies, that are very much brimming with the joy not only of their own action and characters, but with the very love of the medium itself. These are often, but not necessarily, violent films working within the genre idioms of action or horror.

Edgar Wright’s movies have always fallen into that category, to some extent; they’ve always been self-aware genre deconstructions even if they’re also comedies, and Wright’s latest is both his least outwardly comedic and his most obvious celebration of the joy of cinema yet.

It’s one thing to make a self-aware film that pokes fun at the trappings of its own genre, but what Wright is doing here is outright celebrating them. He’s making a movie that embraces tropes to a degree where parody and abuse become indistinguishable, a movie where the canned nature of a one-liner is also meant to be inherently badass. It’s certainly not a seamless experience, but it’s the rare kind of film that will appeal to people who love car movies and those who despise them – often for the exact same reason.

Baby (Ansel Elgort) works as a getaway driver for crime boss Doc (Kevin Spacey); Baby owes Doc for a teenage misdeed, and Doc has decided to parlay his superior driving skills into a form of payback. Plagued with tinnitus ever since the car accident that orphaned him, Baby is constantly plugged into his various iPods, using his careful curation of songs to score not only his daily life but also his criminal activities. Baby also begins a tentative relationship with diner waitress Debora (Lily James), just about the only person who finds his particular brand of innocent aloofness charming. With only one job remaining before his debt to Doc is ostensibly erased, Baby falls into the most difficult heist of his life: the theft of some money orders from a post office, a task rendered more difficult by the fact that Baby has been teamed up with trigger-happy couple Buddy and Darling (Jon Hamm and Elsa Gonzalez) and unstable psychopath Bats (Jamie Foxx).

Tonally, Baby Driver doesn’t quite resemble any of Wright’s other films. It has the sort of comedic innocence you’d find in Scott Pilgrim vs. the World paired with a much darker, violent aesthetic in line with crime films of the ’70s. There are jokes in Baby Driver, but when people die, they really do die. It’s not always a perfect balance – the innocence and po-faced romanticism of Baby and Debora’s relationship belongs in a different movie, the pure and crystalline ’50s-esque vision of love it presents being a little too out of line with the rest of the film. In truth, I find their doo-wop ice-cream-sundae relationship kind of dumb in a movie that also revels in reprehensible characters getting eviscerated. It’s obvious that Wright is making deliberate choices in order to create tonal whiplash, but the experiment doesn’t always work, peppering a muscular action film with knowingly doey-eyed moments that never quite gel.

What sets Baby Driver apart from the majority of car-centric movies is, of course, the soundtrack. Music is not only integral to Baby’s life, it’s a key part of his work and subsequently the film’s action. I can think of few movies (outside of straight-up jukebox musicals) that pay this much attention to the way pre-recorded music can affect a scene. Baby calibrates the soundtrack to his every experience, even going as far as to delay his getaway to restart a song if he couldn’t quite rev up in time with the beginning of the song. What initially struck me as little more than a cute gimmick soon worms its way into the very fabric of the scenes. Weaving together a collection of bangers from the fields of garage rock, soul, old-school hip hop and (inevitably) the Simon & Garfunkel cut that gives the film its title, Wright avoids dipping into the ever-expanding well of action-movie cliché jams. (And also Lionel Ritchie, the soundtrack’s one bum note of 2010s dollar-bin resurrection voodoo.) Wright cuts to music, sure, but he also cuts for music – it’s almost as if the film were constructed around an ancient mixtape, which bodes fairly poorly for the its emotional arc (the emotional arc of any mixtape is hardly its most subtle aspect) but pretty well for the action scenes that need some propelling.

Wright has cited the works of Walter Hill as an influence; it’s certainly felt in the muscular, no-nonsense construction of the action scenes. Fully embracing its status as a “car movie,” Baby Driver features at least half-a-dozen expertly constructed car chase sequences that fully exploit Wright’s knack for visual acrobatics. Even as early as Spaced, Wright had a tendency to weave kinetic action out of the silliest premises and most constricting resources; to see him finally working on a film this action-centric is to see him fully flex those muscles. When Baby Driver is firing on all cylinders, there’s not much that can match it.

The line between “cheesy on purpose” and “cheesy due to epic miscalculation” is a really thin one. Wright walks it for the entirety of Baby Driver’s two-hour runtime, from the stock characterizations that take two acts to come into their own to the frankly disposable flashback sequences. The fact that he’s willing to toe that line is what makes Edgar Wright’s films such a joy to watch – and it’s also what pains me about the slight disappointment I felt watching Baby Driver. It’s a lot of fun, but it’s a film that plays so heavily on Wright’s boundless love for genre cinema that it sometimes becomes indistinguishable from the films it so lovingly cribs from. It’s great fun, with terrific performances and a soundtrack that avoids bathing in too many clichés, but it’s also a little disposable for me at this point in my life. Ten years ago, though, I would have had a Baby Driver poster up in my (non-existent) dorm – no question. ■