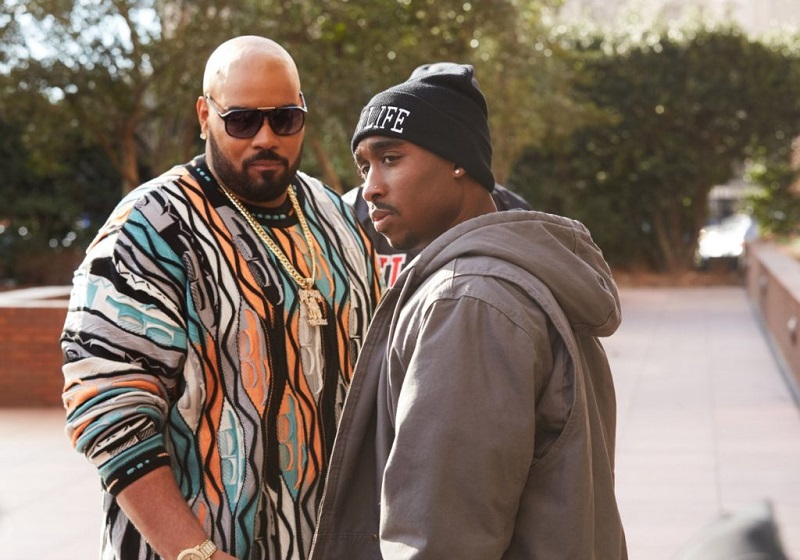 Dominic L. Santana and Demetrius Shipp Jr. in All Eyez On Me.

There’s no perfect way to make a music biopic, but there are lots of less-than-perfect ways. One of my least favourite framing devices is the interview, usually involving the subject sitting down for a career-spanning interview (late in their career, it goes without saying) with a journalist. The film then serves as the branches of a flashback tree, unfolding pretty much exactly as the protagonist is telling it.

It’s easy to see why filmmakers may be drawn to such a device. Often, it means they can work from the transcript of an existing interview for assured veracity, and it also means that they can use dialogue to straight-up explain the things we’re about to see. This last aspect is definitely negative. It generally results in filmmakers presenting material blandly while explicit narrative exposition does the dirty work. It brings me no joy to report that Benny Boom’s Tupac Shakur biopic, All Eyez on Me, uses that very device to get going – and it’s only one of the many biopic sins it commits.

Granted, anyone setting out to make a movie about the pioneering gangsta rapper has their work cut out for them. Famous for his entire adult life, Shakur was a man of contradictions – a gifted writer, dancer and actor who grew up in the hood but only really started living the life after he’d started rapping about it. Shakur also rapped about his life extensively while also making liberal use of poetic licence and overt narrative in his songs, making it difficult for audiences to pick out what was actually coming from Shakur’s life and what was heightened.

What makes Shakur so compelling as an artist is also what makes All Eyez on Me so complicated (and ultimately disappointing) as a straight-up biopic: he’s multi-faceted and often impenetrable, but he was also a real guy, which is sometimes at odds with the larger-than-life, messianic qualities he displayed at times.

The son of Black Panther and activist Afeni Shakur (Danai Gurira), Tupac Amaru Shakur (Demetrius Shipp Jr.) spent his childhood in motion, moving from NYC to Baltimore and finally to Oakland as his mother battled addiction issues. In Oakland, he falls into hip hop, eventually parlaying his talents into a spot in the party-rap ensemble Digital Underground. He uses the momentum from to release a first album, 2pacalypse Now, and an acting career that soon finds him gaining fame, fortune and legal troubles as one of the most famous rappers in the country. Shakur’s hardened image tends to attract attention from the wrong kind of people, and his success paired with the inflated sense of self that he develops soon sends him to the fearsome Suge Knight (Dominic L. Santana), a megalomaniacal record producer and tough-guy whose shady dealings only serve to complicate Shakur’s already complicated-enough life.

All Eyez on Me is 140 minutes long and only about 15 of them are devoted to Shakur’s childhood. We certainly can’t accuse the filmmakers of wanting to skim over anything or condense any events once Shakur becomes a rapper, but this attention to detail also comes with a certain lack of editing. Significant time is given to many of Shakur’s paramours (most prominently his childhood friend Jada Pinkett and Kidada Jones, who was with Shakur at the time of his death), his business partners, his musical collaborators (Snoop, Dr. Dre and Notorious B.I.G. all figure heavily) and the various less-than-savoury characters that come into his life over time – and yet, not many of his interactions with others do much to tell us about Tupac the person. We get to know a lot about Tupac the performer and Tupac the larger-than-life public figure, but the film often feels like it’s labouring to deliver every biographical point form required by die-hard Tupac fans rather than telling an actual story and creating actual characters.

I grew up hating Tupac Shakur. When I was about 12 or 13, a line was drawn in the sand amongst my friends: either you listened to Metallica or you listened to Tupac. Never mind that Metallica was currently in the midst of releasing its worst albums or that Shakur had been dead a few years already (the stream of posthumous albums was just starting to flow); this is what had happened and sides needed to be picked. I didn’t really care about either camp, but Metallica had guitars, which I liked, so I picked Metallica. That having been said, it’s not like we shunned our Tupac-loving friends, and I grew up with a fairly sizeable knowledge of the man’s life and work (as well as the various insane conspiracies surrounding his death).

All Eyez on Me does a great job of sketching out Tupac’s career, the arc of his music and the way his presence shaped the pop world around him, and for that it deserves kudos. It really did help me get a more concise picture on how all of the various anecdotes and urban legends tied to the man were weaved together, but the figure of Shakur himself gets lost below the sheen of the biopic structure.

The interview around which the film is built happened in 1995 as Shakur was serving a prison sentence for sexual assault (that the film pretty much exonerates him for outright). That means that the structure drops out before the end of the film, but it loses so much momentum in the early going that it hardly registers. Entire scenes are overlaid with voice-over narration from the interview, meaning that Shakur is giving us explicit explanations to something we’re already seeing unfold; bits of narration will explain the impetus behind a song only to have the actual film fade into a full performance of said song so we can better apply Shakur’s own interpretation of why he wrote it. (The most egregious example of this is following up a scene revolving around the sexual assault with a pretty-much straight-through performance of Shakur’s feminist anthem “Keep Ya Head Up.”)

It’s very hand-holdy and a little condescending. Part of the film’s thesis revolves around the fact that the majority of society had a real stick up their ass about Tupac and couldn’t ever look beyond his prior convictions and THUG LIFE tattoo to see the poet and social revolutionary inside. All Eyez on Me’s extremely by-the-book approach to the material suggests that every single member of that audience is still sitting on that stick and are going to need all the help they can muster to wiggle it out.

Shipp Jr. looks very, very similar to Shakur, and his charisma in the performance scenes make them easily the film’s best feature. His acting, on the other hand, is a little shakier. Shipp Jr. is making his big-screen debut here, and he feels a little green to be handling all of the ups and downs inherent with not only being a lead but also portraying a character as complex as Shakur.

A small clip of Shakur is played over the credits and, while it’s incredible how much Shipp Jr. actually looks like him, he’s only about half of the way to being as charismatic and likeable as the real deal. In general, Boom has peopled his film with fresh faces in a way that skirts around the particular cliché of familiar faces in lieu of other familiar faces (except – I guess – Jamal Woodard as Biggie Smalls, since Woodard also played him in the 2009 film Notorious, so he’s the very rare instance of a familiar face that’s familiar only because you saw it take the place of another familiar face) but not all of the actors are equally skilled at handling the film’s heavier material.

In a way, the inevitable ageing of the hip hop mythos is the best possible thing that can happen to the music biopic. Now that the birth of hip hop is far enough in the past that it automatically sparks nostalgia and legend-building, it might be possible to inject a little energy into this increasingly moribund film genre. Hip hop is particularly interesting because the subject matter of the music often blurs the lines between reality and heightened fabrication in a way that rock music often does not – not to mention that the trajectories and live-fast-die-young mentalities are a little different. (F. Gary Grey’s Straight Outta Compton handled that aspect beautifully; it remains the bar to clear in this universe, as far as I’m concerned.)

Unfortunately, that’s not really the case with Tupac Shakur. The broad strokes of his life fall in line with every cliché of the rock biopic, and the nuances aren’t really present in All Eyez on Me. I know it’s insane to posit this from a commercial level, but I would love to have seen a freewheeling, I’m Not There-style biopic instead of this serviceable, what-you-see-is-what-you-get effort. I mean, it’s all there: the various artistic incarnations, the aliases, the duelling factions torn between street cred and artistic intent. All Eyez on Me is only about a third of the way there, but that’s still a third of the way. There’s a great, great movie to be made from Shakur’s life story, but we’ll have to wait longer for that one. ■