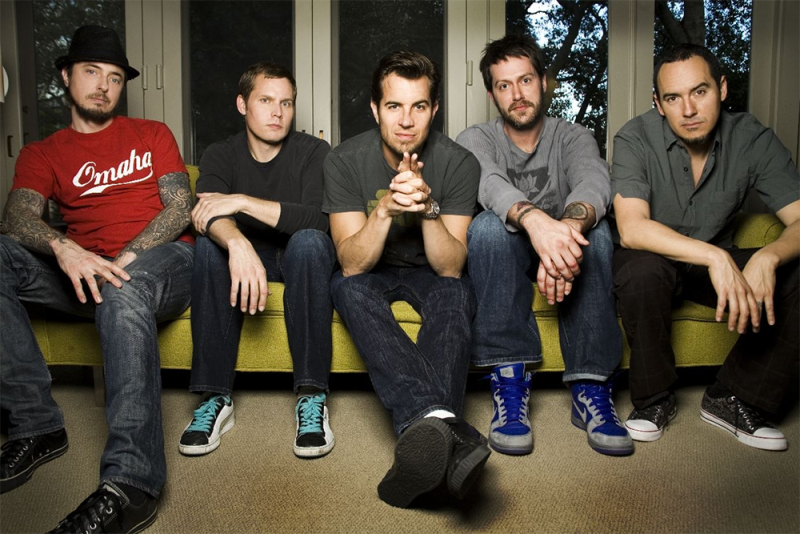 In any case, the band caught a new wave of fandom late last year when they performed their hit single “Down” on Adult Swim’s cult smash The Eric Andre Show — while being water-boarded (and joined by T-Pain). It was bizarre, it was hilarious and, most importantly, it utterly captivated Generations Y and Z.

Ahead of their upcoming album, Mosaic, and performance at Montebello Rockfest (June 23 and 24, respectively), I hopped on a call with lead vocalist Nick Hexum to discuss televised torture, philosophy, and plenty more:

Mr. Wavvy: If you had to describe 311’s upcoming album, Mosaic, using one word, what would it be?

MW: John Feldman, a musically controversial producer in some senses, contributed quite a lot to this record. What drove the band to work with him?

MW: Especially after his involvement on Blink-182’s last album, California, critics have said that he overproduces, doesn’t leave tracks a lot of breathing space.

NH: I understand. The single we did with him was fairly dense but honestly, that was me a lot because I got into playing a real Hammond organ and real clavinet, getting a real rootsy sound. But it is fairly dense and layered. Some other songs we did with him are actually very sparse. So I think he really puts the melody in the song first and he has a lot of tricks as far as the latest production styles. There are some of them that we rejected and said “No, let’s keep it simple there.” But that was interesting for you to say, I hadn’t actually heard that.

MW: I guess it also varies from band to band. 311 and Blink-182 are nowhere near each other, stylistically speaking.

NH: Yeah. And they’re a three-piece, we’ve always had more. Having five guys is immediately going to be a bit busier music. We’ve had percussions, keyboards and 808s from our very first album. We’re a rock band, but there are always loops and other kind of things that made it more hip hop. It’s kind of always been part of what we’re doing.

The most exciting is the groundbreaking styles we’ve gotten into. There are a good handful of songs that there’s no doubt that they’re just a brand new style. New to our band, and new to anyone. Pick a song like “Too Late” — that strikes me as very unique. We’re very excited for it.

MW: Can you expand more on what exactly will be groundbreaking?

NH: The groove, but also having builds and drops. Sometimes a piece of music is so great that you don’t want to muddle it up with vocals. You take that drop in “Too Late”, that’s a new style to us.

There are definitely drops in EDM, but doing it with a live band and having that kind of intensity just felt new to us. It’s very subjective. Someone else could be like, “That ain’t new.” To us, it feels new.

MW: I’m a weirdo, and I’m also a millennial. I feel like my generation’s way into 311 as of recently was seeing you guys tortured on The Eric Andre Show. Can you walk me through that experience?

NH: (Laughs) We were told, “He’s gonna mess with you.” He’s a huge 311 fan and had been dropping these hints throughout the show, throwing in references to us throughout the previous two seasons. We kept hearing about this dude, and we met him, and he was just, like, naming all these songs!

He said, “I wanna have you on the show.” They warned us he would be messing with us really hard. To me, Eric is on a family tree that starts with The Tom Green Show into Jackass, and other various types of reality/prank/wackiness, only he takes it to a whole new level.

We were like, “Alright, it might hurt, but that’s just little mental signals going into your brain. He’s not gonna actually do any damage!” Who can’t laugh at themselves and take a little embarrassment?

I will say that I wasn’t actually water-boarded, that was a stand-in. But he did poke me in the balls with a rubber baseball bat!

MW: It definitely seemed as if P-Nut and any member towards the back had less chaos to cope with.

NH: When we got done shooting, I was like, “You motherfucker!” He told me, “Okay look, I just had this wound on my finger sewn up and it’s kind of infected, flick it as hard as you want!” I flicked him on this puss-heavy, stitched up wound to get even, so we’re square.

NH: We only met him that one day. He was nice; he was kind of drunk, too. It was just a fun day. I don’t know if we’ll ever cross paths with him again, but I have been talking to Eric on Twitter, so that’s cool.

NH: We’re fighting the good fight to keep live instruments in popular music, that’s one thing people appreciate about us. I think we’ve made a soundtrack for certain people that relate with us; they like melody, they have a fairly positive attitude, enjoy brainy, nerdy, intellectual lyrics. It may not be a huge cross section of the world, but we have our niche. The people that are into us really get into parsing over the lyrics. It’s kind of an honor to be the ringleaders of something like that.

MW: Speaking of niches, I think 311 being featured on cult-followed comedies such as The Eric Andre Show and HBO’s Animals has resulted in the band gaining quite a bit of attention from my generation of 20-somethings. Do you think there are any particular aspects of the band’s sound that has sparked such a resurgence with millennials?

NH: I think having an edginess that relates to people’s wild side, whether younger or older, is something that we’ve always wanted to keep. We’ve just found a way to update our sound really organically.

I’d say our last album, STER3OL1TH1C, was a little more of a throwback, particularly with the riff-rock and rap that our core fans love. But we’ve done that a lot. We still have it on the new album, but there’s also a lot of new styles that don’t sound like anything we’ve ever done before. I think it clicks with the younger audience when you’re getting a little more into a current style, especially with the EDM and dancehall influence that are timeless, yet current.

MW: If you were given 24 hours left to live, how would you spend them?

NH: My two favourite things are my band and my family, so I’d have to divide those up. With the family, we love to travel and swim, do stuff like that. With the band, we love to record and play live. If you could divide that up in a 24 hour period, that’d be a perfect day.

MW: Last but not least, what is the meaning of life?

NH: To love and propagate. ■

311 perform at Montebello Rockfest on June 24