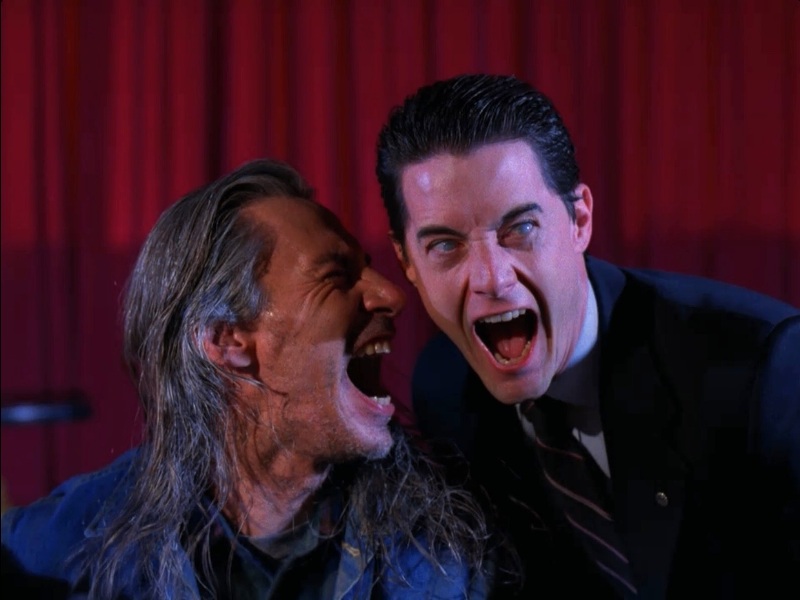 Bob and Cooper in the Black Lodge

Cult filmmaker David Lynch and pro TV writer Mark Frost were paired up by Warner to work on a Marilyn Monroe script that never materialized. Instead, they conceived a series inspired by the dark underbelly of small-town America depicted in Lynch’s 1986 film Blue Velvet, with a heavy dose of soap-opera satire. In 1988, a writers’ strike moved ABC execs to greenlight the project.

When it aired in 1990, Twin Peaks quickly became an international obsession, but mainstream success and network interference doomed the show to cancellation after only a season and a half. The creators were forced to resolve the mystery of who killed Laura Palmer, disturbing the show’s intended flow and resulting in plummeting ratings. But the deeper mysteries and mythology of Twin Peaks flourished in its last episodes, allowing Lynch and Frost to develop one of the most (excuse me) fucked up series finales ever.

Without spoiling it, let’s just say that the final hours of Twin Peaks saw a succession of worst-case scenarios for its characters. Lynch’s 1992 follow-up film Twin Peaks: Fire Walk With Me was a prequel rather than a sequel, one that expanded on the show’s backstory, particularly the machinations of its supernatural netherworld, the Black Lodge. Now that the series is returning to TV on May 21 with an 18-episode season, we’ll finally see the fallout from 1991’s narrative cluster bomb, and inevitably be led back to the evil in those woods.

The secrecy around Twin Peaks season three has been as tight as it was around Laura Palmer’s killer back in the day. A few clues to its content can be found in Frost’s book The Secret History of Twin Peaks, which traces the town’s paranormal roots all the way back to the era of the native American genocide, depicting strange encounters and government intervention up to (and including) the action of the original TV series.

“I’d always wanted to do a Twin Peaks book myself, so that was my first impulse once I knew we were gonna go ahead and do the (new) series,” says Frost, who penned the book after co-writing season three with Lynch, and suggests that some of The Secret History is more relevant to the next season than the previous ones. “Particularly at the mythological level, I was guided by some of the areas that we delve into in the new show. Without going into any detail, a rigorous examination of the book will not hurt your appreciation of what’s to come.”

Having published seven mystery and adventure novels and four non-fiction sports books since 1993, Frost was well-prepared to blend tales of the fictional town he co-conceived with actual American history. This task entailed substantial research into the Civil War and WWII eras, UFO sightings and alien abductions, black magick cults and federal covert ops and cover-ups.

“I’ve always been deeply interested in American history and American politics,” says Frost, who was “raised politically” — his great uncle served as secretary to U.S. presidents Franklin Delano Roosevelt and Harry Truman, and at age 20, he was glued to the Watergate hearings. Richard Nixon makes a surprise appearance in The Secret History of Twin Peaks, at one point wearing the cursed jade ring from Fire Walk With Me. This led me to ask Frost whether the current administration is akin to a “Black Lodge presidency.”

“Oh no question about it,” he says, referring to Nixon as “a dark prince that America had been waiting for, or dreading, for a long time,” and Trump as “a guy that makes Nixon look like a baptist preacher by comparison.”

“I don’t think we’ve ever experienced this level of internal threat to the fundamentals of what our country’s about, at least since the Civil War,” he says of Trump — take a look at Frost’s Twitter feed for commentary on the outrage of the day (interspersed with Twin Peaks tweets). “I wanted the book to be political at that level, (addressing) the notion that the best of America is an idea that, at various times, its people either live up to or let down.”

According to Frost, the state of the nation played a role in the direction of the book as well as the forthcoming Twin Peaks season. The Showtime network gave Lynch and Frost creative carte blanche (as well as, after some negotiation, their requested budget), and given the rampant anti-heroic, violent and sexual content of cable shows these days, I questioned whether the new Twin Peaks would retain the original series’ prime-time-friendly balance of levity and darkness, or (like Fire Walk With Me) focus on following its protagonist into the depths of depravity.

The Secret History of Twin Peaks is published by Flatiron Books. Twin Peaks begins on Showtime (the Movie Network in Canada) on May 21.