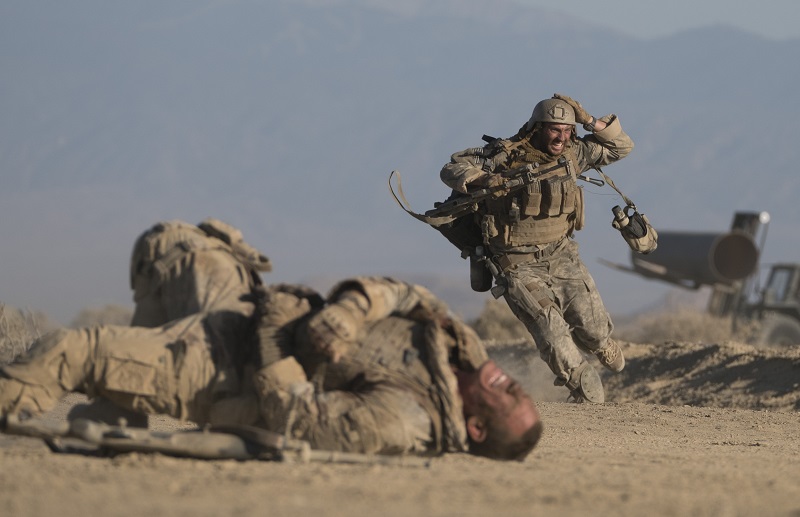 John Cena and Aaron Taylor-Johnston in The Wall

The current state of mainstream filmmaking doesn’t have too many upsides: less people are seeing movies, less people are paying to see challenging movies, all the money is being spent on a relatively small number of mega-blockbusters that all wind up feeling the same way, TV is supplanting cinema as a storytelling means now that binge-watching is made so easy by technology.

These are all bad… but these are all things that happened before, more or less, in the first Golden Age of Television. One of the few upsides to this seismic shift is that studios seem more likely to take chances if the costs are minimal. Doug Liman’s The Wall is no great shakes from a narrative point-of-view, but its minimalistic style recalls the kind of heightened genre cinema made by great directors in the early ’60s, when it seemed like TV was going to kill cinema while studios sank all of their money in expensive epics like Cleopatra.

American soldiers Isaac (Aaron Taylor-Johnston) and Matthews (John Cena) have been hiding in a pile of brush for almost an entire day, their scopes trained on the scene of a massacre around a pipeline in the Iraqi desert. They have reason to believe that the Iraqi sniper responsible for said massacre is still out there, waiting for them to uncover their positions. After a full day of waiting, however, the soldiers decide to climb down only to become trapped by Juba (Laith Nakli), a sniper who has also taken over their communications. Protected only by a crumbling brick wall, constantly taunted by an ace sniper and with Matthews severely injured several dozen feet away, Isaac finds himself engaged in a battle of wits with no real happy ending in sight.

You could almost do The Wall on a theatre stage. All you truly need is a couple of actors and the titular wall. On film, though, what it probably more closely resembles is a war-torn installment of the Saw series, a claustrophobic psychological thriller about an all-powerful puppermaster and the put-upon puppet who only has a limited environment and limited resources to try and cut the chains. The Wall’s limitations actually work in its favour: Dwain Worrell’s script is lean and no-nonsense, concentrating its entire 90-minute runtime to the events at hand. There are no flashbacks, no cutaways to some generals trying to get our boys back home, no fantasy sequences – when I say it’s a movie about two guys held up by a sniper, I mean it.

That said, the film does indulge in some backstory to fill out the tense cat-and-mouse game played between Juba and Isaac that essentially makes up the entire middle act. If the film has one defining flaw, it’s how thunderously banal and familiar that backstory turns out to be. If The Wall’s form proves to have the lean and muscular feel of a Robert Aldrich or John Frankenheimer film, its texture has the dull feel of a million war films before it, full of fallen comrades and residual guilt.

The Wall is an Iraq war film, of course, and like many of its brethren, it comes across as rather critical of the motivations behind the conflict. Juba, though an invisible and villainous figure, is nevertheless cast in as sympathetic an eye as the American soldiers and though it remains a tense genre film, it also flirts with the existential turmoil of armed conflict. Like the underrated (and similarly claustrophobic in many respects) British film Kilo Two Bravo from a few years ago, The Wall suggests that conflict becomes an almost total abstraction in the face of physical war – that sides are irrelevant and motivations petty once each side has a scope trained on the other.

It’s probably optimistic to think that The Wall represents any kind of change in the landscape. It plays like a throwback even though it isn’t, and it’s a little too familiar even though it feels like a breath of fresh air. It’s an interesting movie, though, and I’ll take those where I can get ’em. ■

The Wall opens in theatres on Friday, May 19. Watch the trailer here: