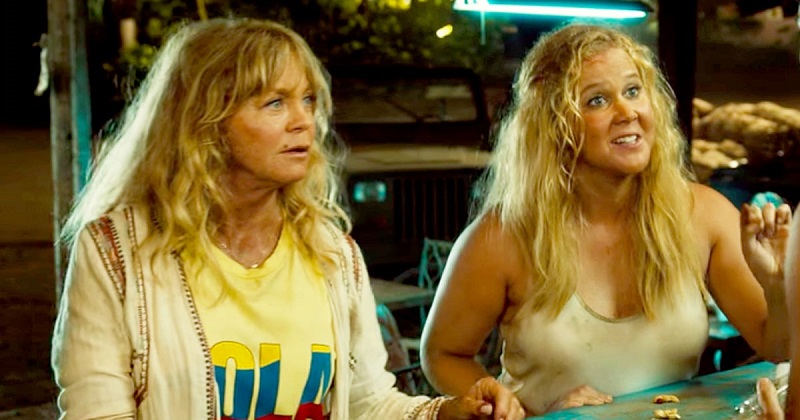 It’s been a couple of years since Amy Schumer was sanctified with the title of Next Big Thing. It’s certainly done well for her stand-up career, making her one of a handful of comics who consistently tours arenas in North America, but Schumer’s film career remains more or less centred around the extremely Schumeresque Trainwreck. Not so much an acting vehicle as it is the natural continuation of her stage act given an Apatowian three-act structure, Trainwreck was both the perfect vehicle for Schumer and sort of completely expected in every way.

Part of being the Next Big Thing comedy star, though, is being in low-stakes, high-concept comedy vehicles that trade on your name and your name only. Glory be, in that case: Snatched is Schumer’s very own Along Came Polly or Good Luck Chuck, a forgettable, by-design raunchy comedy meant to bridge the gaps on the way to Current Big Thing status.

Schumer plays Emily, an immature and barely employed New York party girl who’s dumped by her musician boyfriend (Randall Park) just days before their planned trip to Ecuador. Defeated, she returns home to Mommy (Goldie Hawn), a cat-obsessed retiree who almost never leaves the house and still coddles Emily’s agoraphobic older brother (Ike Barinholtz). Emily takes it upon herself to dig out the fun mom that lives buried somewhere deep inside her non-fun mom by convincing her to come with her to Ecuador.

The trip is less than a success: Emily cares mostly about getting smashed while her mother worries. She has reason to worry, of course. After Emily has a dream date with a hunky Brit (Tom Bateman), he takes both her and her mom to the beach. It’s a ploy, of course. His car is rammed by a creepy van and both Emily and her mother are abducted by some scary cartel gangsters.

If that sounds like an icky premise for a comedy, well, you’re not wrong. That having been said, the kidnapping is a minimal part of the film – they’re out almost immediately as soon as they’re in, and the film becomes a wild chase through the jungle as they try to avoid their captors. It’s the kind of comedy where the protagonists meet a kooky secondary character every 10 minutes, preventing them from having the big cathartic truth-telling moment that will defuse tension once and for all.

The script (by Katie Dippold, who also wrote The Heat and Ghostbusters) feels very minimally interested in exploring its characters and their relationship. This isn’t as fatal a flaw in a broad comedy like this one, but the emotional stuff is so perfunctory and tossed-off that the film grinds to a halt every time it decides to plunge back into that well.

Snatched does have some laughs, though they’re not exactly hard-earned. Schumer and Hawn have great chemistry (the latter having been off screens for a whopping 15 years) but they’re not given much to stretch their wings, and the film’s gross-out / panicky setpieces (such as one where a rural doctor played by Broad City’s Arturo Castro has to yank a tapeworm out of Schumer) become repetitive before long. It falls on the supporting cast to diversify the laughs, and the majority of the film’s best moments come either from Wanda Sykes and Joan Cusack as an overly cautious vacationeer and her mute, former Special Forces pal and Bashir Salahuddin as a world-weary government employee roped in by Barinholtz to help. Without their interactions, Snatched is a repetitive two-hander that fails to capitalize on its leads’ talents.

To their credit, the people behind Snatched seem to be well aware of what they’re doing. The big flaw in both of Dippold’s previous credits is that plot sometimes gets in the way of comedy, which is hardly a problem here. Director Jonathan Levine isn’t too concerned with sending tropes or reveling in them (not a single “this character accidentally got high and now here’s them dancing wildly while the camera work staggers between fast and slow motion to a Wu Tang song” scene to be found!), content to let the jokes speak for themselves. I laughed quite a bit during Snatched, but now it’s been two days and I can barely tell you why.

Inside Amy Schumer showcased Schumer’s comedic voice in a way that neither Snatched nor Trainwreck (which I liked quite a bit) has quite managed to. Snatched isn’t as daring as one would hope from Schumer – it’s a distillation of her comedic persona in the laziest way and, while it certainly won’t kill you on a hungover Sunday morning, you’d be hard-pressed to remember it a week later.

That’s how these kinds of comedic vehicles work, mind you. If nothing else, Snatched certainly fulfills the promise laid forth by its own lack of ambition. Schumer deserves better, but I’m almost certain that she’ll get it. ■

Snatched opens in theatres on Friday, May 12. Watch the trailer here: