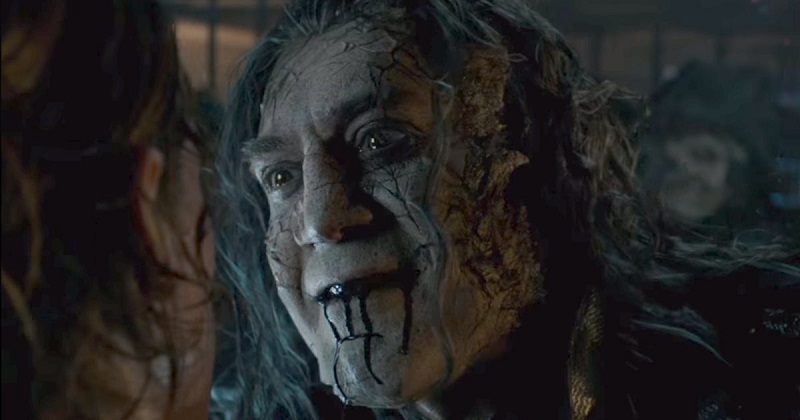 Javier Bardem in Pirates of the Caribbean: Dead Men Tell No Tales

A lot has changed since the first Pirates of the Caribbean movie came out in 2003. I remember how incredibly novel a pirate-based blockbuster felt then. I remember how fresh Johnny Depp’s extremely mannered Captain Jack Sparrow felt coming from an actor who hadn’t yet made it his default setting.

Now nearly every blockbuster follows Jerry Bruckheimer’s lead when it comes to expansive, forever-unspooling mythos and Depp has applied soused facial tick explosions to pretty much every role he takes on (including that of being alive). There’s barely any space for a fifth Pirates movie and yet here we are, faced with the very diminishing returns of a sluggish franchise with nothing left to say but a blank cheque with which to say it.

Henry (Brenton Thwaites) is the son of Will Turner (Orlando Bloom), the swashbuckling hero of the first four films who now lives cursed at the bottom of the sea with barnacles growing on his face. Henry is determined to break his father’s curse, but for that he must find the perpetually drunk rascal that is Jack Sparrow (Johnny Depp). Sparrow’s got other problems, of course: he’s being hunted down by Captain Salazar (Javier Bardem, trying his best), another buccaneer rapscallion who was ALSO cursed (but this time it’s Sparrow’s fault). Prisoner of a ghost ship with his zombified, ghostified crew, Salazar is stuck between life and death and seeking revenge against those who put them there.

Would-be astronomer Carina Smyth (Kaya Scodelario) gets somehow embroiled in the whole thing since she holds a coded map that will lead them all to the hiding place of Poseidon’s trident, a sacred artifact that will (somehow) stop all of the bad shit from happening. Barbossa (Geoffrey Rush) also gets involved somehow, though I wouldn’t be able to pinpoint why, exactly.

I guess now would be a good time to draw a line in the sand between complicated and complex: Dead Men Tell No Tales gets extremely fucking complicated very fast. Like the previous installments, it dwells on a full act of quasi-unrelated shenanigans before the actual story gets underway, yet the movie throws so much narrative chum in the water that it takes almost 90 minutes before anyone’s motivations are made clear.

I’m still waiting to understand exactly what Dead Men Tell No Tales is actually about except perhaps shifting the series away from its now-ancient leads (Keira Knightley is 32, simply unacceptable) into the hands of Thwaites and Scodelario. What it certainly isn’t is complex. The trident feels like a Macguffin until it ultimately proves not to be, but everyone’s motivations are so unclear and so completely shrouded in the cacophony of spectacle that the viewer’s confusion is not only automatic, it is completely unavoidable.

Dead Men Tell No Tales finds plenty of space for Depp’s slapstick shenanigans – they now exist almost completely apart from the main action, all three of the Stooges rolled into one eyeliner-dappled pile of scarves and pendants. Though Depp scores just about the film’s only laughs (all of them contained in a single sequence of a decapitation gone askew), he’s also the most expendable part of the movie. Sparrow has gone from the movie’s main driving force to its unfortunate raison d’être, his showboating antics out of a Benny Hill sketch apparently reason enough to build an entire franchise around it when it’s clear that no one (not even Depp) is still into it.

The Pirates franchise does stand alone in the landscape thanks to its setting. It’s a little surprising that no one else tried to jump the seafaring bandwagon, but it’s also clear that the gritty nautical milieu is more a crutch than anything at this point. I like pirates and boats and English character actors with gross teeth and peglegs as much as anyone, but this installment is as much of an inky, deep-CGI clusterfuck filled with bright lights and glossy surfaces that have way more to do with the Transformers series than Errol Flynn. At this rate, Disney might as well start to consider a crossover – there appear to be medieval knights in the new Transformers, anyway. (Other potential crossover ideas include Wild Wild West-style steampunk spiders, ninjas, dragons and the prison from Orange Is the New Black.)

Amongst the many perplexing decisions made by Dead Men Tell No Tales is the  recasting of the “young, non-explicitly pirate” parts with Bloom and Knightley analogues that the film clearly has no use for. Thwaites and Scodelario are an integral part of the action, yet I wouldn’t be able to describe a single trait of their characters or recall any of the actions they pose throughout. It feels like Dead Men Tell No Tales could introduce a new lead character every 10 minutes for the entirety of its running time without affecting the structural integrity of the plot. Thankfully, they limit themselves to a gratuitous cameo from Paul McCartney in what basically amounts to a MTV Movie Awards interstitial dropped in the middle of the whole mess.

I think there’s still an instinct ingrained in me that suggests that a big blockbuster like this one is always going to be somewhat entertaining, no matter how bad. It’s as if the mechanics of group-engineered crowd-pleasing are almost failure-proof, and as long as shit keeps exploding and Johnny Depp keeps getting hit in the nuts with a cannon, I won’t be bored. This isn’t true. Dead Men Tell No Tales is boring. It’s competent, yeah, and it looks nice and has famous people with cool hats on, but that’s not a movie. It’s barely a fucking perfume ad. ■

Pirates of the Caribbean: Dead Men Tell No Tales opens in theatres on Friday, May 26. Watch the trailer here: