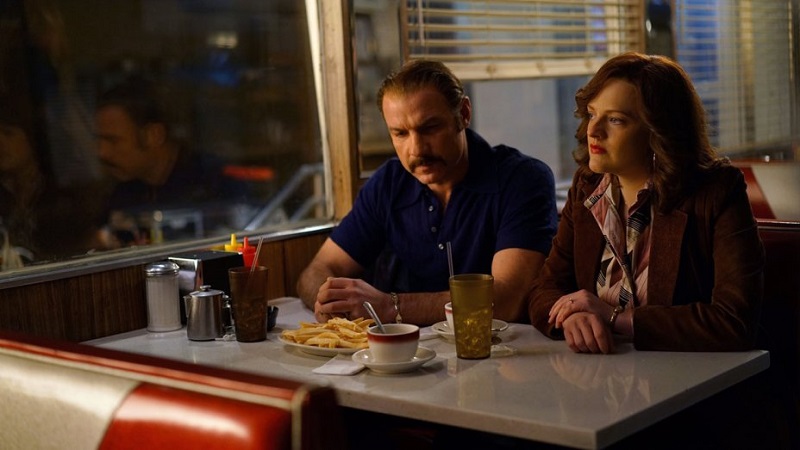 Boxer Chuck Wepner is best known for going head-to-head with Muhammad Ali in 1975. Though Ali clearly had the upper hand on the older and more worn-down Wepner, the bout has entered boxing lore for the sheer improbability of its odds. There’s more to the Wepner tale than that, however: A year after his fight, a little movie by the name of Rocky came out and its star and writer, Sylvester Stallone, admitted to having been inspired by Wepner’s underdog status when writing the film.

That’s basically all it took for Wepner (played in the film by Liev Schreiber) to rebrand himself as the “real Rocky”. Philippe Falardeau’s film Chuck charts Wepner’s life going from run-of-the-mill Jersey mook to his bout with Ali (played by Pooch Hall), his tumultuous second marriage (of three) to Phyllis (Elisabeth Moss, great), his rise to second-tier fame, his hard-partying ways with his best friend John (Jim Gaffigan), his descent into substance abuse, his tumultuous relationship with both the image of Sylvester Stallone and the real guy (played by Morgan Spector) and his third marriage to Linda (Naomi Watts). “Chuck had a lot of problems with celebrity,” says Falardeau. “But it wasn’t when he fought Ali. It was after Rocky came out.”

Though essentially a biopic, the film has a rollicking, fast-paced sense of style that felt to me like Falardeau cutting loose. “When I got the script, it certainly was fun to read,” says Falardeau. “The character, in spite of his flaws, created so much empathy in me as a reader. On paper, you know, he’s kind of rough, but he remains likeable. I liked that contradiction. The next day, I woke up still having that script kicking around in my mind. When I called the producers, I framed it this way: the movie has to, no matter what, remain playful and generous. Even though it’s dramatic, even though it deals with some pretty rough stuff, it has to remain playful. It can’t be pretentious. It can’t be pamphleteering; this isn’t a pamphleteering kind of guy. He’s pretty linear, and the film has to reflect that. We can’t be apologetic about it, we have to tackle it head-on. And in that sense, as you said, the setting of the ’70s allows that. The ’70s are sort of sexy and dirty, and the look and music of the period allows us to go for that tone.”

Although an American production with big names attached, Chuck (originally titled The Bleeder, then retitled after the release of the similarly titled boxing film Bleed for This) was a modestly budgeted production shooting within a tight timeframe — especially considering that Schreiber was spending hours in the make-up chair each day. “I had about a 20-day shoot, all things considered,” says Falardeau. “It was guerrilla-style. The aesthetics that Nicolas Bolduc and I decided on was very guerrilla-style as well, with all of the handheld camerawork, but it fit the character as well. We stayed close on him; Liev really liked this kind of physical dance he had with the camera. In the end, as silly as it sounds to say, it ended up helping us.”

Many of the top Quebec directors who have moved to making American movies speak of the opportunities it affords them: higher budgets, access to a different talent pool, telling stories with a scope that Quebec history or society doesn’t really allow. But Falardeau made an American movie with what’s essentially a Quebec-adjacent budget. “Do you remember Patrick Huard’s character in Funkytown?” he asks. “He was based on a real character, too, so from a pure material point of view something like that is possible. But what I was interested in was the whole American myth of these slightly gangsterish, East Coast characters. Despite the fact that I’m a French-speaking Québécois filmmaker, it’s something that seeps into our culture here. We remain in North America; we’ve seen the movies. We have it in us. To make this movie in the States was a way to explore that part of myself. None of that negates that I’m Canadian or Québécois, but we’re much more North American here than we are European. Going to the States for a project like this isn’t for the money. I could have this much money on a project here in Quebec.”

Falardeau readily admits that he wasn’t particularly enamoured with boxing before taking on the project – and he hadn’t really heard of Chuck Wepner, either. “There’s a certain mise-en-abîme of boxing in cinema in the film,” he says, referring to the fact that the first Rocky film figures heavily in the plot. “This forced me to confront the fact that I had to decide exactly how I’d film the fights. I stopped myself from watching the majority of boxing movies, because I wanted to avoid seeing how boxing was filmed previously. I watched the real fight and I told Liev, who’s actually an amateur boxer who has loved boxing for years, that I noticed that in real life, boxing isn’t nearly as surgical and spectacular. It’s slow, it’s messy, not much happens and suddenly — boom! That’s what I’m interested in. In Rocky, for example, it’s just bang-bang-bang-bang! Those types of punches don’t really exist. I was interested in approaching the fights from an almost documentary perspective, and also interested in exploring the mythology of boxing in film over the years and the idea of wanting to become famous by living up to an image of yourself that was created by Hollywood.

“I was pretty young when Rocky came out,” he continues. “But what I liked about it was that he lost at the end, which was a new thing for someone like me who was mostly used to typical American films. That’s what made Rocky such an interesting drama. When I look at it now, the parallels are obvious. But beyond that, I have to be honest: Rocky Balboa is an introverted, insecure character. He’s a little depressed. Chuck Wepner, on the other hand, is never depressed. He’s a very confident guy. We can’t say that Chuck is Rocky Balboa, they’re absolutely two different people. That’s where the narcissistic, mythomaniac aspects of Chuck’s personality are interesting.”

Chuck Wepner is still alive. He even appears briefly as himself at the end of the film, a fitting coda to a biopic of a man somewhat consumed by his own desire for celebrity. “I had dinner with Chuck a couple of times before shooting,” says Falardeau. “It was important for me to do that, to ask him questions. Chuck would’ve loved for me to make a triumphant boxing movie — he didn’t get it. (laughs) He remains very gentlemanly about it, he defends the film and defends us, but I’m not blind — it can’t be easy for him to see this movie and take a couple of hits during some of the scenes. He doesn’t always come off well. That having been said, we have to remember that what he accomplished in the fight with Ali is pretty much unique. To stand up for 15 rounds and persevere through the whole fight despite his inferior technical talents — and to have turned the crowd to his side, too! That’s why I insisted to have the archival man-on-the-street segments at the beginning. Everyone thought he was going to lose.” ■

Chuck opens in theatres on Friday, May 19. Watch the trailer here: