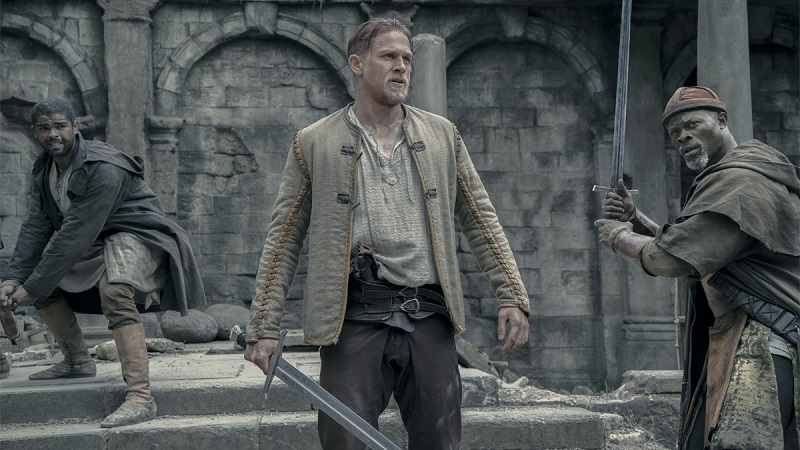 Us fantasy folk are severely under-nourished these days. It’s all about space and superheroes, when all we want are dragons and wizards. Fear not, for here comes our knight in shining armour, Guy Ritchie, riding in with the first in a planned series of films based on the Arthurian epic.

King Arthur: Legend of the Sword is an origin story, clambering about at break-neck speed from the birth to the rise of the mythical king, played here by the mythically muscled Charlie Hunnam. Ritchie drops you off in a murky, gritty version of Camelot where giant elephants are stomping around, controlled by Mordred, a magician with absolutely no back-story, but shining red eyes and an antler crown. King Uther Pendragon (Eric Bana) throws his son into the river like baby Moses before being betrayed and killed by his power-hungry brother Vortigern (a frowning but convincing Jude Law). Will baby Arthur grow up into a beautiful, heroic man who saves the kingdom from this pseudo-evil man? Ah, I’m not telling!

Forget anything you might know about the legendary tale. From the epic poems and countless books to Helen Mirren as a slinking, seductive sorceress in Excalibur and the silly knights of Monty Python and the Holy Grail, there’s no shortage of source material for Ritchie to play with. “Vincent Van Gogh!” I imagine he yelled with disarming Cockney charm, before deciding to take bits and bobs and making his own lad-approved version of the story.

Goodbye noble Arthur, hello potty-mouthed man, raised by prostitutes and roughhousing with a gang of medieval gangsters stuck with ridiculous names like Wet Stick or Back Lack. Is that David Beckham with a sword? Of course it is!

A mysterious lady Mage with an unspecified European accent (Astrid Bergès-Frisbey) stands in for Merlin, who earns a brief namedrop that probably foreshadows a grand entrance in a later film. My favourite addition to the tale is probably the Ursula-like, Jabba the Hutt of the sea who Vortigern feeds family members to in exchange for greater power. Nom-nom! The “dangerous” Vikings who resemble bearded, man-bunned marketing types on a particularly adventurous off-site are also quite amusing.

If you’re not a fan of Ritchie’s style, there’s nothing for you here. The film almost feels divided into choppy, fun vignettes. Nothing is linear; everything is explained in cleverly narrated flashbacks, edited like the opening scene of Lock, Stock and Two Smoking Barrels. In a way, Ritchie is constantly repeating that scene, stuck in a Groundhog Day of his own making. The stakes are higher, there’s a mystical Celtic soundtrack and a giant snake, but he’s still just telling the story of fast-talking crooks that mean well.

The result is certainly flawed. There are many plot holes and unexplained details that you might notice if you walked in wearing your thinking cap. With a potential total of five more films in the making, one imagines Ritchie is keeping a thing or two up his sleeve. But ’tis the season for more flash for your cash, and this definitely delivers that. What else would you want in a summer blockbuster than a thrilling two-hour romp with magic, witty repartee, bloody violence and a whole lot of silliness and CGI? In my books, it’s never a bad day for magical swordplay. ■

King Arthur: Legend of the Sword is in theatres Friday, May 12. Watch the trailer here: