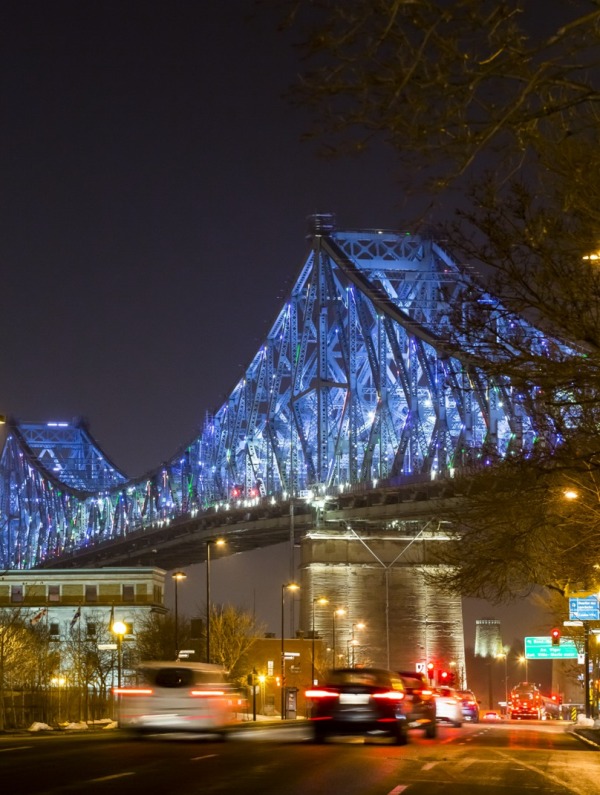 Photo courtesy of the Jacques Cartier and Champlain Bridges Incorporated

UPDATE: An encore presentation of this event is happening on Sunday, June 25.

Montreal’s 375th anniversary celebration is kicking into high gear next week with the opening show of the lighting of the Jacques Cartier Bridge on Wednesday, May 17 at 9:45 p.m. only.

Although the city’s birthday bash has been underway all year, with 375 copresenting a number of big and small events around town (notably Igloofest and Nuit Blanche), the illumination of the bridge marks the anniversary date of Montreal’s founding, with a summer of activity to follow. In that spirit, the show promises to be as festive as it is ceremonial.

With a nod to its own history, that of the city and the passage of time itself, the first part of the bridge’s lighting will be accompanied by some fittingly majestic prerecorded music performed by l’Orchestre métropolitain, as conducted by Yannick Nézet-Séguin.

Following this six-minute classical intro will be a 24-minute set of curated contemporary music by local artists, namely Alaclair Ensemble, Galaxie, Valaire/Kwenders (a collaboration between Misteur Valaire and Pierre Kwenders) and Kid Koala. The music will be broadcast with the participation of the assembled crowd and an app called AmpMe, which synchronizes the playback of musical selections to an unlimited number of mobile devices.

The Society for the 375th anniversary has shared the following instructions for audience members who want to be part of the show:

1. Download the AmpMe app (iOS and Android) before the event.

2. On May 17, from 8 p.m., meet at the Quai de l’Horloge or Place Jacques-Quartier and spot one of the AmpMe agents to obtain a loudspeaker, 5,000 of which will be available free of charge. Note that you can get a speaker (first come, first served) by demonstrating that the app is actually uploaded to your device. You can also bring your own.

3. Connect the bluetooth speaker to your device.

4. Open the app and connect to ViveMtl375. At 9:45 pm, AmpMe will synchronize all phones and speakers to form a giant sound system.

Alternately, participants (and off-site listeners in the Montreal area) can tune in to the 24-minute soundtrack live on Rouge FM 107.3.