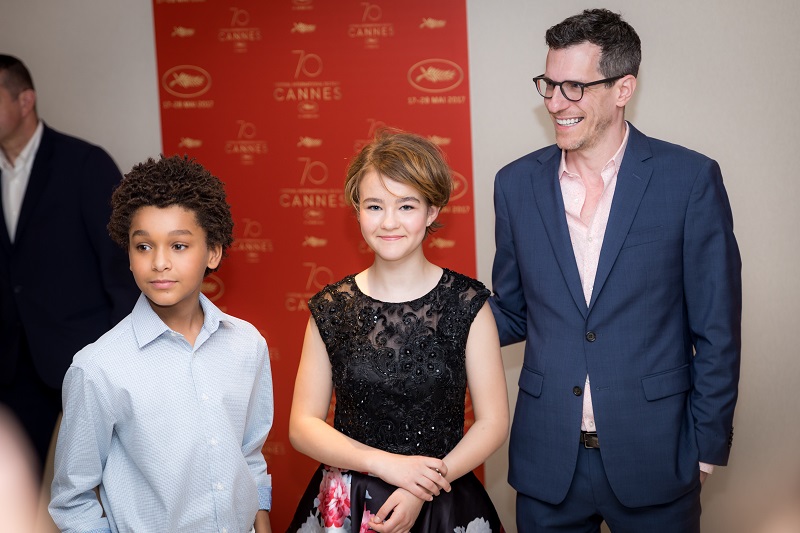 (UPDATE: Neluybov went on to win the festival’s Jury Prize.)

The Cannes Film Festival competition program opened on Wednesday with an assault on festivalgoers’ heartstrings. In Andrey Zvyagintsev’s Neluybov, parents confront their own egotism after their 12-year-old son Alyosha (Matvey Novikov) disappears. In Todd Haynes’s Wonderstruck, two children, in 1927 and in 1977, escape their lonely lives to New York. Both tales offer inspired flashes of style that make up for their heavy-handed emotional and political messages.

In one early, powerful scene in Neluybov, Alyosha’s bourgeois parents Zhenya (Maryana Spivak) and Boris (Alexey Rozin) bicker about who is going to tell him that he is to be sent to an orphanage so both can move on to new lives with their new lovers after the divorce. Zhenya goes to pee. As she exits the bathroom, the door closes behind her, revealing Alyosha, his face twisted in a silent scream. He has heard the entire conversation. He walks out after breakfast the next day.

The film offers many uncanny moments of irredeemable grief such as this. Unfortunately, they are undercut by didactic sociopolitical commentary. Before the parents notice that Alyosha is gone, they spend another 24 hours going through their daily activities, meant to stand for the narcissism of middle-class Russia in the Internet Age. Zhenya’s closest friend is her Instagram: she constantly scans the feed and posts selfies. Boris ducks relationship talk with his pregnant girlfriend and fears his devout boss who forbids divorces among employees. By the end of the film, when TV starts spouting propaganda about the war in Ukraine, we are no longer sure whether we should see the family as human beings or a statistic.

The messy family tragedy is all the more jarring because it unfolds in a beautiful world full of carefully constructed colour, Zvyagintsev’s signature device — see Elena, for example: from Alyosha’s red jacket to his steely sterile apartment to the white snowy branches outside to the purple juice his father gets every day in his corporate cafeteria. The parents turn to a volunteer rescue team (based on a real organization, Liza Alert) that finds 80 per cent of all disappeared people in Russia annually. Volunteers conduct a relentless search, in apartment houses, woods and the ruins of an abandoned building. Their selfless dedication to children of strangers suggests a hopeful alternative future. But their impersonal professionalism parallels Zvyagintsev’s cold eye. Their protracted search only deepens our sense of despair.

The cute runaway children in Wonderstruck are not meant to be as believable as Alyosha. Todd Haynes recreates his two period worlds as make-believe models, akin to the skyscrapers Rosa (Millicent Simmonds) builds in 1927 out of movie fan magazines and lip-reading manuals. Rosa is deaf. Ben (Oakes Fegley), her 1977 counterpart, loses hearing after being struck by lightning–an event that plays out as if triggered by magic. As the film narrates their parallel quests, it investigates two forms of experience: living without sound and watching silent cinema.

Based on Brian Selznick’s juvenile fiction, Wonderstruck reminds less of Haynes’s grown-up period films than of Martin Scorsese’s Hugo, also based on a Selznick novel. Both offer a homage to silent cinema: Scorsese, to French film fantasy pioneer Georges Méliès; Haynes, to silent melodrama, its female stars and their fans. Rosa keeps a scrapbook of movie star portraits, a variation on a theme of collecting and curating that runs through the story. She crosses from New Jersey to New York in search of an actress, Lillian Mayhew (Julianne Moore). Rosa’s world, like the movies of the time, is black and white.

In the meantime, Ben navigates 1970s New York, tinged with Afro-Caribbean fashions of the day. Ben arrives on a bus from rural Minnesota to seek a father he never knew, after his mother, a librarian, dies in a car accident. The clues he has found point to a bookstore and the American Museum of Natural History. Rosa ends up in the museum as well and their stories unfold in the same space, 50 years apart, sometimes in parallel scenes, sometimes in momentary flashes of black-and-white and colour.

The film’s plays of colour and, especially, sound make up for its neat and sentimental resolution. Rosa’s experience unfolds as a silent film with an orchestral music accompaniment. Ben’s New York switches between his newly deaf perspective, music score, and the sounds of the street–a symphony composed of funk music, urban noises and nearly complete silence. The film, especially in its soundtrack, seeks to impart respect and appreciation for the deaf perspective. Ben, for one, adjusts to being deaf without much distress. As he explains to a boy he befriends at the museum, “Mostly, it’s just quiet.”

Although rooted in particular historical eras, the two films’ opposing moods have less to do with Russian and American realities than with aesthetic interests of their creators. The actual experience of childhood exists somewhere in between. As the search for Alyosha pushes on, one wants to believe that the kid stepped out from Zvyagintsev’s loveless winter into the bright and warm 1970s created by Todd Haynes. ■