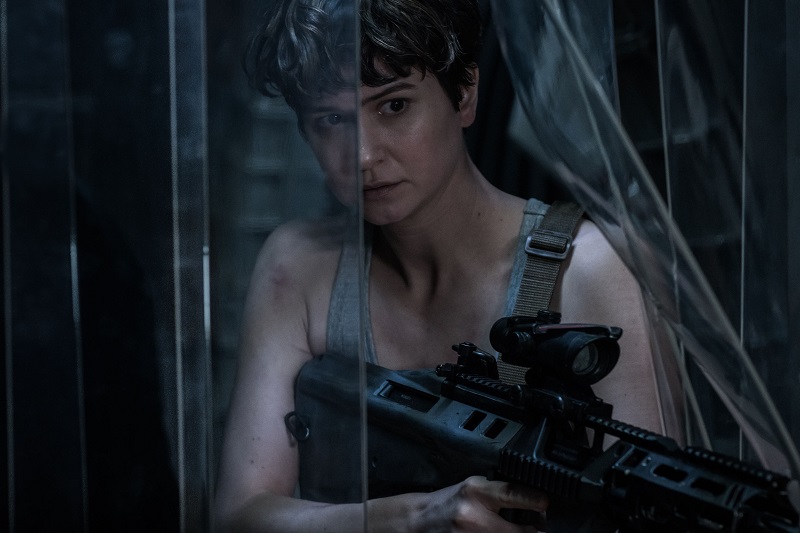 The impact of the Alien series on mainstream filmmaking is so immense that, for a second, I forgot that Alien: Covenant was part of the Alien series. Let me rephrase that: Alien: Covenant is so indebted to its own history that it feels like it’s progressively ripping itself off. That’s no mean feat, and it’s a very weird place for the world’s patchiest franchise to find itself in at this point in time. Just in the last year, Life and Passengers were released; both hold clear debts to the Alien franchise, and both make Alien: Covenant feel somewhat redundant, even considering that Covenant is coming at these elements somewhat more organically.

A direct sequel to Prometheus (and thus an indirect prequel to the 1979 original), Alien: Covenant is set 10 years after the events of that film. A spaceship (the titular Covenant) is sent into space with the hopes of colonizing a new world they’re told is just like Earth. The ship is peopled with couples in its cargo and its crew, though things are off to a rough start when an unforeseen malfunction forces an emergency reawakening of the cryogenically frozen crew.

The captain (played, in an uncredited cameo, by a certain overworked multi-hyphenate I shan’t dare mention for fear of ruining the surprise) is burnt to a crisp in the process, forcing his religious second-in-command (Billy Crudup) to helm the ship alongside the android Walter (Michael Fassbender) and a ragtag crew that includes the captain’s grieving wife Daniels (Katherine Waterston), cowboy-hatted pilot Tennessee (Danny McBride) and a bunch of other poorly defined characters.

Almost immediately after being awakened, the captain intercepts a signal (well, actually, someone humming John Denver’s “Take Me Home, Country Roads”) from a planet much closer than the target planet that seems habitable. It’s too good to be true, of course, since there are facehuggers and chestbursters and all kinds of goopy, ectoplasmic bad guys on there — and David (also Fassbender), the android who proves to be the sole survivor of the events from Prometheus.

If Prometheus suffered from an overload of ambition that ultimately doomed it to be a bunch of memorable moments glommed together in a portentous whole, Covenant actually has the opposite problem. Its economy of storytelling dooms it to feel like a familiar retread at first, one of a million space movies about a ragtag group that encounters trouble along the way. Considering one of the recurring criticisms of Prometheus was its almost-complete abandonment of horror tropes, no one is particularly surprised that Covenant returns to the well, but the result is extremely familiar. Ridley Scott is, of course, still one of the prime helmers of this type of derivative genre cinema, but the best thing I can say about the first third of Covenant is that it’s slickly delivered.

Life was also slickly delivered but it didn’t quite delve into the kind of shit that Scott gets to as Covenant progresses. From a derivative but propulsive first act, the film moves into a truly perplexing second act that sees Scott delve half-assedly into headier matters and pretty much directly reference Blade Runner in such a bizarre, circuitous way that I suspect he may have some residual regret over handing the reins of that forthcoming sequel over to Denis Villeneuve. Weird and incongruous as it is, the second act is certainly singular and unexpected, containing really the only truly interesting texture in the two hours of competent, gripping nothingness that is the rest of the film.

Most of Alien: Covenant’s problems essentially stem from the fact that, while it certainly sows the seeds to be about something, it never really quite follows through with its ideas. The film starts off with the idea that all of the crew members are married, but once the shit hits the fan, it spends absolutely no time exploring that idea. Early on, Crudup’s character expresses concern that his position as captain might be challenged because he’s a man of faith; that intriguing idea is never mentioned again. Fassbender finally gets to stretch his wings in what eventually turns out to be a dual role, but the script calls for too much moustache-twirling to truly present compelling moral quandaries. The film seems torn between text and texture, awkwardly dipping its toes in broader ideas before quickly retreating into chest-bursting anarchy. In a perfect world, I’d get both from an Alien movie this far down the line. Here, you’re lucky if you get one or the other.

Much like Prometheus, Covenant is divided by its desire to make the audience think and make the audience scream. It never quite resolves that desire, but the most frustrating thing is that it does pretty well at both in an intermittent, scattershot way. Alien: Covenant is not a bad movie in the traditional sense, but it is a mess.  ■

Alien: Covenant opens in theatres on Friday, May 19. Watch the trailer here: