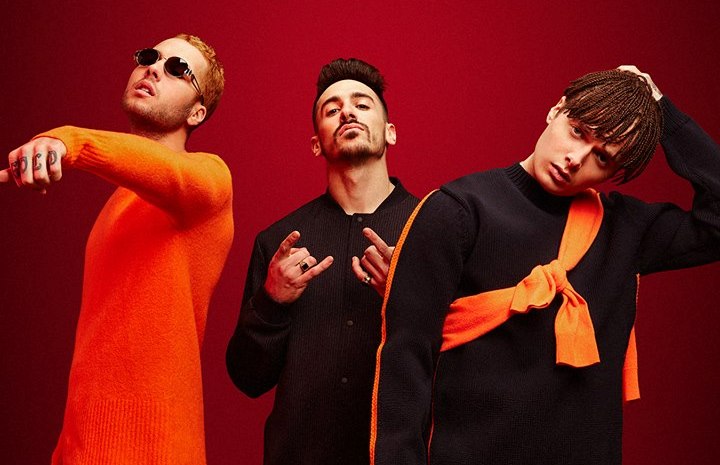 You’d think a group of ex-punks called Ragers — who switched it up to live, hip hop-rooted electronic music, are known to wear freaky masks on stage and wear custom, “666” emblazoned biker vests in public — would rip apart your apartment on a Monday evening just on principle.

But the group is pensive and soft-spoken as they prepared to release their new, third EP, Joshua. Producer/programmer Jake PST, his brother and Ragers drummer Jay PST and their live hype man Billy Eff, all in their mid/late 20s, are lounged out comfortably on hand-me-down parent furniture explaining their roots in punk and their mid-aughts showbiz experience as Duke Squad. (Absent is guitarist Phil MG.)

“We don’t care about the dough anymore because they’re all sharks,” Jake says, explaining how a deal with Universal soured for them under shady management. “You get in the music business and it’s all that. Back then, we were those kids who just wanted to play the Vans Warped Tour.”

The disappointment turned to anger and Ragers were born. “It came from being mad,” Jake explains. “That’s actually the rage. If you have a vision, nobody’s gonna fuckin’ stop it. When everything fucked up with the old band, we had a new band within two weeks.”

“It was a life changer,” adds Jay. “The masks were about that transition. We didn’t want (to be) a ‘second band.’ It was a different band.”

Word of Ragers as a live act to watch out for began to spread around 2014. As the group found their new footing they made friends with rising Montreal-based hip hop trio the Posterz and other bands within a similar grassroots, self-managed circle — talents essentially independently responsible for their own internal artist development.

“When you’re knocking at doors constantly and everyone is like, ‘We really like what you do, but I don’t think I can market that,’ you learn to adapt and not feed into the machine that you see dying right in front of your eyes,” Billy explains. “You get a bunch of your friends together and you try to build a new one! And sometimes it sucks. We have friends that go out and tour and come back home and they’re still broke and have to move back in with their parents.”

While we don’t discuss their particular living arrangements, Ragers do have the benefit of their earlier experience in the business and ties to Los Angeles, where they regularly record. They’re clear, honest and proud of the fact that that gives them an earned advantage over other locals trying to see the light outside Montreal.

It also doesn’t hurt that James DiSalvio, the mind behind Bran Van 3000, fucks with them. Later this year, Ragers and DiSalvio unveil a special collaborative piece as part of Montreal’s anniversary celebration, on which Quebec legend Diane Dufresne also features. The early draft is, to say the least, magnificent. James is our mentor,” Billy states plainly.

And California, they all agree, is where it’s at. Jay, a gifted drummer, currently studies music at Berkeley online, and would love to get into the on-campus program if time allowed it.

“To compare Montreal to L.A., the magic happens there,” Jake enthuses. “I’d like to travel the whole world, but in L.A., on the daily, we’d be chilling with Prodigal Sun in the studio in Sherman Oaks. Then the next day we’d write a song with James and Abraham (Laboriel), Michael Jackson’s bassist. Or Kim Bullard, Elton John’s keyboardist, came to the studio and wrote a sick part on the keys. Then the next day you would hear, like, Future at the house in the back. He was doing a porno on the patio. Things happen. You don’t see that shit here.”

“All the bands that were big (in the ’90s) were big here, because they’d do shows and fans were proud of them,” Billy reasons. “Now if you want people in Montreal to really fuck with you, you gotta make it big somewhere else, and then they’re like, ‘Oh yeah, I remember going to his show once, three years ago. And I asked for guest-list because I didn’t wanna pay the $5 cover!’”

Jake looks at it a different way. “Even though it’s the music business, and business is 50 per cent of it, I believe the music is way more important, even if the management is strong,” he says. “The fan is gonna listen to a song and that’s gonna create a moment. If you can’t make people relate to your shit, you’re not gonna get out of any fuckin’ market whether it’s Montreal or Toronto or L.A.”

But Montreal is home, they agree, no matter what. “I don’t think you gotta be that kid from the Internet, from nowhere,” laughs Jake. “You gotta be based somewhere.”

Behind the rage and the masks, the dream and vision are real. “If we ever get to that level,” Billy reflects, “where we can make music all day and chill and do what we want to do while working on shit, I know that I’d be pretty fuckin’ happy.” ■