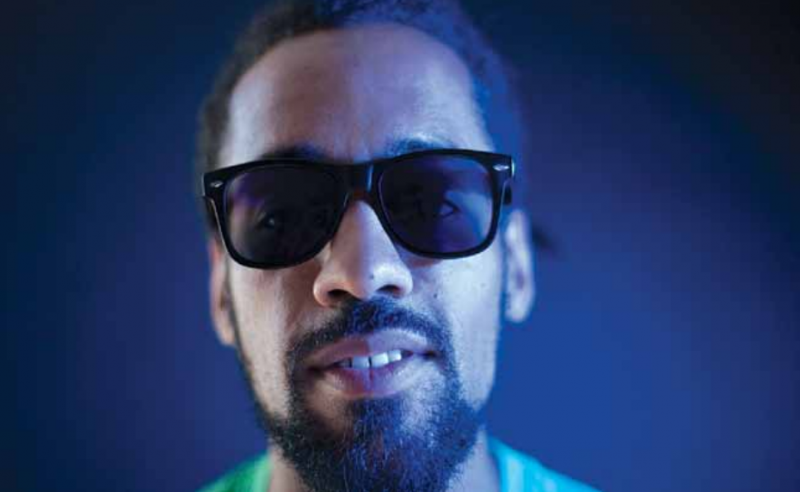 KNLO is that poet-nomad, that friendly face around town that smiles and says hi, but manages to remain reclusive even in public. He has a beat for every mood, a mood for every rhyme and a twinkle in his eye you can’t quite grasp.

The Alaclair Ensemble MC, who’s spent the last decade honing a prodigious talent for making big, wobbly laptop beats, released his first solo LP in a decade, Long Jeu — a veritable roadmap through hip hop and all its styles — in late 2016.

By any standard, it’s also the most Montréalais rap record in recent history, which in a genre that wears its city on its sleeve (wherever it’s made) is no mean feat. He laughs when I suggest that his name may be short for “Kenard Lohen.”

“I definitely relate to that kind of vision in my music, alone or with Alaclair,” the soft-spoken giant offers humbly. “We ain’t on no bullshit. When it’s time to do music, words, my concept of music is to take it back to tribes, belonging, where you’re at and who you’re with. You can’t have music without that.”

KNLO brings his colourful creation to life this Saturday at Artgang for a one-off show tailored to create a vibe where who feels, knows.

Here’s some of what he had to say about the album, the show, his city and playing the long game.

LE LONG JEU
“I felt a certain regret after a while from not writing songs, just writing bars or just [being] into beats, until I felt a kind of vertigo. Like, it might be gone, you know what I mean? I had a type of sadness that became a resolution, like, pick it up from where I left off in 2007 when I stopped making solo vocal projects. The title came after, but the idea was to sit down as writers do. In rap, you gotta be ready whenever. You can’t wait for perfect studio conditions. So I just put a little work in every day and it started to come together.”

LA VILLE
“Coming back to the hood has been my life, with my brothers, on whatever adventure. It was a way to address it without addressing it. An exorcism of sorts. I’m always on the move. And moving here (from Quebec City), I mean a lot of Montrealers are Montrealers by adoption, too, though I’ve always spent a lot of time here. Writing this record happened in the moment that I became truly conscious of my adopted city, the different neighbourhoods, my years living in Hochelaga-Maisonneuve. I feel at home. I know everyone from the deputies to the bottomed-out crackheads. It’s really what it is — I can’t lie about that stuff.”

LE SHOW
“All year, (Alaclair Ensemble) did shows and tours where we were invited to different settings, and since I’ve returned to rapping I had the idea to do at least one or two shows of my own where I create a unique vibe. There’s a few goodies that haven’t been added to the flyer yet, mad visuals by Fab here and there, all over the place. Gather the family, have them take part, find those links between our projects and collabs. Sev Dee will be with me onstage and opening is (rapper/ Alaclair fam) Modlee. She’s my sister and I’m really happy to have her out with me — she hasn’t played much and her vibe is amazing. Everyone will have their set but we’ll have new pieces, an (Artbeat) roundtable style showcase with some new young cats.”

LE STRUGGLE EST STRONG
“I love music from all over, so when I get into it I don’t care too much about what other people are gonna think. By 2016, I think we hit an overload of struggle-rap, and the struggles are real, but in every song I get a bit deep and hit moments that put the strength into the message, too.” ■