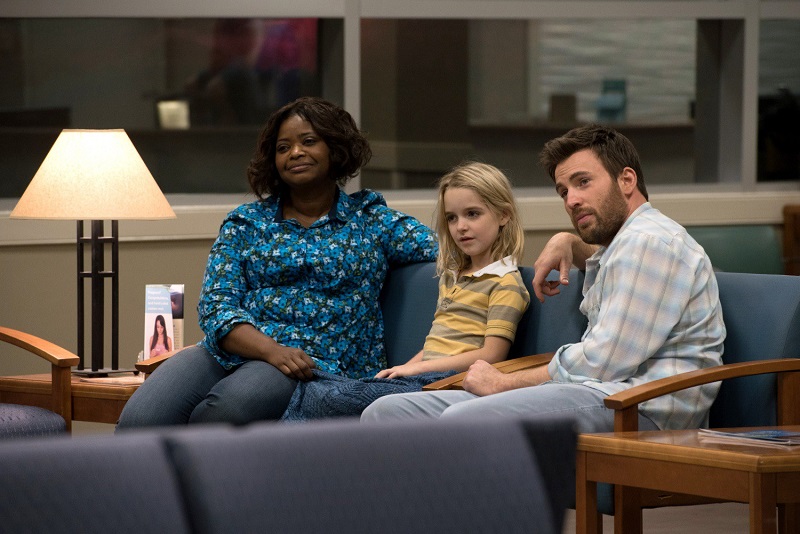 There’s a one-eyed cat named Fred in Gifted. Fred is real cute, but he’s also symbolic of most of the problems contained within this sentimental riff on the Good Will Hunting formula. There’s an inordinate amount of reaction shots of Fred in the film’s first act — more one-eyed-cat reaction shots than could ever be expected from any movie that isn’t called Fred the One-Eyed Cat. This immediately set off warning bells in my mind — something is going to happen to this cat. This cat will become important, somehow. And suddenly, all the pieces fall into play. I began to see every movable piece and the way the rest of the movie was going to play out.

Gifted is not anywhere near a terrible movie, but it’s something somehow more galling: an obvious movie-movie, seemingly traced off a screenwriting manual and submitted as a thesis project. On all fronts, it’s a well-crafted script — it’d get a great grade, I’m sure. But it stinks of formalism and conformity in a way that suggests it could never truly be anything other than a merely okay movie.

It’s easy to see why someone like Chris Evans would be attracted to a project like Gifted. Being tied to the ever-expanding Marvel Cinematic Universe doesn’t give him that much free time to explore other avenues, and since he was one of the least well-established actors to take on a role in The Avengers, starring in some ill-advised, it’s-risky-but-it-could-work Southland Tales business could actually hurt his career a fair bit. Gifted is a sound choice exactly because it kind of sucks a little bit: it’s so safe that it’s all there on the page. It’s extremely easy to visualize the movie as a movie, and therefore it’s extremely hard to see it as a total wash, which of course it isn’t. But it’s also safe and by-the-numbers in a way that’s almost worse.

Frank Adler (Evans) lives in a modest Florida home with his seven-year-old niece Mary (Mckenna Grace), who ranks extremely high on the scale of Precocious Movie Children. Mary is unusually bright for her age, which makes her entry into first grade pretty rough. Her teacher Bonnie (Jenny Slate) suggests to Frank that Mary may be gifted with an almost supernatural ability to comprehend mathematics – something, of course, that Frank knows, because his late sister (Mary’s mom) was a troubled mathematics genius who apparently ended her life due to the mounting pressures of being a precocious genius. (Frank also has some added guilt since his sister called him on the night that she committed suicide, but he bailed to go on a date.) Frank desperately wants Mary to live a normal life, but that plan gets complicated when his hoity-toity mother (Lindsay Duncan), a gifted mathematician in her own right, re-enters the picture with a desire to shepherd Mary down the road her mother took.

Both Evans and Grace are likeable and charismatic performers who infuse these sometimes schematic characters (it turns out there’s a reason why Frank is weirdly philosophical all the time, considering he’s a boat repairman) with a lot of warmth. Same thing goes for the setting; director Marc Webb actually dares to make his characters’ modest living actually seem modest, as opposed to the facsimile of modesty and poverty usually mustered up by Hollywood films. The low-key envelope that Gifted is delivered in betrays its overly schematic script, which does have the distinction of borrowing from films that get pilfered with less regularity than most. A cross between Good Willing Hunting, I Am Sam and Mike Binder’s abysmal Black or White (Octavia Spencer is even in both, though she gets demoted from mean grandma to kindly neighbor here) sounds like it would be cloying and saccharine — it’s no surprise that Gifted shares those traits.

There’s nothing wrong with a feel-good film. Though I’ll admit that my personal tastes tend to skew towards the feel-bad, I’ve been known to enjoy a little triumphant run through the wheat or whatever. The problem with Gifted is not so much its intentions as the way it gets there; the motions taken to hold the audience’s hand and guide it through every little screenwriter’s hoop are so transparent that the film is almost impossible to fully engage with. When I started doing this job with some regularity, I was 100 per cent ready to completely abandon the notion of suspension of disbelief. I was certain that seeing two to three movies each week (some of which I had zero interest in seeing) would calcify my already blasé heart. The opposite actually happened: I sometimes find my heart skipping a beat at a suspenseful or dramatic scene in a movie that I’m not even enjoying. Gifted offered me none of that — I knew from the get-go that everything would be fine.

And for those of you worried about the cat, don’t. He turns out to be fine.■