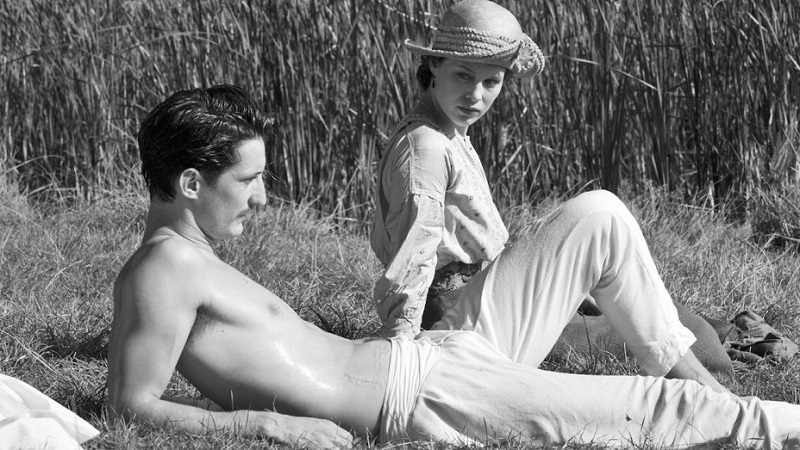 One could see Frantz as a bit of a departure for François Ozon. The prolific French filmmaker is probably best known for films like Swimming Pool and Jeune et jolie — sexually provocative dramas that also often comment on contemporary French society. Frantz seems somewhat more austere in comparison, though it still retains a certain edge.

Paula Beer stars as Anna, a young German woman whose fiancé (the titular Frantz) never returned from WWI. Grieving at his tombstone one day, she notices the presence of a mysterious Frenchman (Pierre Niney) who also appears to be grieving. When she approaches him, she learns that he and Frantz were acquainted in France during the war. Adrien befriends Anna and Frantz’s grieving parents, but there may be more to the story than what Adrien is presenting.

“A friend told me about the play,” says Ozon. “I was very touched by this story of a young French soldier — or former soldier, rather — who goes to Germany to put flowers on the tomb of a dead German soldier. I found it both beautiful and mysterious, and I started working on an adaptation. That’s when I found out that Lubitsch had already adapted it.

“I was a little depressed — how could I expect to top Lubitsch? But when I saw Lubitsch’s film, I quickly noticed… he made the film in the ’30s, not knowing there was going to be a second World War. His perspective was completely different and his film — like Maurice Rostand’s play — is told from the perspective of the Frenchman. In the Lubitsch film, you know from the very beginning what his reasons for going to Germany are. I thought it was more interesting to see it from the German characters’ point-of-view.”

Ozon’s desire to make a film about secrets and lies stemmed from a very contemporary concern with current society. “I feel like we’re in a period obsessed with truth and transparency,” he says. “Young people put their entire lives on Facebook and Twitter — everyone puts all of their pictures out there for the world to see. It’s something that leaves me uneasy. Even in politics, we need to know everything. I think it was important to speak to the idea that some things should be kept secret, be they facts or aspects of ourselves. The film takes it further than that, of course.”

The permissiveness of 2017 doesn’t necessarily change the text of Ozon’s adaptation, but it does colour it. “What was interesting to me was knowing that today’s audiences are not as naive as audiences in Lubitsch’s time,” explains Ozon. “It’s true that today’s audiences could extrapolate on the relationship between Adrien and Frantz and see things in it that audiences wouldn’t have seen in 1932. I’m definitely playing with that notion as a director. I was afraid that Lubitsch’s version would intimidate me, but then I saw that his film really was made for ’30s audiences, I knew that current audiences would see it differently. My film is a bit of a response to Lubitsch, 80 years later.”

Frantz is shot in black and white, though Ozon’s motivations go beyond paying homage to the film’s origins. “I wasn’t really interested in doing black-and-white at first,” he says. “Everything that we can see about WWI is black-and-white. In a naive way, we make the leap that people lived in black-and-white — it’s hard to imagine that period in colour. The black-and-white seemed more realistic to me in that way, and gave me the opportunity to make things a little slicker in terms of production design. It also corresponded to the feeling of grief that I wanted to convey. It’s hard to imagine bright, vibrant colours in this small German town when everyone is grieving.”

“I wasn’t necessarily afraid, but it would’ve been much more complicated if it was a film set in the Middle Ages, for example,” says Ozon when asked about the particular challenges of a film set in the 1910s. “There are lots of documents, films and so on that depict this period. What’s important is having the means to afford such a reconstitution. I was lucky enough to have them, but I also think that the black-and-white helps a lot.”

As with many films being released these days, Frantz has a certain aura of timeliness that Ozon says is absolutely accidental. “I had no idea that Trump would be elected, I had no idea that Brexit was going to happen. I was certainly feeling the rise of nationalism in France through the Le Pens — I was feeling the fear of the other, the political movements asking for new borders to be put up… My producers were reticent about yet another movie about WWI, but I told them that it speaks to us now as well. It’s about today, in an indirect way. We all know that history repeats itself.” ■