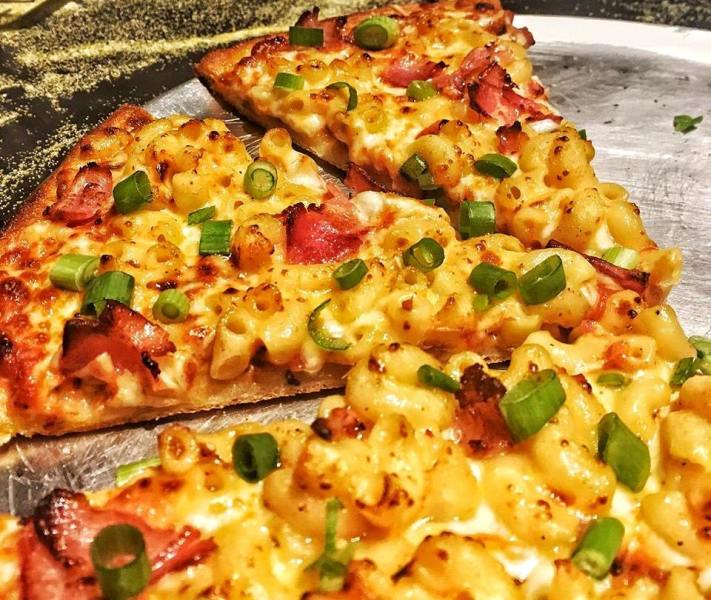 Dirty Pizza is the latest brainchild of munchies masterminds Billy Kontos and Dave Lee, the founders of Dirty Dogs. Situated near the crossroads of the Plateau and Mile End, the restaurant finds the Eat Dirty team taking their much-loved formula of gourmet ingredients, over-the-top flavours, and applying it to pies crafted from homemade dough and sauce, coated with deluxe cheeses.

However, the restaurant business was not always the plan for Kontos and Lee. Originally partnering up as concert bookers, the pair came together to form Wax Entertainment, which brought the likes of Boys Noize, Breakbot and Chromeo to the city for a number of unforgettable shows.

“We have very different personalities, which allows us to work well together,” Kontos says.

It was Lee who originally approached Kontos with a meal he’d made created drunkenly with friends, involving a delicious sausage in a hot dog bun. An instant hit among friends and family, the dirty dog underwent further testing during kitchen takeovers at dive bars and pubs. The restaurant finally became a reality in 2014.

Fast-forward two and a half years and Dirty Dogs has relocated to a larger space on St-Laurent Blvd. Dirty Pizza now occupies the original location at 25 Mont-Royal E. Unlike the more standard Montreal dirty pizza, there are no by-the-slice options, with the smallest pies instead being freshly made “minis.”

Products range from meat-lovers’ go-tos like the Notorious P.I.G. and le St. Laurent to a vegan option featuring a surprisingly delicious fake cheese. Of course, more traditional options are also available for those with less daring taste-buds, including an ironically dubbed All Dressed, which features far fewer toppings than most of the menu’s other pizzas.

Their favourite flavours? Kontos goes for an Italian-inspired Wise Guy, while Lee opts for the carb-heavy Mac Attack, noting that the oven placement of the macaroni augments the taste.

As for future plans, expect both restaurants to dive into the delivery scene, with Just Eat and Foodora being prospects in the coming weeks. The boys also hope to expand their brand with franchises across the city, and even the U.S.

Wherever the future may take the Eat Dirty brand, the team hopes to stay true to the values that have got them this far. “We’re still the same accessible dudes as always — it’s not hard to reach us,” Kontos says, just before biting into a St. Laurent slice. ■