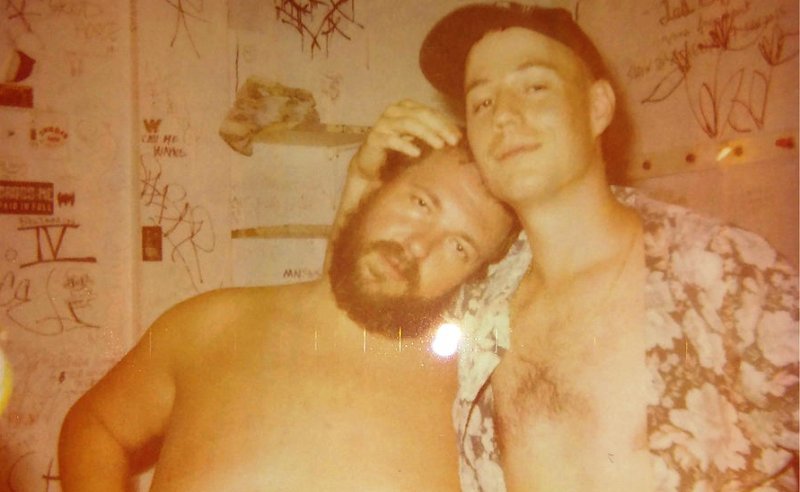 From the girls yelling “Beavah! Beavah!” at their shows in Germany to the network of goths who embraced the duo’s darkwave/synth-pop debut album Failure to the local late-night crowd they’ve been entertaining since 2012, Co/ ntry’s crowds have always had a hand in guiding the band’s creative moves. Being followed by DJ sets at afterhours parties moved them to start writing more dancey material, a direction they took to the extreme with their first attempt at a second album.

“Originally we were trying to do a techno record called Techno Prisoners,” says David Whitten (aka Mr. Lavender). “We recorded 10 tracks as one three-hour jam session, and we were so attached to the first performances of the tracks.

“We had the album pretty much finished a year ago, but we didn’t record in a way that enabled us to form the material into full songs. The label people were like, ‘You guys should 10 o’clock synth pop polish this more — he’s a little flat here, and a little off there.’ So then we spent a long time trying to recreate the tracks and get perfect performances, but to ask Beaver ‘Could you make that insane sound again?’ — it was just impossible.”

“I spent eight hours on one word,” Sheppard attests.

“When Beaver’s singing over a track for 20 minutes, there comes a point where he gets into a groove, and it’s really important that he’s not thinking about what he’s doing,” Whitten explains. “But when he’s goin’ like a chicken on acid, things start flowing out of him and it just flourishes. That excitement about what we’re building in that moment, you can hear that on the new record.”

Cell Phone 1 is the NEW, new record, a middle-ground between the relatively guitar-heavy Failure and the ravin’ vibe of the shelved Techno Prisoners record.

“We just ended up making songs that fit the 10 o’clock settime a little better,” says Sheppard. “There’s nothing worse than playing techno songs at a bar somewhere at 10 o’clock to a bunch of people standing up.”

Given Co/ntry’s need for freshness in the studio, I asked whether playing the same songs again and again on stage presents a challenge. “The key is to not practise at all,” says Sheppard, breaking into a harmony of chuckles with Whitten.

“There’s a different energy every time we play, depending on what happened that day or how fucked up we are,” Whitten says. “Sometimes the best sets have been the ones that were technically the most disgusting and sloppy, but they’ve just been the most fun ’cause the energy and enthusiasm is there.”

“We played this one afterhours show,” Sheppard recalls, “and the integrity was there, but after the show we watched the video and it was just hilarious how off I was playing the guitar. It was still awesome ’cause I didn’t give up and I didn’t even think I was doing anything wrong.

“It’s kind of like that scene in The Wolf of Wall Street when he drives his Lamborghini back from the casino. He thinks it’s in perfect condition but actually it’s completely destroyed.”

“That’s pretty much you to a T,” Whitten says. “You think everything’s fine when it’s really a giant disaster. But your conviction makes it enjoyable.” ■