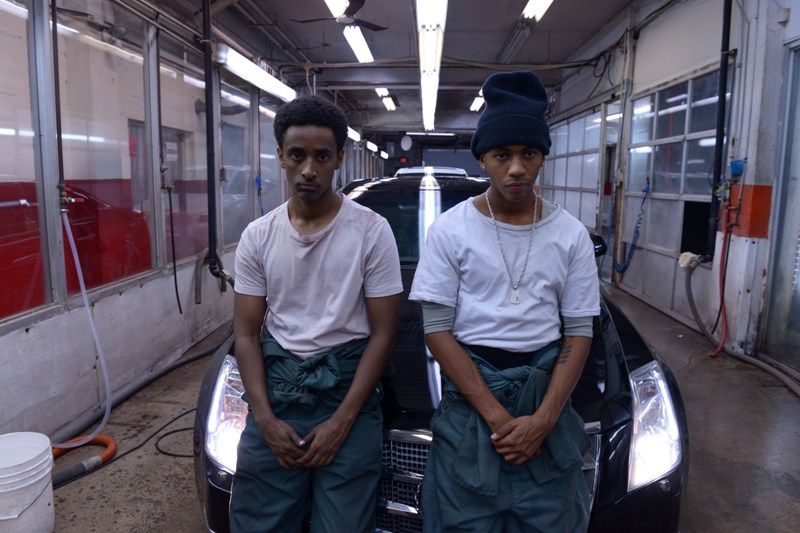 The satirical hipster comedy Who Is KK Downey? (co-directed with Pat Kiely) was the culmination of the work done by the Kidnapper Films crew after dozens of shorts. Since then, Curtis has been more active as a commercial photographer and videographer for outfits like L’Oréal, and his second feature film, Boost, doesn’t have much to do with his previous work.

“After KK there was a door that opened where I was now in the system and able to pitch things to Telefilm and SODEC,” says Curtis. “I developed a few screenplays — some comedies, some dramas — but this was the one that I did on my own. Telefilm had a pilot project where they wanted to produce five lowbudget genre films. I love genre films, so I pitched something.

“I had a friend of mine whose car got stolen,” he continues, “and I discovered that it’s actually an insane epidemic here. Montreal has one of the highest rates of auto theft per capita! I thought it was a cool idea to explore.”

Hakeem (Nabil Rajo) and A-Mac (Jahmil French) are Parc Ex teenagers with very little interest in academic pursuits. Working part-time at Hakeem’s uncle’s car wash, they pick up a little extra dough by casing expensive sports cars that come in for a wash and turning over that information to more seasoned criminals. Eager to get a leg up in the game, they decide to boost a car on their own, leading them down a path that moves directly from instant gratification to potentially life-threatening consequences.

Born and raised in Montreal, Curtis saw an opportunity to turn his camera towards the multicultural city he knew. “I wanted to capture the essence of what it was like in public high school in Montreal, with all these kids speaking different languages. [The film] was originally set in the South Asian community, this really amazing, vibrant community that I’ve never seen portrayed on film. I wanted to tell an immigrant coming-of-age story, to have this kid who’s an outsider in the larger Montreal community, but also doesn’t really know himself.”

Depicting communities you aren’t part of is tricky. Curtis acknowledges that one of his major challenges was doing justice to his characters’ backgrounds. “That was really the M.O. from the beginning,” he says. “We built the whole backstory with a cultural advisor, Manjeet Singh, who runs a local South Asian newspaper. A lot of the immigrant stuff is the shading — it’s not the main focus of the movie — but we wanted to build that world and make it feel believable and realistic. Manjeet was amazing, and he really liked [that the film] felt contemporary. He worked at a child-care service and he said that what they dealt with the most was [the kids] not wanting to have anything to do with tradition and family, and just wanting to very quickly adapt to their surroundings in this Western culture.

“We ended up casting these two amazing guys and applying the immigrant story to Nabil, who plays Hakeem. He was excited when he read the script because there was so much of his life that was similar to the character’s. But we also made the character more like him: he’s from Eritrea, he speaks Tigrinya and he’s Muslim.

“We screened the movie at Concordia for comms students, and there was an Eritrean student who was just freaking out. It’s true that the whole idea of representation means you have to be super careful. It’s a minefield, but at the other end of it, when people see themselves represented, it’s really cool!” ■