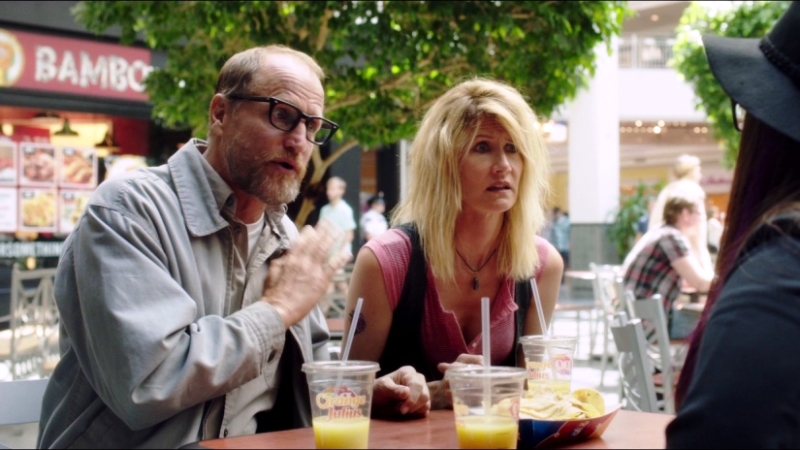 The first few minutes of Wilson are worrisome.

Bouncy indie-movie jazz plays over footage of Woody Harrelson’s character going about his daily routine. Over the soundtrack, a voiceover narration ruminates on modern life and everything that’s wrong with it. It’s such a familiar and overplayed indie trope that it wouldn’t be surprising if someone thought they accidentally walked into a movie they’d already seen. It’s doubly worrisome when you consider that the film is an adaptation of the graphic novel of the same name by Daniel Clowes. Clowes, of course, is the author of Ghost World, which was eventually turned into a film that somehow circumvented said indie tropes while also laying the groundwork for 15 solid years of pleasant-yet-plain quirky slice-of-life Sundance fodder. Clowes represents, in a way, the best possible voice that can be applied to this kind of wry, twee dramedy — but the film that Craig Johnson made out of Wilson does not.

Harrelson plays the titular Wilson, a maladjusted (and seemingly unemployed) misanthrope who lives alone with his dog in a dumpy apartment in Oakland, California. Wilson only has one real friend (Brett Gelman), who immediately announces that he’s moving to St. Louis. A few days later, he learns that his elderly father is on his deathbed. His few positive interactions come in the form of his dogsitter (Judy Greer), a crunchy hippie type who seems to tolerate Wilson’s neurotic ramblings and matter-of-fact oversharing tendencies. An impromptu date with a stranger (Margo Martindale) leads the luddite Wilson to going looking for Pippi (Laura Dern), the ex-wife who up and left him 17 years ago without much explanation. Reconnecting with the troubled Pippi, he learns that she didn’t in fact have an abortion after leaving him as he had presumed, but instead gave the child up for adoption — meaning that the bitter, fatalistic Wilson has a daughter out there in the world.

The reason why the first few minutes of Wilson — uneventful as they are in the grand scope of things — are so important is that they set a tone that the rest of the movie could live without. Wilson is an acidic curmudgeon who’s difficult to love, but the film is set up from the beginning like one of those life-affirming indie films about not judging a book by its cover and piercing the shell of sullen old white men to find the cuddly centre (see St. Vincent and Ashby, to name a couple of recent examples). The bouncy score telegraphs the idea that, one day, you’ll look back at these cringe-inducing interactions and laugh. In other words, it tells us from the first few minutes that it’ll give us what we want and expect, if we stick with it, essentially putting a bow on the whole thing before it even gets started.

Clowes’ original graphic novel had a fairly episodic structure. One of the main advantages of telling a story on the page in any format is how elastic you can make time to suit your storytelling needs. Films aren’t quite as flexible, and both Clowes (who also wrote the screenplay) and Johnson have trouble finding the film’s pace and language in the early going. It’s so episodic in its first act — essentially lining up scene after scene of Wilson’s awkward interactions with various characters — that the character feels more like an abstraction than a fully-realized human, his various interactions serving more to settle Harrelson’s garrulous performance than build an actual character. For about half an hour, Wilson feels more like a combative alien dropped in from outer space than a person who has actually lived in the world he claims to hate so much.

Thankfully, Johnson has gathered an incredible cast that’s more than up to the task of breathing life into this quasi-impossible dilemma. Harrelson is perhaps one of the more underrated actors working today — not in the sense that no one thinks he’s good, but that few seem to recognize exactly how good he is. Harrelson is responsible for bringing most of the best moments in Wilson to life (granted, most of these are also in the graphic novel) by imbuing Wilson with a sort of accidental charisma that develops over the course of the film. In the abstract, Wilson’s episodic nature seems staccato and forced and his lack of a back story makes him feel crudely sketched. In actuality, Harrelson’s performance is nuanced enough to paper over those functional flaws. Dern, too, fleshes out a character that we’ve seen a thousand times before: the self-loathing, self-destructive ageing party girl. Dern and Harrelson are so good that they’d almost make you want to watch a movie where they AREN’T these battered indie-movie stereotypes.

Johnson’s previous film, The Skeleton Twins, was notable not only for being yet another indie movie that casts comedians in relatively serious roles, but also for how raw it allowed them to get, all things considered. While not exactly a remarkable film on the overall landscape, it kind of took me by surprise at the time. Wilson’s pendulum, on the other hand, swings too far in the other direction. It leaves too much space for wacky quotables and sitcom-ish premises and not enough for actual emotions, making its late-in-the-game catharsis ring somewhat hollow. Despite everyone’s best efforts, Wilson winds up being more or less exactly the bouncy, wry Sundance castoff it feels like in its opening minutes. ■