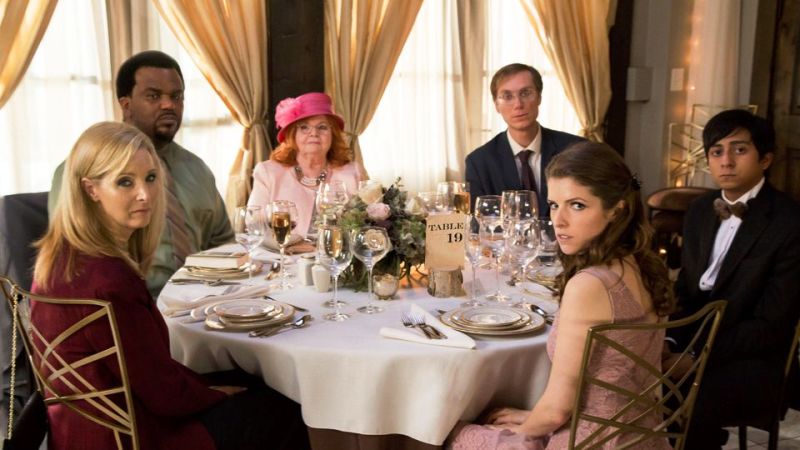 Like the great majority of people, I saw a ton of weddings in movies before I ever attended a wedding myself. They’re ideal movie settings because they’re common enough that most people have dealt with them, yet they’re special enough to never quite become routine. It’s safe to say that my image of what a wedding should be is severely shaped by the movies; on the other hand, no wedding I’ve ever been to has been particularly cinematic (except maybe the one where I fell backwards down a flight of stairs due to unnecessary ambition in the early stages of partying and was escorted home before midnight, but that’d be a real short movie).

Table 19 is peculiar in that it has a somewhat novel concept for a wedding comedy and an execution so rote and lifeless that it completely negates any good idea it has AND severely dampens the likeability of a cast seemingly assembled through a complex system of likeability maximization.

Eloise (Anna Kendrick) half-heartedly accepts an invitation to her former best friend Francie’s wedding. As it turns out, she was unceremoniously dumped by text message by Francie’s brother Teddy (Wyatt Russell), forcing her to divest herself of maid of honour duties. Instead, she’s relegated to the dreaded Table 19, where the undesirables and weirdos who were never expected to accept the invitation are placed. That includes bickering diner-owning couple Bina and Jerry Kepp (Lisa Kudrow and Craig Robinson), Francie’s elderly first-ever nanny (June Squibb), grubby teenager Rezno (Tony Revolori) and socially awkward doof Walter (Stephen Merchant). As the wedding weighs increasingly on Eloise, the weirdos wind up finding common ground.

Table 19 is the rare kind of movie that makes the exact same amount of place for people falling down and giving tearful monologues; trouble is, it doesn’t really work its way to earning either of them. It’s a silly door-slamming farce dressed up in its best indie dramedy outfit, and neither of those parts flow particularly well into each other. Most of the characters are sketched out cursorily and in ways that don’t particularly make sense. Revelori, in particular, gets the shit end of the stick, sheepishly performing the actions of a clueless horndog (his mother, voiced by Margo Martindale, is constantly calling him to give him inappropriate advice on how to get laid) and sees his entrance and exit into nearly every scene punctuated with a pointless pratfall. Much of Table 19 is at the very least recognizably comic, if seldom actually funny.

It’s doubly confounding that the film has a script by the Duplass Brothers and is directed by Jeffrey Blitz, director of the indie hit Rocket Science and TV comedy veteran. There’s a certain touch of the Duplass seriocomic tone here and there, but it’s mishandled and often dampened for the profit of its broader comedic pursuits. It’s obvious from its limited sets, diametrically opposed characters and contained setting that the inspiration comes from good old fashioned farces, if not sitcoms. The problem is that Table 19 is neither funny nor frantic enough to support the kind of shenanigans it periodically engages in, yet it’s too full of dumb shenanigans to make the tearful revelations actually affecting. If this is indeed an old-school theatrical farce, you’re not likely to see it on Broadway any time soon. You’re maybe more likely to catch it between bites of stuffed chicken breast in Terrebonne during summer-stock season.

You could certainly do a lot worse when casting your not-really-funny comedy. Most of the cast aren’t given much to work with, but they make the movie tolerable if not exactly funny. It’s like the seventh time in a row that Kendrick has played this kind of character (most notably in Mr. Right); unsurprisingly, she doesn’t really take it to any new depths but she’s always very likeable. Kudrow and Robinson are the most interesting characters in the thing, if only because their pairing originally seems like such blunt stunt casting that almost anything would be surprising. I’d definitely watch a movie about squabbling diner owners from the Midwest played by those two, but their story (and, consequently, everyone else’s) is treated perfunctorily at best.

Movies like Table 19 rarely get wide theatrical releases these days (assuming they ever would’ve). It feels like an indie-circuit also-ran, a film made on the strength of the pre-sales attained by its cast that nevertheless crashes and burns on the festival circuit and is dumped to streaming where, perhaps, it is rediscovered five or six years later on the strength of its star. (In the DVD era, these movies got retitled and the artwork retooled to look like it had just come out.) It’s hard to get worked up about such a non-entity on the landscape — it’s a film that’s totally easy to tolerate… if that’s your job. Everyone can make much better use of their time.  ■