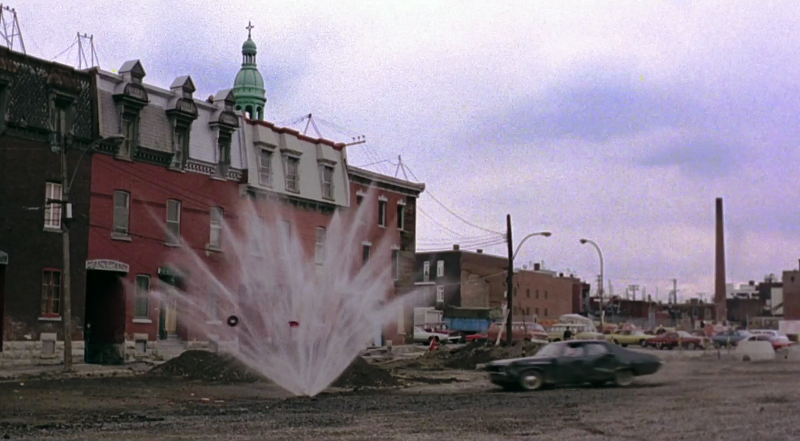 Does Montreal play itself? Hell yes.

Notable local talent: Carole Laure was already fairly well-known at the time, having appeared in a few Gilles Carle movies as well as Dusan Makavejev’s Sweet Movie. Her international presence would be boosted by roles in French hits a few years later, making her one of a handful of viable local exports at the time. Jean LeClerc (who plays Laure’s nefarious ex-boyfriend Fred) would eventually find some measure of success in American television, though he’s pretty stiff in his first-ever role in English. The rest of the cast is also filled with locals, though the absence of any credits beyond an incomplete list of names makes it difficult to connect names and roles. Perhaps the strangest credit of all is Anthony Forrest, who plays Martin Landau’s character’s son — Montrealer Forrest would later play the stormtrooper on the receiving end of the Jedi mind tricks in Star Wars and become a producer for RCA Records in the early ’80s.

Most egregious local landmark: Where do I begin? The very first shot of the film is an overhead helicopter shot of the McGill campus, followed by a scene on its quad, although later campus scenes appear to have been shot at Loyola. A funeral scene happens in Notre-Dame-des-Neiges. Our hero Tony Saitta investigates a perp’s swingin’ pad in Habitat 67, destroying a vinyl copy of Jean-Pierre Ferland’s Soleil in the process. Saitta gets into an accidental scuffle with some undercover cops in Gare Centrale, kicks the shit out of a perp (played by seasoned local stuntman Jérôme Tiberghien) throughout the many levels of Berri-UQAM (Berri-de-Montigny then, as all old people will remind you), meets with a cigar-chomping bookie dwarf at the Percival Molson Stadium and has a kung-fu fight with some transvestite sex workers (1976 cop movies aren’t very woke) on the roof of a swanky penthouse on René-Lévèsque (Dorchester then, as bla bla bla bla). 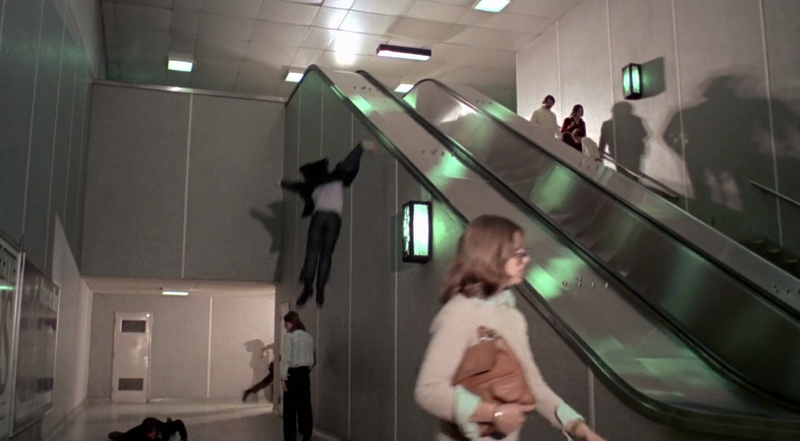 I’ve been wanting to write about Shadows in an Empty Room ever since I first saw it at the defunct Blue Sunshine Psychotronic Film Centre six or seven years ago, but I couldn’t. I couldn’t write about it because it was frustratingly impossible to find for years. Unless you were lucky enough to catch a screening of a 16mm print as I did, it was nearly impossible to see, having apparently never had a home video release of any import. Even the shadowy backroads of questionable legality that film buffs sometimes find themselves in yielded nothing — and even then, that would make the appeal of writing for an audience that could not see what I was writing about fairly limited.

All that has changed, since Kino Lorber released a lovingly restored Blu-ray of the film last year. Home video may be dying as a commercial format, but the work of companies like Kino Lorber has made it possible to see HD copies of movies like this one, even though the actual portion of the population who was actively clamoring for a sparkling transfer of a trashy 40-year-old Italian action movie must’ve been miniscule. Nevertheless, Shadows in an Empty Room (which has also gone by the titles Strange Shadows in an Empty Room and Blazing Magnums over the years) is now easier to find than ever before. 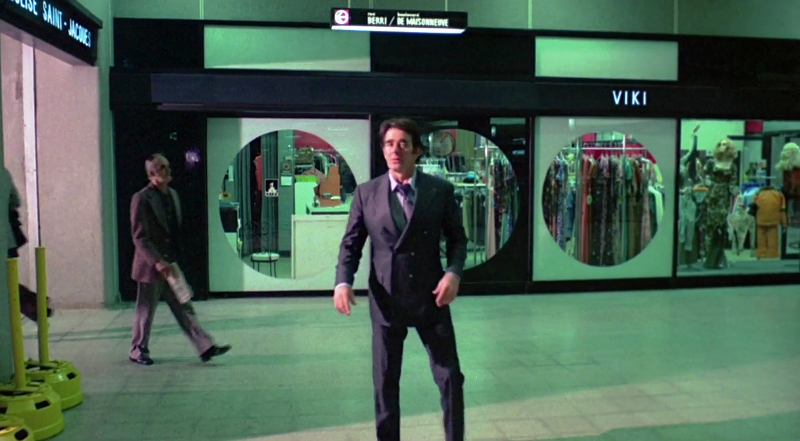 On the surface, Shadows in an Empty Room has a lot in common with poliziotteschi, the brutal, fast-paced Italian wave of police-centric action movies that dominated the country’s commercial output in the ’70s: it has American stars, elements lifted straight from box-office smashes of previous years, elaborate car and foot chase scenes and an overblown, wah-laden score. On the other hand, a lot of this film is atypical of the genre. It’s not particularly political, it dips into horror-based giallo imagery in its third act, all of the actors speak English and — crucially — it was shot and set in Montreal.

Tony Saitta (Stuart Whitman) is a tough Ottawa cop (!) who leans heavily on the shoot-first, talk-later school of philosophy in his work. Too busy gunning down bank robbers to answer a call from his kid sister Louise (Carole Laure), he soon finds himself travelling to Montreal to identify her body. You see, Louise has been poisoned in front of a dozen witnesses, and Saitta and his partner (John Saxon) are intent on finding the scumbag and making him pay. Their suspicions first fall on Dr. Tracer (Martin Landau), Louise’s professor and suspected lover — but pretty much all of Louise’s social circle belongs to some level of the nefarious Montreal underworld, forcing Saitta to crash through trains and jump across metro stations in the name of justice.

Narratively, Shadows in an Empty Room is pretty much a wash. The actual whodunit aspect of the film is handled clumsily and without much suspense. Saitta is in the tradition of almost psychically intuitive movie cops that have far-fetched hunches that always pay off, and the film kind of bounces around from set piece to set piece without much cohesion. Its forced cross-genre elements (Louise’s roommate, played by Tisa Farrow, is blind, meaning the film dips into Wait Until Dark-inspired shenanigans throughout) are fairly awkward and the expository dialogue scenes are leaden (Saxon seems particularly eager to retreat to craft services throughout). If we were looking at the pure narrative value of Shadows in an Empty Room, it would barely be worth writing about. 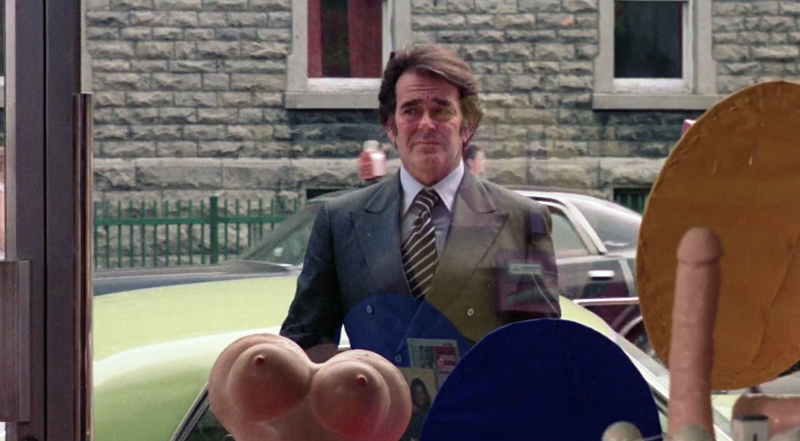 The reason why Shadows in an Empty Room has survived all this time is simpler: the action. It’s considerably less brutal than many of the best poliziotteschi, but it makes up for it with scrappy, go-for-broke action scenes that include what Quentin Tarantino considers the best car chase scene of all time. I’d be inclined to agree — the chase (which eats up nearly 10 minutes of screen time from top to bottom) has a scrappy immediacy that’s lacking from the majority of more polished studio products at the time. It forgoes a score entirely, focusing on screeching and motors revving, and plays out in long takes that favour crunchy destruction over speed and skill. You get the feeling pretty early on that director Albert de Martino wasn’t generous with the takes; in fact, it seems like any and all mistakes and fuck-ups were simply folded  into the jagged metal canvas of the chase scene.

Another part of what makes Shadows in an Empty Room so appealing is impossible to not approach as a cliché: Montreal does a real bang-up job of playing itself. Few movies from the era capture quite as much of Montreal’s shaggy brown glory; the car chase scene itself takes us through countless muddy parking lots and empty fields that have since become condo towers, superhospitals and the cliff behind the Rose Bowl. The strangest sequence of the car chase (which begins in Chinatown and putters around the Quartier des spectacles for a while) happens when the two cars turn a corner down a residential street, only to be met with the gaping chasm of a construction site. 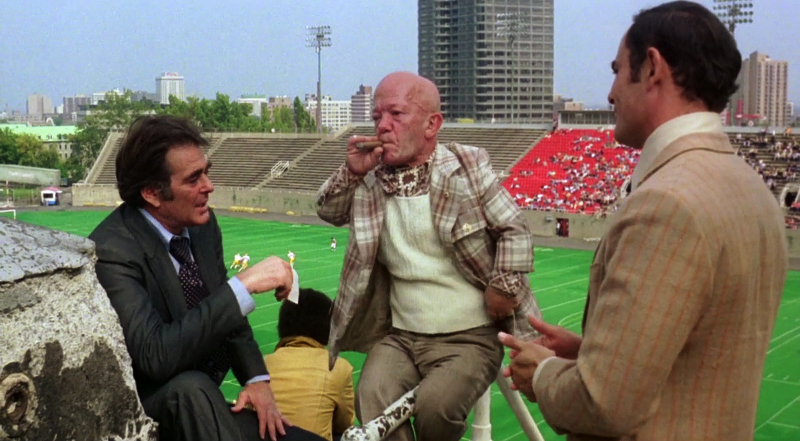 Since most movies shot in Montreal in the ’70s don’t have nearly as many locations, it’s also interesting to see Shadows in an Empty Room as a semi-accidental time capsule. Some locations have barely changed at all — the McGill quad is a little leafier now, perhaps, but Berri metro looks disturbingly unchanged — while others are virtually unrecognizable. Part of the film takes place in an Old Montreal that never wore its moniker more accurately: muddy, empty lots and half-excavated ruins that don’t look like they’ll ever house a place where you’ll shell out $26 for a dollop of steak tartare. Even a non-Montrealer could definitely get with this film’s greasy, mud-spattered vibes.

Like nearly all of the action movies produced in Italy in this time period, Shadows in an Empty Room is undeniably entertaining. For all of its narrative flaws, it moves along at a snappy pace and balances its more ridiculous impulses with a street-level grit that’s undeniably effective. (The credits only list one singular stuntman — if this is truly the case, name a street after this guy.) I think the overall appreciation of the film with connaisseurs of the genre is that it’s a highly inessential film of the canon, but I’d argue the opposite. With its smoothed-over genre elements and overtly Americanized setting, Shadows in an Empty Room has a “baby’s first poliziotteschi” vibe that’s not to be fucked with. For all its flaws, it has an entrancing power that makes me think there’s never a bad time to revisit it. Besides, you’re not going to get too many chances to see a barely-holding-together flip over on the very same highway where you might find yourself in a traffic jam later that day. ■