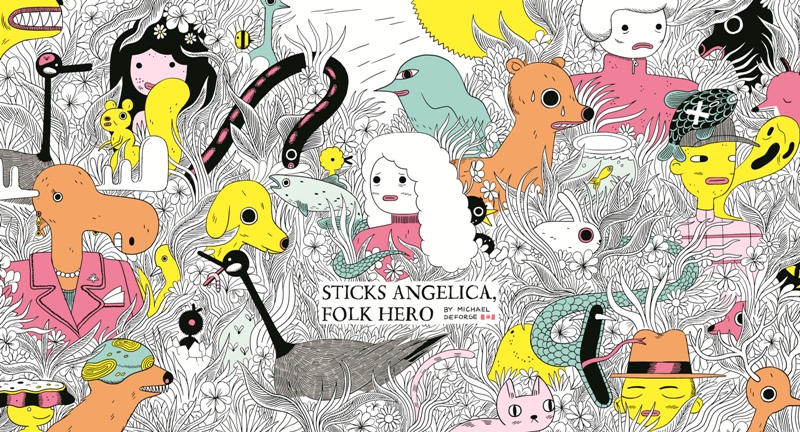 It’s not often that we are drawn into a story where the main character is truly unlikeable. Sticks Angelica is that kind of person: conceited and arrogant yet handsome and admirable. Seeking to remove herself from a diplomatic past, she relocates to some corner of the Canadian Shield, where her personality emerges as a bizarro cross between Snow White and Kim Jong Un.

While tensions run high in the forest under her emotionally benevolent dictatorship, her voluntary exile is thwarted by asshole geese, snakes and a nosey reporter, Michael DeForge. But Sticks’ tenacity is undeniable, and she buries DeForge up to his neck in dirt.

Real-life Michael DeForge is much more reasonable. At the vanguard of Canadian illustrators, the Ottawa-born Toronto resident is a designer on the animated TV series Adventure Time, and his comic series, LOSE, has been nominated for (or won) every major comics award, including the Eisner.

Natalia Yanchak: Sticks Angelica, Folk Hero is, oddly, a patriotic ode to Canada. Did the country’s 150th birthday play into your writing at all?

Michael DeForge: No, I finished the book a year ago, but it just happened to time out that way. Completely unintentional.

NY: Why the emphasis on Canada?

MD: I write a lot of stories that I think of as taking place inside an alternate-universe Canada. They’re my “weird Canada” series. In each of them, I like focusing on one specific aspect of Canadian identity. In Sticks, I wanted to write about our relationship to the idea of wilderness. 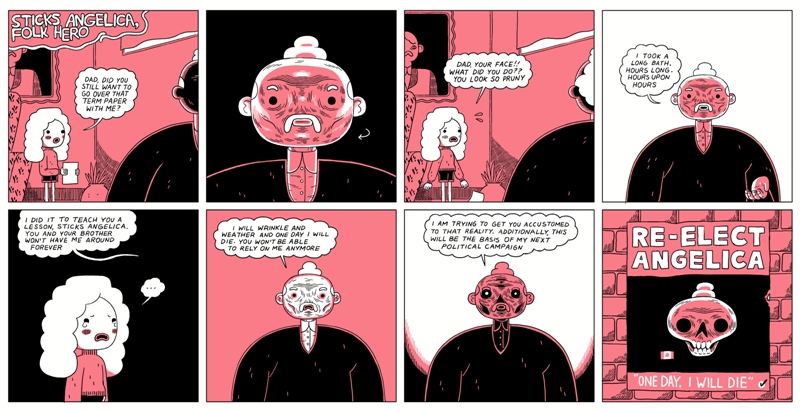 NY: The self-deprecating depiction of yourself, the author, as a character in the book is so meta. What inspired this?

MD: I needed another outsider to come to the forest that Sticks wouldn’t be able to stand, which is why I started writing that journalist character. As I was writing him, I figured it’d kind of make sense if it was just a cartoon version of me. I’ve written myself into comics before. I’m easy to draw.

NY: Like Sticks Angelica, your Instagram comic Leaving Richard’s Valley incorporates common themes of idolization, unrequited love and admiration. Yet as a purported “folk hero,” Sticks Angelica is kind of a jerk. Are we supposed to like her, or like our idols, and our leaders?

MD: Readers don’t have to like Sticks. She’s a jerk sometimes, but I can’t imagine writing a character who is 100 per cent sympathetic and likeable all the time. Sticks clearly has an image of herself that’s in conflict with the image she presents to the world (and to her friends), and a lot of the comic is about how hard those things are to negotiate.

NY: Are your comics political in this way?

MD: I don’t know if my comics are political, but I think anyone reading them would get a pretty clear idea of what my worldview is. It’d be impossible for that to not work its way into the stories.

NY: Do you like working on Adventure Time? Is that ongoing, or over?

MD: As I’m [doing] this interview, I’m on my final week of the show. I love it. It’s the best job I’ve ever had, and I’ll miss working on it when it’s gone. I’m very grateful that I’ve been able to be a part of it.

NY: Tell me about your process: how many hours a day do you write or draw?

NY: What comes first, the image or the story?

MD: It’s been different for each comic. The images or ideas I start with are always vague, though. They’re very loose, sketchy things to start with. I never begin with much of an outline or skeleton.

NY: What can we expect at your upcoming Montreal launch?

MD: Hopefully, they’ll have drinks there. ■