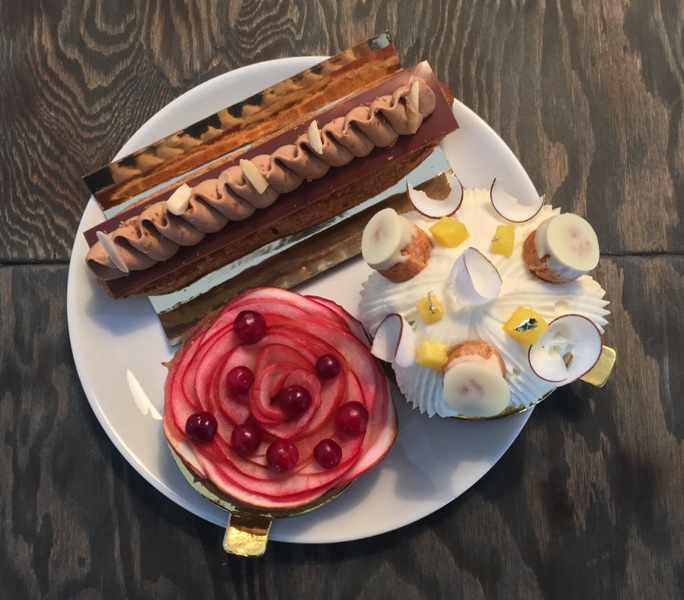 There’s a lot to be said for the traditional culinary-school route, but there’s just as much for those who make their own path by seeking out learning experiences.

Nick Kemball is one of these self-made chefs, having spent fewer hours in institutions than he did under the wings of Roland del Monte of Europea and Normand Laprise of Toqué, not to mention an internship at the Michelin-studded Eleven Madison Park in New York.

Libertine Bakehouse, which opened on St-Henri’s side of Atwater last December, is a sum of the British-born Montrealer’s experiences and we wanted him to tell us all about it.

J.P. Karwacki: How was the shop today?

Nick Kemball: It was great. We’ve got to know the community of St-Henri and people have been really excited about it. It’s honestly been one of the best parts of Libertine. I think people are happy to have a little pastry shop where they can have fun, be loud and laugh, and our alternative pastry seems to be going down really well with the neighbourhood.

JP: Tell me a little bit about how you became a pastry chef.

NK: I credit Montreal with making me want to become a chef, because it was while I was studying linguistics and psychology that I started to really cook for myself. I discovered the Jean-Talon Market, and treated myself to meals I probably couldn’t afford at the time, but I fell in love with food and Montreal’s restaurant scene, and had a thought in the last year of my degree: Maybe cooking’s for me. So I never went to culinary school and started as a savoury cook, just learning on the job.

At one point I got into pastry, which was really exciting. It was intimidating, technical, rule-ridden and I loved it. I’ve never looked back, really. What I ended up with was one of the most educational experiences money can buy. I learned under some fantastic chefs (who all) had an influence on my developing a signature style. I guess I don’t really follow the rules because they were never formally taught to me.

JP: On that note, you mentioned in a past interview that you want to “break the rules a little bit.” Could you explain that?

NK: Right. In pastry, there’s very little room for error, so it’s easy to fall into a pattern of using the same old techniques and flavour combos that are safe. (By contrast), next week we’re serving a mille-feuille, and it’s all there — the pastry is on the inside, but the outside looks like a sea urchin.

A pastry experience is about discovery — it’s exciting and invigorating, and that’s what we’re going for. We feel we made a good choice in coming to St-Henri because it’s a very youthful, open-minded clientele.

JP: Out of the places you’ve worked at, which do you think provided you with the most influence?

NK: I can relate what we’re doing now at Libertine to my experience at Grumman 78, where I was their first pastry chef. It’s a taco restaurant, but there’s a lot of SouthWestern and Asian influences in their cooking. We launched a dessert cart instead of a menu, and the idea was to provide customers with a plethora of unusual desserts, and a visual spectacle — I rarely made the same thing twice. They gave me a lot of creative freedom, something we do at Libertine. For example, we have a Paris Brest but we wanted a salty/sweet dimension to it so we added miso paste, which may seem like an unusual combo but it really works.

JP: Where do you see pastry going these days?

NK: Sugar has been dialed down a lot, and that’s a positive change — it’s something I’m definitely jumping on the bandwagon with. I don’t like desserts that are overly sweet, and the dominant flavour in pastry should never be sugar. One of our financiers uses raspberry, which we freeze-dry, ground into a powder and dust the surface with. It has the same visual effect as frosting, but it’s tart and really cuts the sweetness of the financier nicely. It’s a good example of how (Libertine) is trying to make beautiful pastries without overdosing on sugar. ■