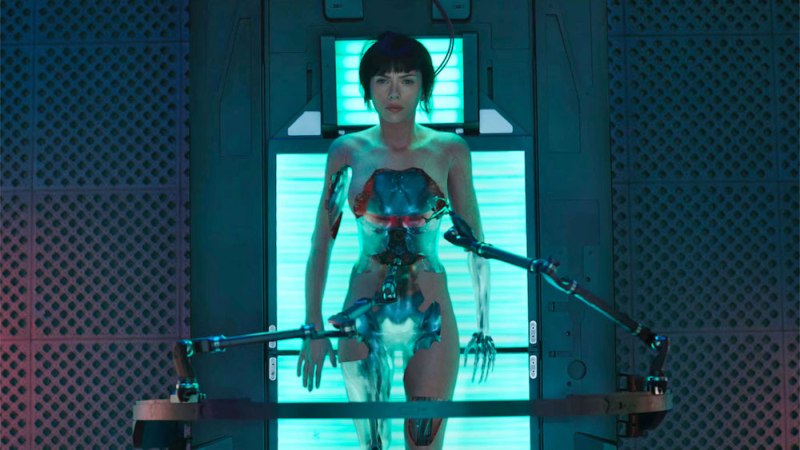 Scarlett Johansson in Ghost in the Shell

I grew up thinking I was a nerd, but looking back, I’m not sure what I was up to. None of the things I liked as a kid have been resurrected, apparently — or perhaps I simply don’t remember them enough to care. For an indoor kid, I sure don’t have a lot of indoor kid references, which makes me particularly ill-equipped to deal with something like Ghost in the Shell.

Fans of the manga series and the original anime feature will likely bristle at the thought that I came into this blind. It’s easy as a fan of anything to be perplexed when others review something you love intimately and come out unfazed. That having been said, if this recent adaptation of Ghost in the Shell actually delivers on your expectations, you may have some soul-searching to do.

I’m pretty sure that I get it, really. I don’t think you need a degree in Ghost in the Shell to appreciate a movie by the guy who made Snow White and the Huntsman. In fact, you shouldn’t. The whole fucking reason they made this movie is because they want to tell this story to people who don’t know it — I assume. That’s, perhaps, a rose-coloured way to look at the process of remaking a movie into something as dull as this. I can’t tell you why Ghost in the Shell blows compared with the anime or give you a point by point comparison, but I can definitely tell you that I had a bad time.

Major (Scarlett Johansson) represents a major achievement of humankind: she is the first person to have a human mind (a ghost, if you will) inside a synthetic body (a shell, if you will). With enhancements that essentially make her an ambulatory weapon, she’s the perfect choice to lead a super-specialized platoon of crimefighters led by the shadowy Aramaki (Takeshi Kitano). When her attempt at hacking into the thoughts of a destroyed robot backfire, Major discovers that the origin story she’s been given is all a lie. She wasn’t a migrant saved from drowning by technology, and now some people with pretty nefarious intentions are going to make sure she won’t be able to hinder crime any longer.

There’s, of course, a kernel of a brilliant idea in here. Perhaps one of the greatest ironies of the original storytelling formats (manga and anime) was that they took a story that was essentially about humanity and told it using no humans at all. The humans are probably the worst thing about this misbegotten adaptation of Ghost in the Shell, and it’s not their fault. Johansson has to be deliberately blank and emotionless to portray the character — who is not only essentially an android in the physical space, but also coming into the realization of what being an android entails — and she exists in a slick, vapid and poorly established universe.

Major simply isn’t a relatable or interesting character in the way the film presents her, and her robotic enhancements aren’t particularly well-laid out, either. One would assume that the subtext is that this character designed to be a cipher is fighting actively against being a cipher. Instead, you have a kind of vaguely defined protagonist going through some motions. This would be fine if the film didn’t have some more lofty philosophical goals in mind than “the police robot hates bad guys.” The more humanity the film requires from its central character, the more it flounders uselessly around a problem of its own making. Ghost in the Shell feels more like a videogame cutscene than cinema — it’s functional, but it doesn’t feel like you should particularly be paying attention to it.

Sanders and his team have done a good job at creating the visual world of Ghost in the Shell. It’s ostensibly set in Japan — though it seems to suggest that the entire post-capitalist world has essentially become Japan — and its rainy, semi-post-apocalyptic futuristic landscapes are lots of fun to look at, but they unfortunately comprise a disappointingly small percentage of the film. So much of it happens in the slick glass buildings and grey corridors favoured by these types of low-enthusiasm studio mishaps. Even the action is intensely disposable, almost like an afterthought in which Major springs into kung-fu, bone-breaking action for roughly eight seconds before running into another glass-panelled room to have Juliette Binoche spit extraneous exposition at her.

Ghost in the Shell opens in theatres on Friday, March 31. Watch the trailer here: