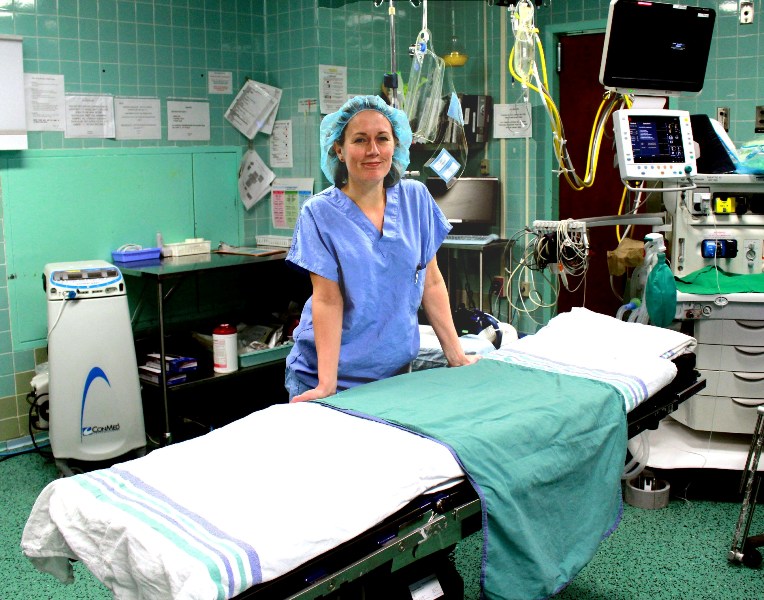 Anna Pevreal, a clinical nurse specialist at the Jewish General

A week ago, I woke up at 2 a.m. to write my column for International Women’s Day. But within an hour, my lips started tingling, my left arm went numb and I soon found myself curled up on my home-office floor, unable to drag myself the tiny distance to my futon. My arm was useless and the rest of my body was barely responding to my brain’s desperate instructions to get off the floor. After 10 minutes or so of flopping around in a self-mocking panic, I was finally able to drag myself onto the futon. Then, after a few more minutes, I lurched like a drunken sailor in a North Atlantic squall to my bedroom on the other side of the weaving apartment.

And went back to sleep.

I got up an hour later and felt fine, just a little dizzy. I was supposed to drive a friend to the airport at 5 a.m., but we agreed I should instead go back to bed. She knew I’d had these dizzy spells before and that they could last all day. As I got back into bed, my downstairs neighbour pounded the ceiling with a broom handle — his way, I guess, of offering his moral support for my struggles. By 9 a.m., I was awake and alert again, but concerned enough to get an emergency appointment at my clinic. Then I went back to bed, but asked my girlfriend Valérie to give me a wake-up call at 2 p.m. to make sure I made it to the clinic.

When she called, I discovered my left arm had gone numb again. As I described my symptoms, she had Googled “stroke” and was checklisting me. I think I got 8 out of 10. “I’m calling an ambulance,” Valérie announced. “Is your apartment door unlocked?” It wasn’t. And I didn’t want the paramedics smashing open the door, so I tried to rock myself upright to get out of bed. It just made me worse. Valérie says that’s when I started stringing random words together in a stutter salad. Yet I somehow managed to get out of bed, put on a pair of sweatpants like a one-armed, one-eyed, 10-legged drunken sailor, and made my way down a flight of stairs to unlock the entrance to my apartment. Then I climbed back up and got back in bed as Valérie kept me talking. A little while later, the paramedics were carrying my stretcher down two flights of stairs, then soon after they were rolling me into emergency at the Jewish General Hospital.

We hadn’t heard  yet that the Republican plans for U.S. healthcare reform could deprive 24 million Americans — the population of 12 Montreals — of health insurance. But I was thinking a lot about the U.S. experience as I lay on a gurney answering questions in front of a large trauma team at the Jewish. “What’s this costing?” I asked myself as this group of total strangers were united by a single concern: keeping me alive and keeping my brain from suffering too much damage from the oxygen deprivation that makes strokes such effective killers and cripplers.

“What day is it?” asked the team leader, a confident, smiling young male doc conducting a small orchestra of doctors, nurses and interns. I looked up as best I could at the team, which was about 80 per cent female. “International Women’s Day,” I answered, to surprised laughs and — I like to think — repressed applause. I’d have applauded the women myself, but I still felt like someone had switched out my left arm for a sack of whale blubber.

The JGH’s critical-care pavilion is state-of-the art, a $429-million project that opened barely three years ago and now welcomes 85,000 patients a year, yet already battles occupancy rates that can exceed 150 per cent. Building planners sought to address critical problems of modern emergency care, including patients left lying in ER corridors and mounting concerns about the human and medical cost of hospital-acquired infections. It is a building designed to help humanize critical healthcare, to merge caring and efficiency into a single organism that might survive future healthcare funding crunches that will likely only get worse.

We like to complain about our system, I thought, but God I was glad that I didn’t live in Trump’s America. Or Obama’s, for that matter. No one asked to see my insurance plan, all they cared about was making me better. When they told me I’d be in hospital for several more days while they conducted expensive tests, I didn’t have to worry about mortgaging my non-existent house to pay for it. All I needed to concern myself with was getting a friend to feed my cats.

It’s so easy these days, as we are flooded with news about hate and rape and war and racism and violence and the needless deaths of desperate refugees, to think that we live in an uncaring world. Yet almost everything surrounding me that day — and in the week since — is a testament to the opposite. When strangers are ill, we will take them in and care for them, spend thousands or even millions of public dollars to ensure them the care and dignity we’d want for our parents, our spouses, our children. The patients could be from the upper echelons of Outremont or the depths of a Côte-des-Neiges cockroach hotel, but we know that their social status will become invisible under the cloak of those irritating, awkward hospital johnny gowns.

We are right to complain about the system’s flaws. We aren’t perfect. But it is important to remember that we’re often a lot better off than we think.

I’m fine, by the way. I was very lucky. The blood clot, which despite its location in a critical brain artery, doesn’t seem to have caused much in the way of permanent damage. They are still trying to figure out how or whether to remove it, but I’m almost back to normal, as I think you can tell by this column.

My piano career is over, sadly. But that’s been the case ever since my parents refused to buy a Baby Grand when I was 12.

The stroke was a huge wake-up call for me, though, and one that I’m writing about because it’s a wake-up call that we all need. And since Valérie likely won’t be calling to help save your life, here are a few warning signs for even tiny strokes like I had, courtesy of the Mayo Clinic:

It can happen at any age, and it can kill or maim in minutes.

Don’t be an idiot like me. If you are having unexplained dizziness, numbness or vision problems, don’t try to shrug it off or sleep it off. It doesn’t take much blood deprivation for brain tissue to die and vital functions to halt. Don’t try to Dr. House yourself — call 911 and let the real doctors figure it out.

I call it the reverse Golden Rule: treat yourself like you’d treat anyone you love.