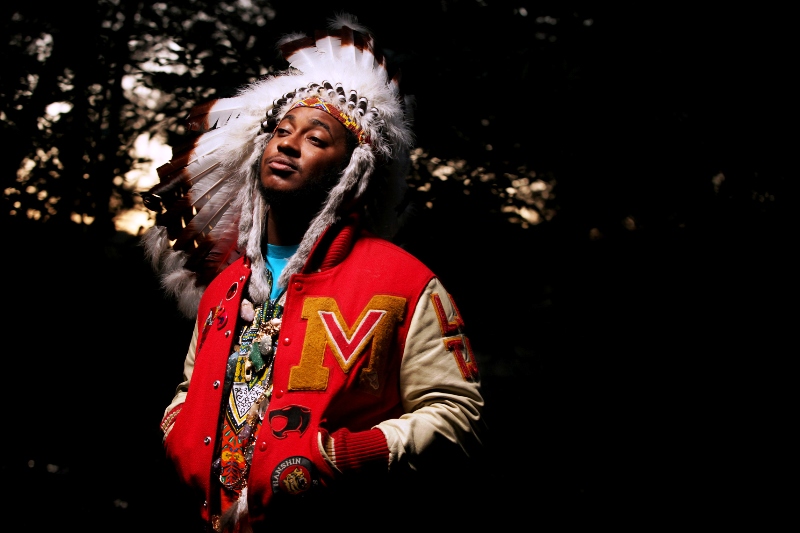 To take a line from the video for Deee-Lite’s “Groove Is in the Heart,” Thundercat has been known to smoke…on stage, that is.

Although his latest album of mostly quick bite tunes is called Drunk, the California bassist and Brainfeeder signee isn’t one to mess bass business with inebriation.

“I’m not into the idea of drinking and playing at all,” he admits. “The album is about real life, it’s not just about trying to be inspired, drunk on my instrument. I take my instrument very, very seriously. There are moments in life where you might end up on stage drunk, but I don’t consciously play my instrument drunk, because I definitely think those things work against each other. You have to watch out for those potholes, those times you feel like superman but you’re more like a street bum.”

Same goes for the studio, although anyone who listens to Drunk will notice how humour and pop culture (e.g. his nom de plume) coalesce with his virtuosity.

“I would imagine that I’m a bit silly, but also very serious,” he explains. “It’s not necessarily a business mentality for me in the studio — although I’d be naïve to think there isn’t a business aspect to it — but I try to keep it as simple as possible. The love of making music is more important to me than the seriousness of it. If business is where it’s going, I’ll go there with it, but more often than not I’m more into just enjoying the experience. At the same time there’s seriousness to the experience, and sometimes you have to get serious.”

On Drunk, Thundercat (who introduced himself by his real name: Stephen Bruner) also wears his influences on his sleeve — even if they might be perceived as a little uncool. We shared a good laugh about Johnny Cage making an appearance in lyric form, especially when Thundercat took time out from our interview to encourage a friend in the room to play a few rounds of Mortal Kombat.

“Mortal Kombat is imbedded in the life,” he jokes.

When asked about his love of video game music, he lets out a humourous: “I love video games, brah.” He says he’d even consider soundtracking a video game, if anyone should call. In terms of influence, video game music can sit alongside his personal pantheon of conventional albums.

“There’s a bit of marriage in the music. It’s like when you listen to a Lil Uzi Vert track and you hear a Super Mario Bros sound — it’s in our culture, and it’s used in a way that’s meant to be more than just a pun or reference. There are melodies that can become driving sounds in the music, and that’s what I would be listening to,” he says.

In addition to gaming, Bruner also turned to his wishlist of favourite songwriters on Drunk’s “Show You the Way,” which includes guest appearances by yacht rock royalty Michael McDonald (from the Doobie Brothers) and Kenny Loggins (of Top Gun “Danger Zone” fame).

Needless to say, working with two of his idols lived up to the hype. But was Thundercat always a fan of two artists one could argue constitute “your parents’ music”?

“How do you think you got here? My parents put that music on and said, ‘We’re going to add a little brother to the family,’” he says.

“The things those guys did for music are so much bigger than the places we try to put them in. It’s a feeling. I’ve been a Kenny Loggins fan since forever. I remember when I first watched Top Gun as a kid and loving the energy of ‘Danger Zone.’ Even back then I wondered, ‘Who wrote this song?’”

Meeting Loggins only solidified his badass status in Bruner’s mind: “He’s definitely a guy who’s lived his life on the highway to the danger zone.”

There is a big difference, Thundercat notes, between liking something genuinely and liking it ironically, comparing it to the difference between laughing at or with someone. And Thundercat was very clear in his regard for McDonald and Loggins, who he says are “songwriting titans.”

That being said, perceiving any vocal similarities between McDonald’s famed falsetto and Thundercat’s occasional attempts are, according to him, a stretch.

“There are moments,” he says. “Everyone’s had that moment in the shower where they’re singing and trying to get their voice like Michael McDonald, and they usually fail miserably. I love fucking Michael McDonald, bro.” ■