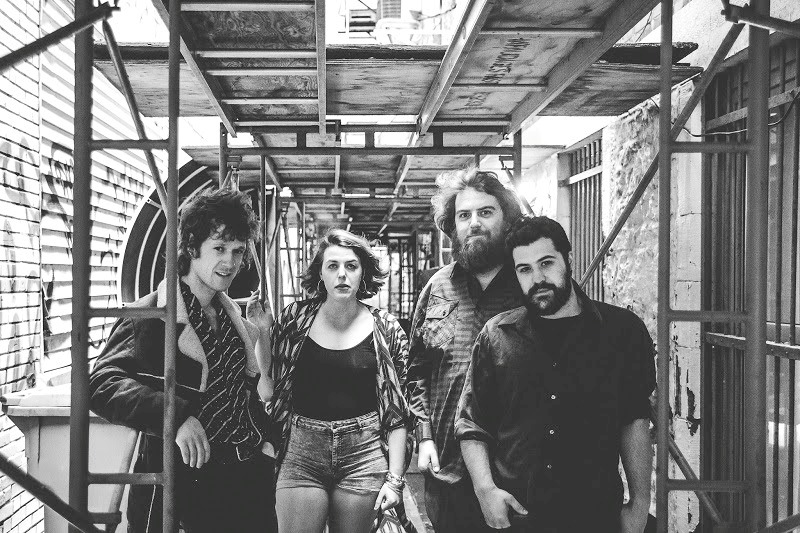 Some bands make a sonic shift when they’re tired of their old songs, but the Great Novel’s sound changed significantly on their upcoming album Skins (out March 3 on Costume Records) due to the departure of a band member.

“We tried a new approach to filling out our sound with something more rock by trading upright bass for electric,” says singer and guitarist Endrick Tremblay. “We switched from roots to the Byrds and Led Zeppelin side of classic rock.”

The change has been quite freeing for the Montreal band, who feel unrestricted by additional instruments. “Not dealing with the banjo and mandolin, we could do what we wanted — it allowed us to dig into different tones, exploring more than before on acoustic music,” says Tremblay. “We’re exploring more than before and we’re less focused on our influence, trying to take songs further.”

The rock direction isn’t foreign to Tremblay who started the project when he was tired of playing other people’s music. “I wanted to make something traditional but new, with my own signature; not too tight but with character. It was supposed to be a solo project, but my skills are limited and we reworked songs so much that we decided to go as a band.”

These days the band is much more of an even partnership. “As the years went by, I was less the leader,” he explains. “Everyone shares their opinion now. Sometimes it’s a struggle, but we find a way that everyone’s happy and the arguments push us.”

While trying to reach this new paradigm, the band found their stride while on assignment, writing the theme for  the TV show Sur les Traces de Kerouac. “It was an honour,” Tremblay says. “I’m really into Kerouac — we’re called the Great Novel since we’re so into words — and they asked us to sing in French. It was still a big challenge to write something in French that sounded cool, but it was everybody jumping in and it helped the creativity of the record.

“Every song in this project starts with the lyrics,” he adds. “I start by trying to write poetry and we turn it into music.”

It should come as no surprise that one of their latest singles, “Get Me Some Land,” was itself inspired by a book, taking Tremblay outside of simply writing about love and relationships, a subject he had grown tired of in the band’s music. “Gabrièle (vocals/percussion) gave me The Apprenticeship of Duddy Kravitz for Christmas. I was really into it, and I wanted to write from the perspective of a character of someone trying to be strong.”

To take the inspired song even further, the band created a visceral video of a brutal bowling alley beat-down, featuring Tremblay battered with a bowling ball and quite literally digging his own grave. “We wanted to experiment with new things with the band, and do things that typical people won’t be able to do. Who gets a chance to be beaten up by their friend for a video?” ■