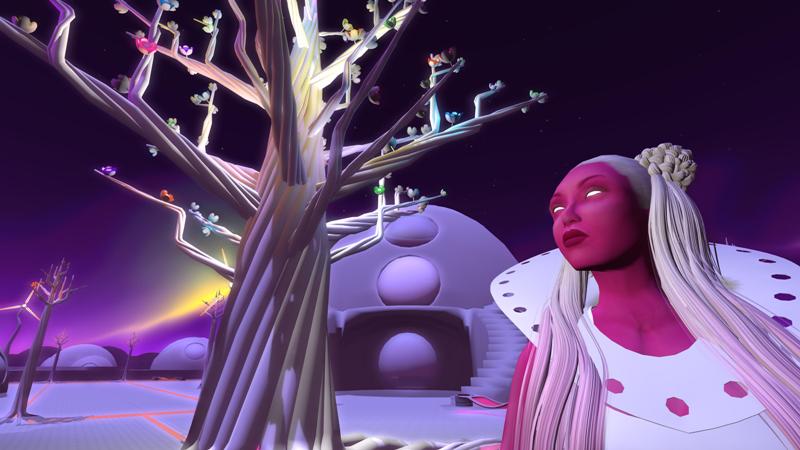 Skawennati is an artist with an eye on the future.

The Montreal-based Mohawk new media artist has been using innovative digital techniques to create engaging new ways to link the past, present and future since her 1990’s art school days, when she first saw the potential of digital graphics as an art form in a Concordia University computer lab.

“I totally fell in love with digital imagery and how we could make these images happen,” Skawennati says. “I would go to Femmes Branchées evenings at Studio XX. They would introduce different new softwares and I was just in love. At that time, people thought of the Internet as this wonderful thing that would bring people together, with the free exchange of knowledge. It was very utopic and everyone was very excited about it.”

These days, Skawennati is well known for her machinimas, which are movies created inside a digital environment. She uses the online world Second Life to house her virtual 3D film sets, character avatars, costumes and other building blocks for creating these movies, including the nine episodes of her TimeTravelerTM project: a narrative series created between 2008 and 2013 that follows a young Mohawk man named Hunter as he visits different points in time from 1490 to 2121.

Skawennati’s newest machinimas include two never-before-seen works that will be on display this month at her solo exhibition at Oboro entitled Tomorrow People. In the first, Skawennati’s avatar welcomes visitors with the age-old Iroquois greeting, Words Before All Else (also known as Greetings for the Natural World, the Thanksgiving Address, or Ohen:ton Karihwatehkwen in Mohawk).

“This is a special, beautiful piece of oration that’s ancient,” Skawennati explains. “It’s said before any gathering in Iroquois tradition. In it, you thank everything in the natural world. I’ve just done the very first verse, which is thanking the people. I wanted it to be the beginning of the show.”

Tomorrow People also features a feminist sci-fi retelling of the Iroquois creation story. “In She Falls for Ages, I’m trying to imagine a post-capitalist and post-race world, and that’s very hard to do! But that’s the beauty of science-fiction: you never have to dismantle what’s there already, you can just imagine what you want it to be and make it.

“We don’t see a lot of images of Native people in the future and I really wanted to see more of that. I started to think of avatars and virtual worlds as metaphors for the future. I want people to see this feminist, Native technology, to see that this is happening.”

In addition to these new media works, the exhibition will also feature physical works including Generations of Play. In the piece, a handmade corn-husk doll and a store-bought Barbie doll, both styled to represent the artist’s Second Life persona, join a 3D printed sculpture of Skawennati’s digital avatar to connect the dots between past, present and future generations and their means of self-representation.

The exhibition marks the beginning of a full year of Oboro programming dedicated to Indigenous artists from across Canada, in conjunction with this year’s commemorations of the 375th anniversary of the founding of Montreal and 150th anniversary of Canada — events for which the dominant characterization as “celebrations” rings a bit hollow for many Indigenous people.

“I’m really thrilled to see so many people questioning the word ‘celebration,’” Skawennati notes. “It’s not just me, it’s not just Oboro. It’s happening across the country. I’m not against white people or European immigrants — that’s my dad, too. They’re all here and they’re going to stay here. But, there wouldn’t be a number 375 if Indigenous people weren’t here to help those settlers, those colonists to live in this environment. My feeling on it is sort of ‘375 plus.’

“I think 2017 is going to be a year of living Indigenously. I’m very interested and very happy to see it happening and hoping that it has lasting effects.” ■