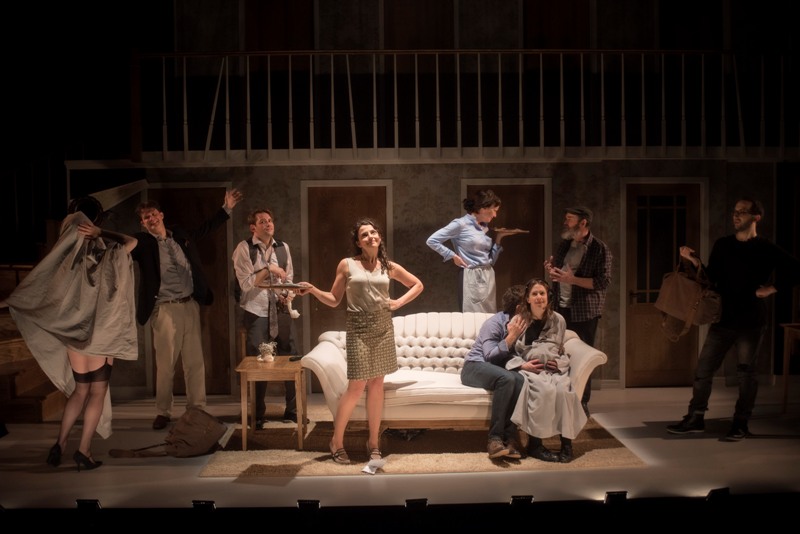 The cast of Noises Off. Photo by Andrée Lanthier

Is the best part of a show what you, the audience, doesn’t even get to see?

In 1970, British writer Michael Frayn had that thought while watching one of his comedies from the wings. He resolved to capture that behind-the-scenes goofiness.

A dozen years later, Frayn wrote Noises Off, a meta-farce about a struggling regional theatre troupe. Labelled by some as “the funniest play ever,” the show has gone on to Broadway, picked up awards and become a mainstay for community and professional theatres.

The show within the show is Nothing On, a classic British sex farce about a guy trying to rent out a country home. Director Lloyd Dallas’s ambition rubs up against his questioning and misbehaving actors. (Oh, and he’s banging both an actress and a crew member.)

Tierney, the Montreal actor, writer and director who’s primarily made a name for himself in film and TV (he’s the guy behind The Trotsky and the very funny Letterkenny), returns to the Segal Centre to direct Noises Off, along with much of the cast from his 2015 production, Travesties.

There’s Martha Burns (considered a living Canadian acting legend) as Dotty, an aging TV star looking to make some dough but struggling to remember her lines, and former Montrealer David Julian Hirsch (you saw him in Weeds) as the long-suffering director. Mainstay performers Marcel Jeannin plays the slow but kind Freddy and Andrew Shaver embodies the whiny Garry Lejeune. 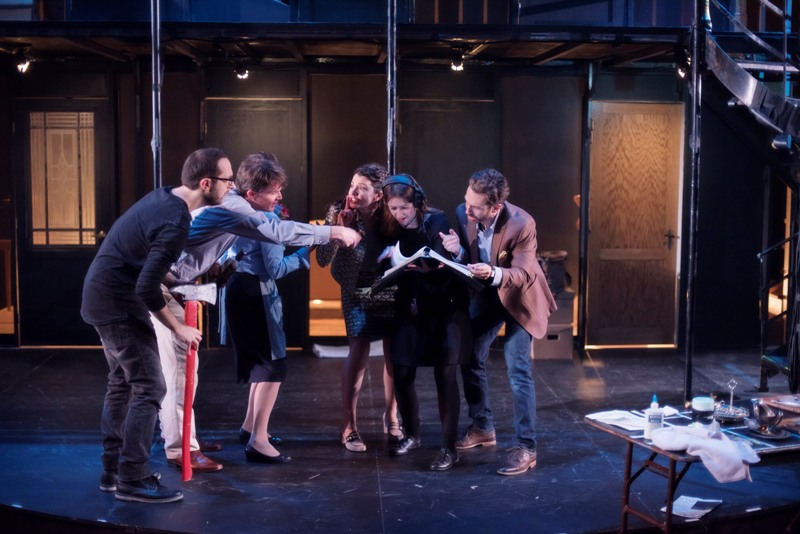 For theatres, Noises Off is an expensive undertaking, with a nine-person cast and a two-storey set with seven doors that get slammed 360 times. Actors trip down the stairs while following a script stuffed with missed cues, double entendres and a gag about sardines. But it’s been put on hundreds of times in the last 35 years. Why do Noises Off?

“It’s not because people are obsessed with (the world of) theatre, it’s because it’s funny and there’s something about it that satisfies an itch — also actors love it,” Tierney explained to me at a rehearsal last week.

“If one person doesn’t remember to do something, the whole thing is at risk of completely falling apart. But good actors really love that. That’s part of how you get Martha Burns to spend her winter in Montreal getting sardines dumped on her head when she does not have to.”

Burns humbly shrugs off Tierney’s comments: “As I approached a certain age, it was less likely that I would be asked to do something funny and light, so being offered a comedy was just an instant, ‘Yes.’”

Burns is in her late 50s. She estimates that the last farce she was in was at the start of her storied career, at the Shaw Festival. Noises Off, she explains, is a “skill-testing job” that requires stamina, not to mention picking up the pace and structure of a farce — the second half of the show is a highly choreographed comedic dance as the set is turned around to reveal the wigs to the audience.

“There’s no larger message, no politics,” Tierney explains. ‘It works your brain a little bit, but really it just works your stomach. It’s abs day for me, because I laugh.’

In a day where politics is clouding over everything, it’s a warming relief to stick to sardines, sex and slamming doors. ■