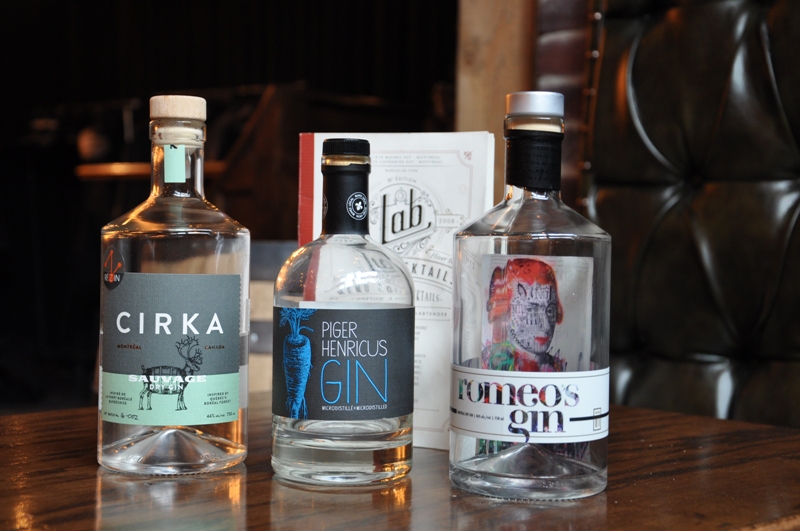 With wine there is this kinda-sorta big thing called “terroir” where the type of dirt, the local weather and many other variables make a wine more special. Over time this has expanded to include a whole bunch of other cultural concepts. Think of the locavore movement, the concept of shopping locally, supporting local cinema etc.

Here in Montreal, we finally have the ability to make 100 per cent Québécois cocktails, and since the province is a rather large place, we can also make cocktails with ingredients sourced from places less than 150 kilometres away with judicious use of products from Ontario (if you want to keep it all Canadian), New York and Vermont.

I start with gin, because it’s a very versatile base liquor for a very wide variety of cocktails. For what it’s worth, the SAQ stocks about 110 different gins currently. There are three different ways to make gin. The easiest is to take Grain Neutral Spirit, aka GNS (here in Quebec known as Global 94 per cent Alcool) dump in a bunch of herbs and spices (don’t forget the juniper berries) wait a couple hours to weeks, depending on your preferences, filter out the chunky bits and then add water until it’s at the strength you like. If you do not see the word “distilled” on the bottle, it is most likely made this way.

The second way to make gin is to do the same thing, but instead of filtering, you re-distill the GNS to get rid of the chunky bits and then add water.

The third way to make gin is to start with some spirit that is not GNS, place your herbs and spices in a basket inside the still and re-distill. This method, if done precisely, does not require the addition of water to dilute the alcohol.

Then to further complicate matters, there are multiple styles of gin. London Dry, Plymouth, Genever, Navy Strength, Old Tom, Sloe Gin, Borovička and many others. The best way to discover what type of gin you like best is by tasting as many different types as possible. Blind tastings are even better as you will not be influenced by packaging, price or any other preconceptions.

(For the record, Canadian law states that gin can be distilled or blended using juniper berries and contain colouring, sweeteners and other additives. It’s a fairly broad description.)

If you peruse the SAQ’s website, you’ll come across 17 gins that could be considered local, Québécois or Canadian, depending on what your definition is. In alphabetical order they are:

Local in name only. Reading the fine print on the back of the bottle reveals that they are made in Vernon, B.C. Slightly more than 4,000 km from Montreal. To their credit they’re using locally grown B.C. grains, and are not buying their GNS from someone else. Matante is somewhat floral and light, while Mononcle is a little bit more forceful and robust.

Proudly Canadian, but in this case almost 6,000 kilometres away — Whitehorse to be specific. As they proudly state, their gin is “gold-filtered.” Anybody using some kind of gimmick like that causes me to keep my money in my pocket. I have no idea what it tastes like, nor any interest in trying it.

A lumberjack gin (gin forestier in the original French) made in Louiseville, Quebec (110 km from here, on the north shore of the river just short of Trois Rivières). This would qualify as local, although they make no mention of distilling or where any of the plants (black spruce, cedar, maple and oak) that they use are grown. It is an interesting gin unlike any other that I have tasted.

About as local as you can get. The distillery is in Cote-St-Paul right across the Lachine Canal from the McAuslan Brewery. They use corn from Quebec to make the GNS and more than 30 other Quebecois botanicals. Very light and floral.

This is where things get complicated. The distillery is located in what used to be Goose Village, between Pointe St-Charles and Cité du Havre. It’s currently owned by an American company, Sazerac, having previously being owned by Corby and Pernod Ricard and before that by Meagher’s. The distillery makes a wide variety of spirits under a bunch of different brand names, including a gin that you might have thought was Dutch. The GNS and the botanicals used to blend their gin are most likely sourced from wherever they can get them cheapest.

Proudly made in Beamsville, Ontario (about 600 kilometres from Montreal), this one uses a base spirit made from Niagara grapes (which confuses me, since that would make it a brandy and not a gin). Their selling points are it is unfiltered and has 22 botanicals. An atypical gin, it’s more appropriate for new and contemporary cocktails rather than the classics due to its flavour profile.

Despite the fact that Domaine Neige in Hemmingford is only 65 km from Montreal, their gin is made with GNS from some unnamed multinational. They infuse it with juniper berries, sweet clover, white spruce and lichen, then distill it. It’s diluted down to 43 per cent abv using something called apple water and some ice cider. Again, not a typical gin. Like Dillon’s, it’s more suited to having cocktails created around it than being incorporated into older recipes.

Gordon’s is probably the most typical and generic gin, and holds the title of best-selling gin in the world. If you can’t immediately remember the taste of Gordon’s, you probably shouldn’t be reading this article. Currently owned by Diageo — which, since it’s listed as Canadian by the SAQ and the LCBO — probably means it’s made in Valleyfield, 66 km from Montreal. Although I would guess that the juniper berries, coriander seeds, angelica root, liquorice, orris root, orange and lemon peel are not local. 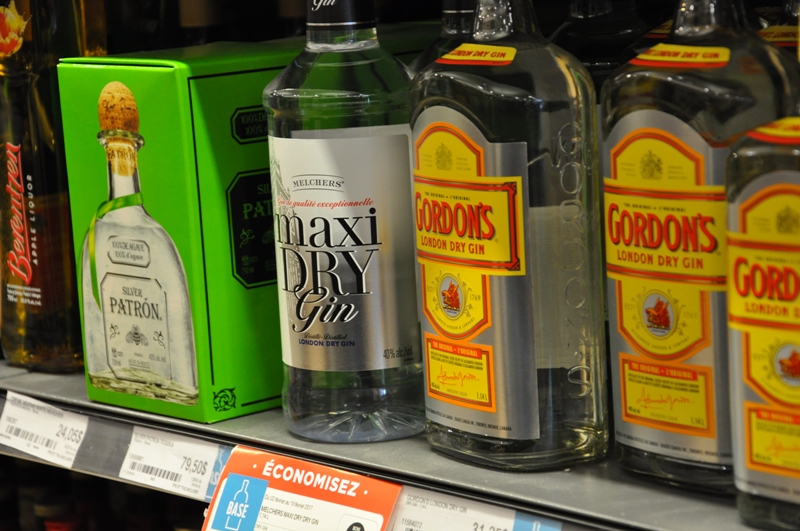 The distillery is located on Bannantyne in Verdun. They don’t offer any information about their botanicals, but since it’s a classic London Dry Gin, using lemon and orange zest (which do not grow too well in Quebec), I would guess that they are sourced elsewhere. But more for their quality than price.

Another multinational conundrum: There used to be a distillery in Berthierville (80 km north east of Montreal, and the hometown of Gilles Villeneuve) that was owned by Melcher’s, a Dutch company with a history dating back to 1837. The SAQ website lists them as the distiller of Maxi Dry, though the Berthierville distillery closed in 1978. Looks like someone is holding onto their permit so as to qualify Maxi Dry as a Canadian gin — Constellation Brands, if I had to guess. This is the cheapest gin that the SAQ sells.

The B.C. crew that makes the Au Pied de Cochon gins also produces their own. Made from an apple-based spirit with some local (to them) botanicals and distilled twice. A little bit thin with not much mouth-feel.

A Piger Henricus is a self-feeding oven that was used for alchemy. Translated from Latin, it means “Slow Henry.” Distilled just outside of St-Jean-sur-Richelieu with local botanicals including their special ingredient — parsnip — it’s a very delicate gin. Not too floral, but not too earthy, it strikes a very nice balance. Currently my favourite gin made in Quebec.

Emphasizing style (their label is by local artist Stikki Peaches) from a company based in Outremont or Mile End, depending on what website you believe. It has all the trappings of being sourced someplace else, although they do claim to use 100 per cent Quebec corn. Similar in taste to Hendrick’s.

Made in Paquetville, New Brunswick (850 km from Montreal) in a Portuguese copper pot still to 80 per cent abv, using juniper, coriander, orange peel, lemon peel, cardamom, cinnamon, Guinea pepper, nutmeg and white-cedar (which gives the gin its name) before adding water from their own well to bring it down to 45 per cent abv. Absolutely delicious, it has a warm, well-rounded mouth-feel that is sensuous and silky. For drinking when the occasion calls for something a little more robust and doesn’t require absolute locality.

Made in Frelighsburg, Quebec (95 km from Montreal, it’s the southern-most place in the province). They spin a tale about one of their botanicals to make consumers think that it’s made in some exotic nordic spot, like Kuujjuaq – close to Quebec’s northern extremity. In fact, Labrador Tea (cloying and sweet, with a piss-yellow colour) grows everywhere in Canada along with about 20 American states, as far south as Pennsylvania. Despite Ungava being local, I’m not a big fan of the made-up story — I hear enough lies in American politics, I don’t need them when I’m drinking cocktails.

Made 4,600 km from Montreal, in Sidney, B.C., in the classic London Dry style using only 10 botanicals. According to their website, the only thing Canadian about their gin is the water.

Cocktails were invented in the 17th century as a way to make alcohol taste better. While I haven’t tasted any, the alcohol made in those days, was probably pretty crappy. Why else would someone add things? The absolute worst gin made today is head, hands and shoulders above what was made 150 years ago. These days cocktails are more of a traditional, cultural ritual than anything else.

One ingredient frequently used in cocktails is bitters. Typically served with an eye dropper or in dashes, they’re high in alcohol content and large in flavour. The only ones that would qualify as local and/or Canadian are the following:

Dillon’s Bitters, 14 different types of bitters depending on what you’re making from the distillers in Beamsville, Ontario.

Ms. Betters is also from Vancouver and has 12 different flavours.

Urban Moonshine Organic Bitters is made in Burlington, Vermont and have six different flavours.

Another integral ingredient in cocktails is vermouth. An aromatized, fortified wine originally made in order to survive trans-continental shipping (adding some brandy stabilizes the wine so it won’t go bad before being opened). There are 22 Canadian ones carried by the SAQ, although the best known are Rouge Gorge and Val Caudalies’s le Lab.

There are also two Canadian absinthes, five eau de vies, six brandies, 57 liqueurs and about 50 Aperitif wines available at the SAQ, all of which can come in handy when making cocktails. 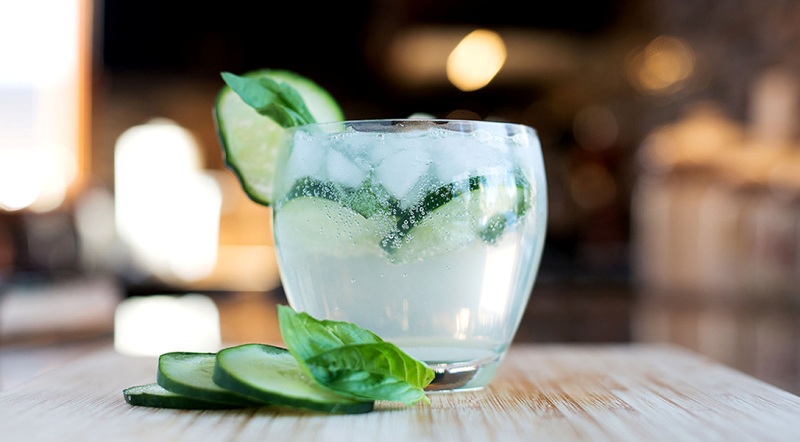 Obviously the easiest local cocktail to make would be a gibson, using your choice of gin and vermouth. A gibson is a martini garnished with a pearl onion instead of an olive — olives don’t grow in Quebec, but onions do. Close behind would be a martinez, an antecedent of the martini with equal parts of gin and vermouth along with some orange liqueur and some bitters.

Here are some other gin-based cocktails that can be made with local and/or Québécois or Canadian ingredients.

Pour all of the ingredients into a mixing glass with ice. Stir and strain into a cocktail glass. Garnish with mint leaves.

Stir all the ingredients over ice, then strain into a cocktail glass. Garnish with a sprig of lemon balm.

Combine ingredients with ice and stir until well-chilled. Strain into a chilled cocktail glass.

Stir gin, grape shrub and simple syrup with ice and strain into a cocktail glass. Top with absinthe.

Combine ingredients with ice and stir until well-chilled. Garnish with a sprig of lemon balm. ■