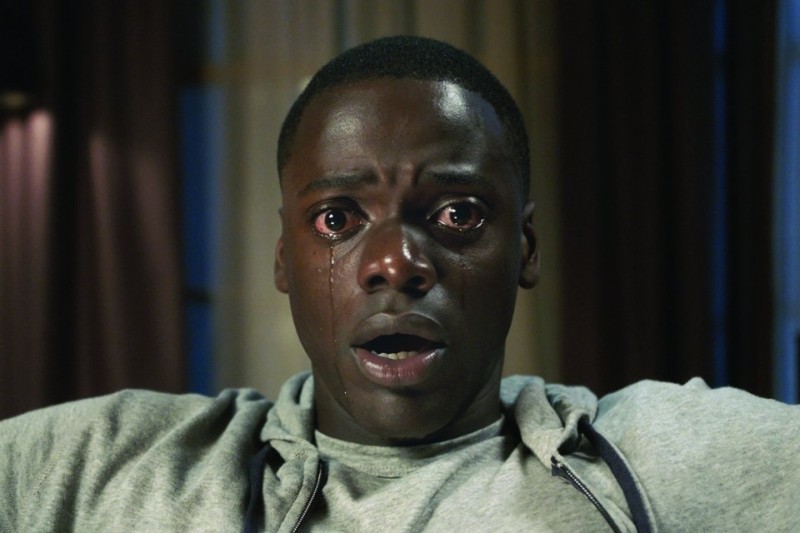 Daniel Kaluuya in Get Out

First things first: Get Out isn’t very scary — not in the traditional sense.

When Jordan Peele announced that his first post-Key & Peele project would be a “straight” horror movie, which he would write and direct but not appear in, there was a lot of insisting that this would be a “serious” horror film. Get Out is serious if you compare it to the sketch show or Keanu, but it’s only really scary in the abstract, in what it says about race relations in America and what our reactions to it as an audience might say about our own perceptions of race. I don’t subscribe to the notion that a good horror movie automatically means a scary horror movie; Get Out is a social satire dressed up in the conventions of classic horror. While it does both well, it’s more scary in the way that the 24-hour news cycle is scary. (When people ask me to recommend a “good” horror movie, they almost certainly mean one that will terrify them with no reservations, which is a completely impossible task that differs greatly based on the involved party.)

When Chris Washington (Daniel Kaluuya) is about to head upstate to meet his girlfriend Rose’s (Alison Williams) parents for the first time, he has to ask: “Do they know I’m black?” Rose assures her that her parents (Bradley Whitford and Catherine Keener) are progressive and cool, if a little awkward. That’s not quite the vibe Chris gets — her father throws every casually racist cliché at him the second they meet, her creepy brother (Caleb Landry Jones) seems overly concerned with Chris’s physical strength and her therapist mother seems determined to use her hypnotism skills on him to stop him from smoking. The family also employs a black groundskeeper and maid who seem completely checked out, smiling beatifically and speaking in clipped platitudes that betray something extremely fishy below the surface.

Get Out is a horror film for post-Obama America, drawing equally on Trayvon Martin and John Carpenter to weave a smart but deeply unsubtle portrait of the black experience. Peele plays with the languages of horror movies and cringe comedy, which are sometimes interchangeable here. The viewer immediately knows that Chris is in a horror movie, but how could he possibly? His interactions are just as awkwardly pat and condescending here as they are every other day.

Peele shows a real knack for creating and diffusing tension throughout, though the film’s more traditional horror instincts are thrown askew somewhat by a parallel subplot involving Chris’s highly excitable friend Rod (played by comedian Lil Rel Howery) leading his own investigation on Chris’s disappearance. Howery is hilarious, but he’s also the element of Get Out that most feels like a Key & Peele sketch and, it seems, the element that takes the film from the purported “straight” horror sphere into something murkier. It’s sillier but — and this is a crucial distinction — much more interesting than a straight cross between Halloween and The Stepford Wives. Most great horror films are about something other than simple pursuit, dismemberment and death, and Get Out draws its themes rather broadly, but in a smart and effective way.

Get Out opens in theatres on Friday, Feb. 25. Watch the trailer here: