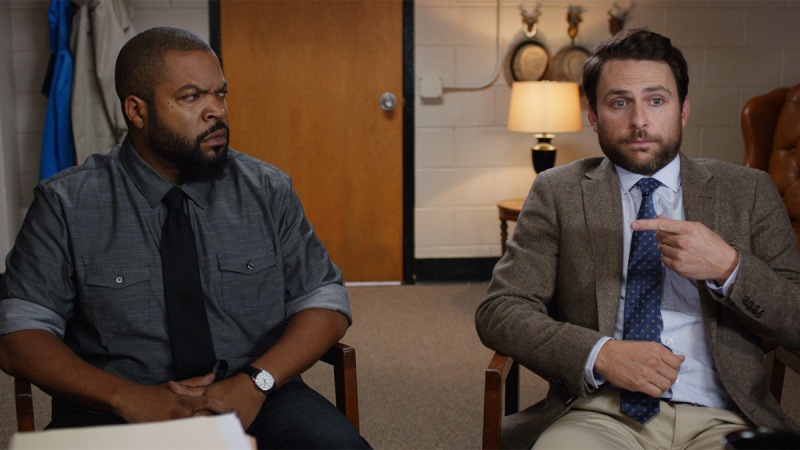 There’s a kind of weird paradox to the very existence of Fist Fight: on one hand, it’s the kind of high-concept comedy that lives or dies on the strength of its leads. On the other hand, it feels like it could’ve costarred any imaginable permutation of tough-guy alpha/comedian beta in the world. That’s not to criticize the work of Charlie Day or Ice Cube; both have done great comedic work in the past, but Fist Fight is such a clean, formatted, predictable comedy script that it’s just as easy to imagine it starring Owen Wilson and Jason Statham, or Jason Sudeikis and the Rock or Will Forte and Liam Neeson… and so on and such forth.

Andy Campbell (Day) is a meek pushover of a high school English teacher whose last day of class coincides with both his daughter’s talent show, the end of his wife’s pregnancy and the school district’s severe restructuring, which could lead to him being out of a job by the end of the day. The students are running hog wild with pranks and the only person they seem to be afraid of is sullen disciplinarian Strickland (Ice Cube), a history (maybe?) teacher who continually threatens students with violence and bodily harm when they get out of line. After a particularly rough incident involving a fire axe and a desk, Campbell somewhat inadvertently throws Strickland under the bus, costing him his job. The perpetually seething Strickland then offers Campbell an ultimatum: at 3 p.m., they’re going to have a fist fight.

It’s not an entirely unfamiliar premise (it’s loosely — very loosely — based on the 1987 high-school comedy Three O’Clock High), but it gets off on the wrong foot by focusing almost entirely on Campbell to the detriment of everyone else. It’s one thing for supporting characters played by Jillian Bell (as the out-of-control guidance counsellor), Kumail Nanjiani (as an ineffectual security guard), Christina Hendricks (as a French teacher who 100 per cent sides with Strickland) and Tracy Morgan (as a resolutely Morgan-like gym teacher) to be sort of one-note and one-joke, but that treatment also extends to Ice Cube’s character.

A monolithic rage machine with a perpetual scowl, his character is considerably less fleshed-out than, say, Guardians of the Galaxy’s Groot, who is a tree-man who can only say one word. This is perhaps what’s most telling about the film’s extremely low ambitions: anyone with a half-decent scowl could easily fit into this role. There is nothing particularly Cube-esque about the character, and nothing that particularly plays to his strengths. No one expects a comedy called Fist Fight to have trenchant insights on human relations, but there’s a base level of characterization that would be nice to have, considering. This is no one’s fault, really — these films are re-written and studio-noted into oblivion, re-tooled and rejiggered to please as wide a swath of audience as possible, even if they’re basically just foul-mouthed sitcoms.

Some of Fist Fight is funny. I’m a sucker for a good pratfall, and it’s got more than a few of those. Nanjiani is always funny, though underused here, and Day’s panic-stricken fluster is often effective enough, but too much of Fist Fight treads ground as familiar as small children rapping explicit lyrics, copious masturbation jokes, an ever-evolving sight gag involving some kids mowing a dick into the football field, Morgan yelling non-sequiturs at top volume, Day being mistaken for a pedophile, and so on. It’s mildly entertaining in the way that most of these mediocre comedies remain watchable even if they’re not really achieving any of their goals, but that’s a pretty low bar to clear.

What initially seems like it will be a refreshingly pared-down concept for a film soon turns into every other studio comedy made in the last 10 years, with Day forced to examine who he is and overcome his own foibles and become a better husband, father and teacher by standing up for himself. It seems disingenuous to me that a movie that literally features a meth-smoking guidance counsellor with predatory tendencies also needs to please whatever quadrant won’t enjoy a film until the lead learns a lesson about being a better person, but maybe that’s why I’m not in the movie business. ■