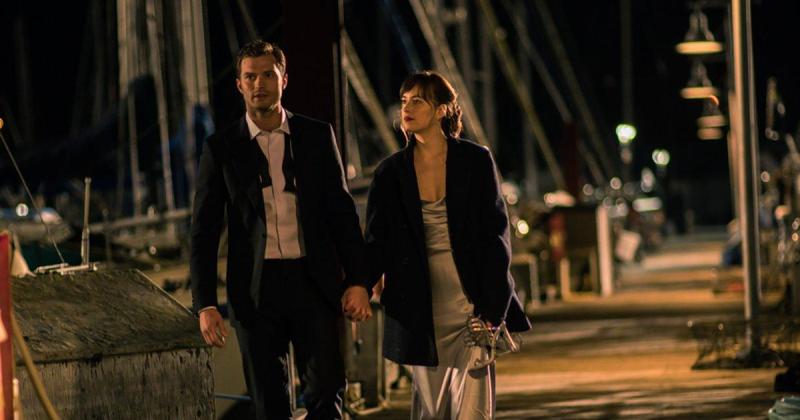 We begin with a ruptured romance, Ana having turned her back on her wealthy beau at the end of the last film due to a dramatic change of heart regarding a sex contract and the potential use of butt plugs. But worry not, dear lovers of love and eternal romantics! Grey swiftly wins her back with the timeless line: “I lost my mother when I was four, because…crack.” He’s not just about anal play, you see — he also has a heart, a sordid past and exciting mommy issues! Add a quinoa salad into the mix and we’re back on track, with Johnson completely naked, back arched, tits out, ass to the wind, while Dornan flexes his pecs and performs that age-old masculine ritual of penetrating with his pants on.

Between sex scenes that vary from mundane to slightly funny, conflicts are thrown in and quickly discarded. Ana stomps her feet and declares her independence, so Christian gives her a nice computer, puts her in a sexy dress and shoves some vaginal beads in her before dinner. An ex-girlfriend shows up with a gun; Christian Jedi-mind tricks her into kneeling and pets her like a dog. The ghost of Kim Basinger hovers in as the older lady “who taught him to fuck;” Ana throws a drink in her face and the ghost of Kim Basinger’s face is physically unable to react.

They have sex on a sailboat, they have sex with metal things, they have sex in his childhood bedroom next to a poster of Chronicles of Riddick, they do it hard or they do it lovingly, but mostly, they do it with the lights off. She puts nipple clamps on her fingers, because she’s just a silly, silly girl and loud, offensive pop music soundtracks every dramatic thrust, every close-up of hands gripping pillows and every second of a scene involving Christian fingering Ana in a crowded elevator, hand rummaging in there like he’s lost his keys. Cue a marriage proposal, fireworks, credits and the void of human existence.

Like everything today, this is absolutely terrible. Fisticuffs fangirl E.L. James’s ill-conceived characters were never meant to be anything more than empty vessels for her sordid and slightly childish fantasies involving giant erections and bumbling inner goddesses.

Dornan fails miserably at the arduous task of breathing life into a serious businessman whose handsome, dead-eyed face seemingly makes up for his possessive stalker tendencies. E.L James clearly just imagined a pretty penis first and then drew the rest in, like his “business” involving buying airlines, sitting in on meetings where people say “investments” a lot and supposedly making $24,000 a minute. Dornan does venture outside of monosyllabic retorts and passive sex faces when he cries while drawing lipstick on his chest to “show his limits.” I don’t mind a possible psychopath either if he gives me a good pumping and draws lipstick on himself.

Meanwhile, Johnson chews her lower lip and sheds single tears to the best of her damsel-in-distress abilities, being passed around from her obsessive male friend to her predatory boss and right back to her creepy, spanky boyfriend. Foley’s directives seemed to have been “look sad,” and “okay, now lean on something and stick your butt out.”

This unlikely, stale romance won’t be the one to sweep you off your feet this Valentine’s Day, but perhaps you’d rather be pinned down and shaken up, or just spend two hours fiddling with yourself to the sound of Taylor Swift in the hopes of some sort of stimulation. It’s 2017, baby — do we really need to be subjected to more filthy rich people wanking each other off?

Hopefully, it will lead to every little lady dining out in the name of love, doing so with beads firmly shoved in, praying for her husband to command her to remove her panties between the chicken Kiev and the pudding chômeur. ■