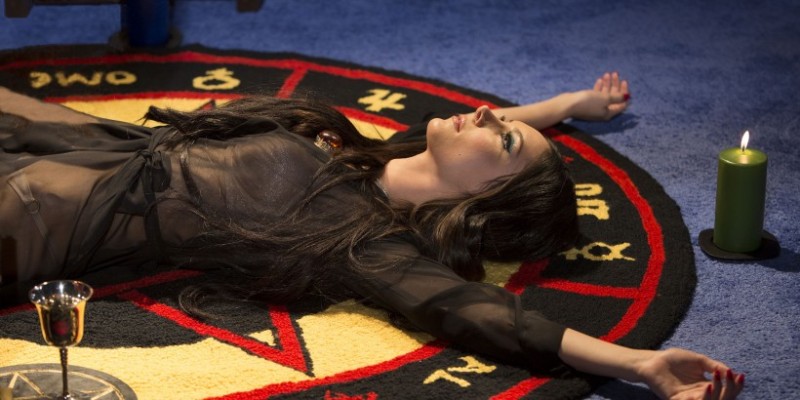 Samantha Robinson in The Love Witch

Cult MTL’s Screen Editor Alex Rose and critic Justine Smith discuss their favourite and least favourite films of 2016. Scroll to the bottom for their Top 10s.

Alex Rose: It’s become hack to say that 2016 was a bad year, and I certainly wouldn’t be the first to say that 2016 was actually a pretty good year for film. The studio/blockbuster output this year wasn’t great – studios are struggling with changing times and throwing all of their money at antiseptic franchises that often don’t deliver, but the foreign and independent output is pretty much as good as it has always been.

In order to discuss our favorites this year, though, we have to make a few concessions. Our criteria is simply for a movie to have played in Montreal in some form or have had a home video release — this includes films that have played festivals but are only making their theatrical debut in 2017 like Toni Erdmann (which I haven’t actually seen).

Case in point: Green Room made a lot of 2016 lists, but it was my top film of 2015, and is therefore ineligible to be discussed here. (It would probably still be first — or maybe second — on my list.)

Justine Smith: It only seems obvious to me that as a society we have collective amnesia for all things older than about six months. Ever since I can remember, it has been chic to declare that the past year was a bad one – or at least disappointing, forgetting that film is far more than the dozens of major blockbusters released by major studios and that the bulk of cinema has always been disposable because in its mediocrity, so much of it is forgettable. 2016 was a great year for film and while in some cases you had to search for it, there were a handful of well-watched films that had decent releases that will and should be remembered for years to come.

While I am somewhat in the minority, The Jungle Book really struck me as a move in the right direction for larger productions, embodying a beautiful mix of technological advancement and simple, effective storytelling. I wouldn’t say it’s Top 10, but I believe it will have staying power.

Moreover, last year was a spectacular one for groundbreaking and critically acclaimed genre films, the kind that are screened at the Fantasia Film Festival, which we are unbelievably lucky to be able to attend. My personal favourite, the Polish were-mermaid musical The Lure, was an absolutely enchanting retelling of The Little Mermaid. Everything about it was refreshingly and shockingly sensual. I’d say the same about Anna Biller’s The Love Witch, which reinvented so many of my favourite films from the 1960s and ’70s with a modern twist. The film is about a modern witch who uses her powers to find ideal love, all within a brightly coloured and highly decorated world — I love that horror is sexy again. Train to Busan was the best zombie film of the past five years, maybe the best theatrical experience of the year. Also from Fantasia, I loved I, Olga’s grey melancholia and chaotic spirit, and I’m still shaking off the creeps from Kiyoshi Kurosawa’s Creepy.

AR: It’s true that genre films tend to fall by the wayside when people are compiling their end-of-year top whatevers. Critics regurgitate the same films in different orders, and the lists mostly serve to drive home particular points about which of the buzzed-about films deserve (or don’t deserve) their hype. I was also a big fan of The Love Witch, but I saw none of your other Fantasia faves, which speaks to another disadvantage that genre films have in these situations: they’re harder to see and often find their audiences later on. Fantasia also stretches the definition of genre films to some degree; some of my favorites from the fest (Tower, Little Sister, In a Valley of Violence) aren’t so specifically coded in genre that they couldn’t also find a place in another festival.

That said, my favourite film of the year is an extremely obvious choice: Kenneth Lonergan’s Manchester by the Sea, which is already being hyped everywhere. I saw the film just before heading to TIFF, thinking that I was about to be blown away by films that would perhaps put my outsized reaction into perspective. I wasn’t. As predictable as it is for a sad white man to jump onto the year’s top-tier sad white man movie, it’s really an incredible film. Barry Jenkins’ Moonlight looms close behind, as does Paul Verhoeven’s provocative Elle and Richard Linklater’s compulsively watchable hangout flick Everybody Wants Some!! (I’m a little disappointed in the conventional white-dudeness of my list at this juncture, though it usually takes at least a year to play festival, foreign and genre catch-up.) 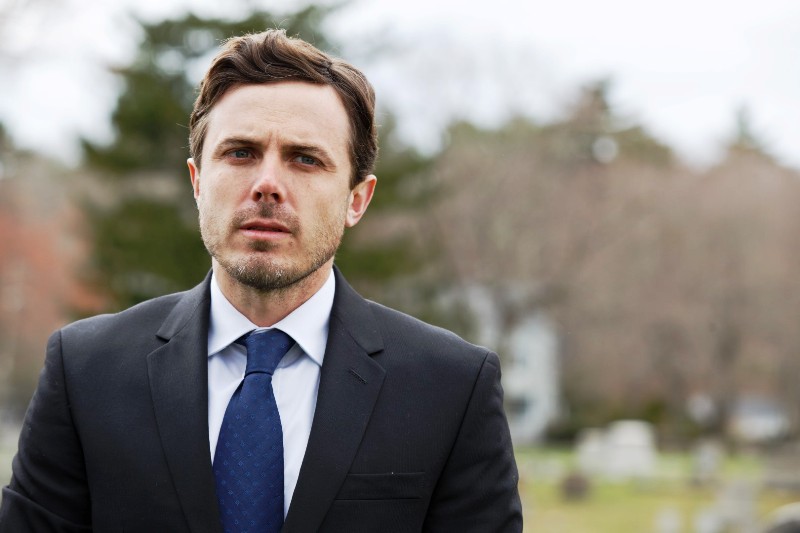 Casey Affleck in Manchester by the Sea

JS: From everything I have seen, Manchester by the Sea is also my favourite of the year. While it has been talked about to death, I still managed to go in quite “cold” and was surprised by the design, narrative and emotional weight of the whole endeavour. It is that kind of film that really waves over you and seems to echo in your thoughts for days and weeks after you watch it. Lonergan, whose previous film Margaret was also one of my favourite films of the past 10 years, has a keen and darkly ironic treatment of death and grief that showcases his talents as both writer and director. The film is difficult to watch partially because he manages to touch on the absurdity of death and the painfully artificial ceremony that surrounds it. It’s also wickedly funny.

I saw a lot of my other top film of the year at festivals, which, in a way, does support the notion that mainstream audiences don’t have the opportunity to see the best movies, making it easier to understand why people think movies are in a funk. The selling point is difficult (since subtitles always are) but I see films like Yourself and Yours by Korean filmmaker Hong Song-Soo as immediately relatable to a wide audience — it’s a clever re-invention of the rom-com but unfortunately I do not see it getting a Montreal release outside of its Festival du nouveau cinéma screening. Same for two of my other favourites from that fest, Scarred Hearts and From the Diary of a Wedding Photographer. Toni Erdmann strikes me as the exception to the rule; I suspect it will actually do quite well, outside of festivals; it might be long, but it’s truly hilarious.

AR: I’m reminded of something that Vincent Biron (director of my favorite Québécois film of the year, Prank) said in our interview: the way we talk about films has a lot to do with how accessible they might sound to the layman. Hong Sang-soo makes movies that are, I think, pretty accessible; what he does is a bit of a Korean extension of the mumblecore genre, but the subtitles and ghettoization of foreign films means most people won’t even be made aware that they might enjoy it unless they’re already fairly steeped in that world. Directors like the Dardennes or Asghar Farhadi make films that are about regular people and about as relatable as anything I can imagine, but their image evokes impenetrable arthouse aloofness.

Part of this “death of cinema” horseshit train many are on is actually decrying the slow disappearance of a very specific kind of middle-brow, accessible drama — the kind that seemingly only Clint Eastwood is allowed to make anymore. In that respect, I really enjoyed Hell or High Water, an “action movie for grown-ups” that would’ve seemed commonplace 20 years ago but feels fresh and original in the samey landscape of franchises and sequels. I have to say that I’m extremely partial to Americana-steeped, denim-shirted crime films (especially if they open with a Townes van Zandt song, as this one does), but this one’s really something else. 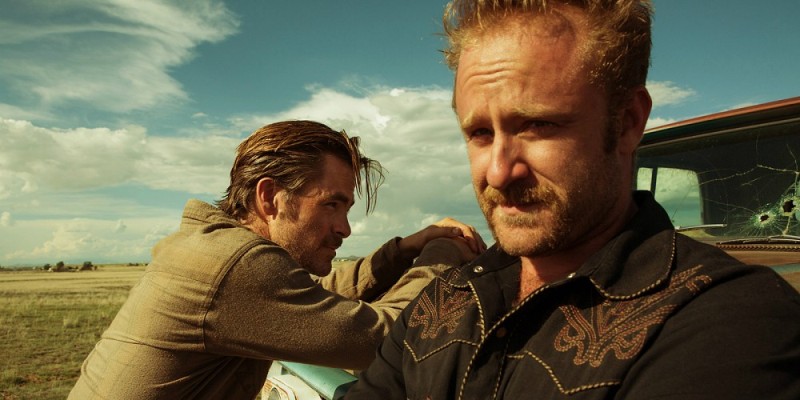 Chris Pine and Ben Foster in Hell or High Water

JS: You are on the money with Clint Eastwood as maybe the only director who consistently gets to work in that middle of the road “adult” movie consistently. HIs 2016 entry was Sully, and while it wouldn’t be at the top of my list, I enjoyed it very much. Audiences in North America are losing out in the slow-death of these “adult” dramas, and I consistently feel producers, distributors and studios misunderstand their appeal. As movies increasingly seem geared towards “all audiences” or “niche” audiences, a large sector of the moviegoing population is consistently left out.

Generally, I don’t take too much pleasure in discussing the worst movies of the year. As a rule the really bad movies I watch are not necessarily deserving of scorn — making movies is hard, and often times people are only given one chance. Shitting on the little guy always seems a bit mean-spirited, and while it may confirm fanboys’ bias against critics, I think it’s only fair to tackle the bloated and epidemic messes that have little respect for their audiences.

Last year I avoided a lot of the films I’d normally review, like most of the DC entries and a lot of the “cheap” kids films. Many of the worst movies I watched were bad comedies like Central Intelligence, which was just very dull. Masterminds, while funnier, was similarly disappointing — I was not surprised it was caught in limbo for a few years. (When talent so obviously outweighs the material, it proves that studios don’t value quality writing and direction as long as they can keep costs low and get butts in the seats.) Otherwise I really hated Moonwalkers, a nonsensical child fantasy that had very little rhyme or reason and absolutely no stakes.

AR: Before I became Cult MTL’s Screen Editor, I was known mostly for being down to review whatever garbage movies other critics didn’t want to review. Now I’m much less drawn to obvious crap, especially when I have conflicting screenings to choose from. The two worst movies I saw this year were definitely London Has Fallen (which was so bad I don’t remember a second of it, not even clearing the very low bar of requirements for a dumb action movie) and Collateral Beauty (which was so bad that I have rattled off its entire plot to several semi-willing parties), films that stand on polar opposites of genre and intent but are both simply painful.

Unsurprisingly, a lot of my least favourite films of the year are part of franchises both ill-defined and faced with diminishing returns. I thought Batman V Superman was infinitely worse than Suicide Squad (which, mind you, isn’t great either), while Zoolander 2 and Bad Santa 2 both show that waiting over a decade for a comedy sequel really devalues the importance of momentum. In terms of sheer disappointments (aka movies that could actually have been good), Kiyoshi Kurosawa’s colossal bore Daguerreotype put me to sleep, Derek Cianfrance’s soapy The Light Between Oceans wasted an incredible cast and Woody Allen put out his second dud in a row with the underwhelming, overplotted Café Society. 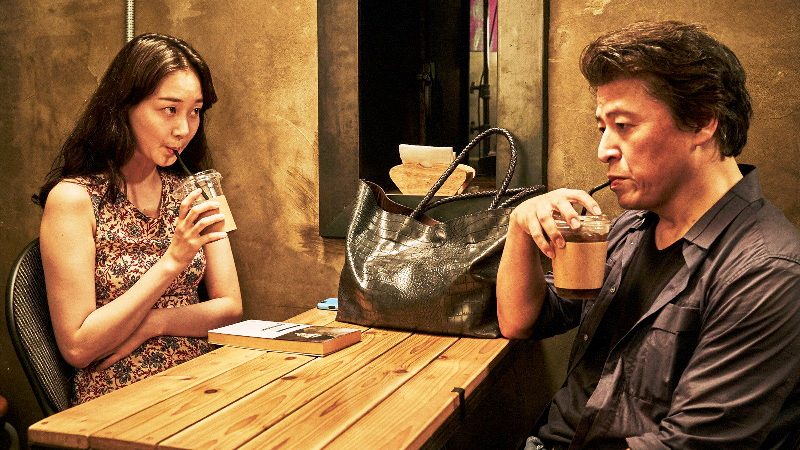