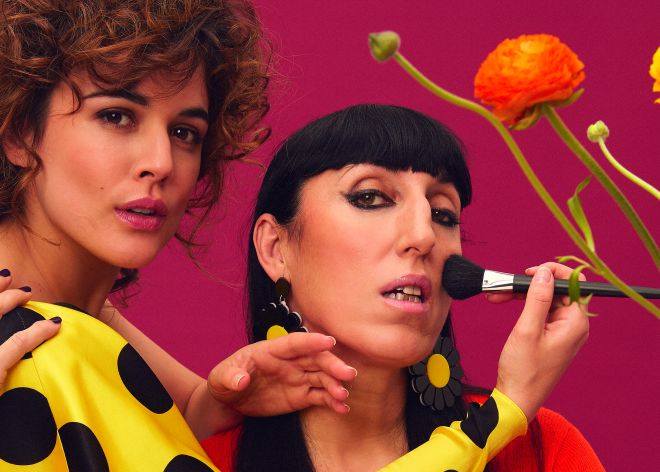 It seems bizarre to say that Julieta is Pedro Almodóvar’s first adaptation. The Spanish director has often woven in elements from other works (Cocteau’s The Human Voice in Law of Desire and Women on the Verge of a Nervous Breakdown, Cassavetes’ Opening Night in All About My Mother), but these have often felt like explicit quotes rather than straight-up adaptation.

After a brief detour in the raunchy, rollicking comedies that exemplified his early career with 2012’s I’m So Excited, Almodóvar returns to his brand of bright, colourful melodrama with this latest film, adapted from a handful of short stories from Alice Munro’s book Runaway.

Julieta (Emma Suarez in the present day, Adriana Ugarte in the extended flashback that constitutes the majority of the film) lives in Madrid with her boyfriend. She’s preparing for a move when she runs into her estranged daughter’s friend, learning for the first time of her whereabouts. The film then takes us back 30 years to the 1980s, where the young Julieta has a chance encounter with a hunky fisherman named Xoan (Daniel Grao). Smitten, she decides surprise him at his home, where his housekeeper (Rossy de Palma) suggests in no uncertain terms that this is a bad idea. That nevertheless sets the tone for their relationship, with the perhaps philandering Xoan away for long stretches of time and Julieta left to raise their daughter.

It’s difficult to properly summarize the film without getting into spoilers (or even to properly contextualize what constitutes a spoiler, in some cases!). Almodóvar unwraps the plot like layers of an onion, moving back and forth between flashbacks and the present-day in a way that preserves a certain sense of mystery and foreboding. Part of that certainly comes from the tricky adaptation of three epistolary short stories into one coherent film structure.

Julieta is also a little unusual in Almodóvar’s oeuvre in that it spans such a long period of time that the lead is split between two actresses playing the same character. “When Emma and I found out that we were playing the same character, we called each other,” says Ugarte. “Emma and I had already met six years ago, so we were like ‘Ahhhh! The new film of Pedro Almodóvar!’ We were incredibly happy that we’d see each other on set and talk — no. (laughs) 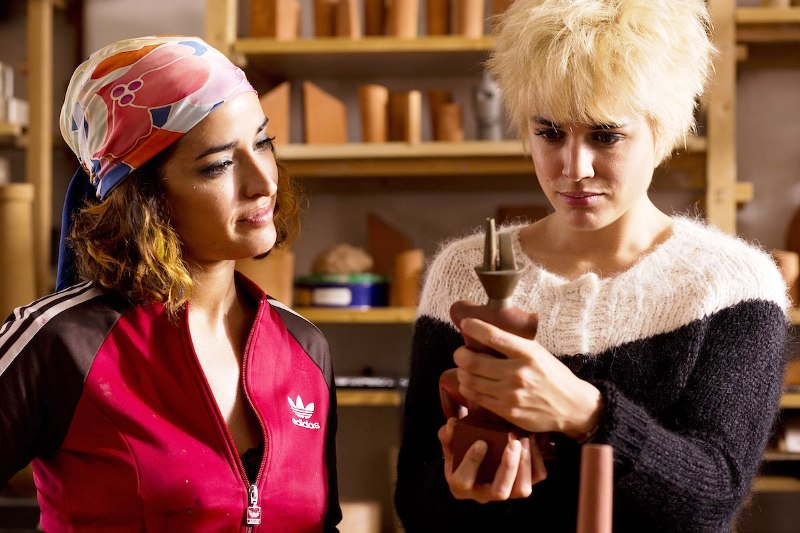 “When Pedro brought us together, I realized it was all going to be very different. Pedro is a real director, and he’s going to make all the decisions, and we’d have to be very, very open. Pedro directed us separately, so I didn’t know references Pedro gave to Emma and she didn’t know which one Pedro gave to me. (…) I did the first six weeks and Emma did the other six weeks. She didn’t see my jobs, my scenes, nothing! It’s very complicated, but Pedro had the intuition, the eye — a very, very good eye! He did it like a magician.”

Almodóvar’s visual signature is extremely recognizable: the bright colours and sometimes outsized emotions are very much his, to the point where it’s hard to imagine landing on one of his films while flipping channels and not immediately recognizing what it is, even if it’s one of his wild and raunchy early films. I ask Ugarte how the atmosphere is on an Almodóvar set that results in a more restrained film.

“The atmosphere was great,” says Ugarte. “I think Pedro can’t be separated from his sense of humour, because it’s absolutely connected to his intelligence. Even in the most terrible moments, you know, Pedro will say something absolutely and terribly funny. He combines, you know? Maybe you’re playing a very tragic character, but you’re not lonely — you have very luminous moments. The atmosphere was very funny. Even when we worked together with Rossy, Pedro would make jokes — you know, maybe crazy words to say in order to surprise us and we’d start laughing like crazy children. It was incredible. (…) The most interesting thing is that, in Julieta, I’m So Excited! or The Skin I Live In, you can perceive his sensibility. He never loses it, even if he’s more restrained or crazy and colourful, he’s always there.”

“In this film, he’s holding back a lot more,” says De Palma. “But I remember in Kika, everything was shiny in there! The set, the furniture, my clothes – everything was like ‘Hello!’ (laughs) It’s an example of how optimistic Pedro is — he’s a very optimistic person. I love that the characters Pedro writes and brings to life are always survivors. They went through very bad stuff, but they’re always, ‘Okay, we had a rough break, but we’ll take the pieces and put them back together!’ There’s no place for depression, you know? Life is bright! Even if there is darkness, it’s up to you to put this colour in your life.”

I ask de Palma whether Almodóvar’s approach has changed since she first started working with him (in 1986). “Not that much,” she says. “For me, I have to say not that much. The essence of the way he works is the same. There’s something serious and very precise and very demanding. He knows very well what he wants, but you can still share some things about your character and he decides if he buys or sells (laughs). Serious, but funny also, but in the essence it didn’t change so much. When he’s shooting, though, it’s his moment. He’s really inside the work — quintessentially in the moment. (…) His nature is… he was born for that. He’s the noodle on the soup! (laughs)” ■