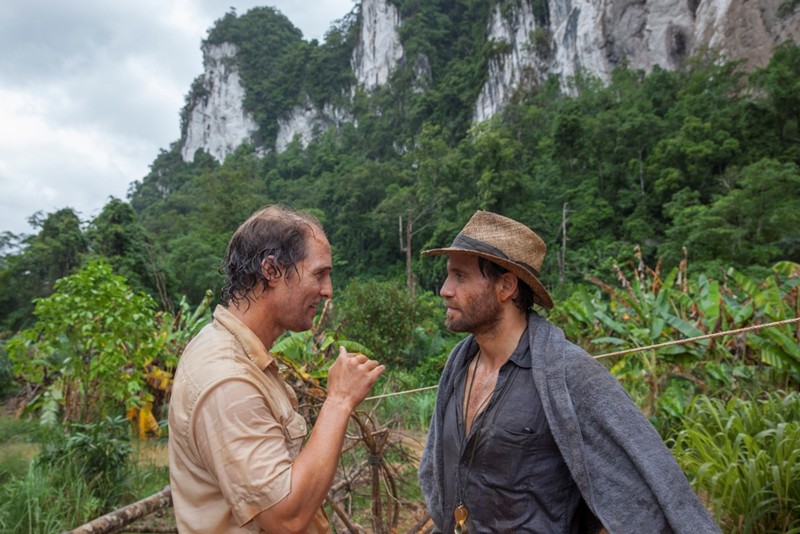 Of all the useless information I’ve carried with me since my youth, I would say about one per cent of it is ever of any use to me as an adult. (A lot of it is Scrooge McDuck related.)

I have a very distinct memory of my dad and his friend (who worked in finance in some capacity) discussing the whole Bre-X mining scam kerfuffle in the mid-’90s, with his friend insisting that “it would be a great movie someday.” Even though this happened nearly 25 years ago, I still remember thinking that it would make for a great movie solely because someone else told me this. One thing I’ve noticed in the few times where I was able to trace someone telling me “this would make for a great movie” directly to a finished film was that those movies were rarely, if ever, as good and as rich as the stories they inspired.

Two decades after I was implanted with this idea that I needed to see this movie, the story of Bre-X makes it to the screen courtesy of Stephen Gaghan and a prosthesis-laden, award-chasing Matthew McConaughey. And, to the surprise of no one, it comes up somewhat short of the expectations laid upon it.

Kenny Wells (Matthew McConaughey, sporting a pot-belly, receding hairline and janky front tooth) is a gold prospector who has fallen on hard times since taking over his father’s company. Now forced to work out of the seedy dive where his girlfriend (Bryce Dallas Howard) works part-time, Wells is incapable of convincing investors to back any of his projects until the answer quite literally comes to him in a dream: Indonesia.

He manages to convince fellow hotshot-fallen-on-hard-times Miguel Acosta (Edgar Ramirez) to take a chance on his crazy dream, and sure enough, there it is: gold. So much gold, in fact, that Wells is poised to become a superpower on the gold landscape, which obviously threatens his relationships when the money men (Corey Stoll, Stacy Keach, Bill Camp, Bruce Greenwood) come knocking.

I wouldn’t say that previous knowledge is necessary to understand any movie that’s doing its job right. In that sense, though, it’s the film’s responsibility to make you at least care a little bit about what’s at play here. Gold’s first hour or so is spent exploring the world of prospecting in increasingly vague terms. I hesitate to say that a crash-course in hand-holding, The Big Short-style, is really what this movie needs, but Gold remains extremely vague on the entire nature of the prospecting business. It makes the film’s set-up (which pre-production notes compared to The Treasure of the Sierra Madre — which it is not) feel cursory.

The film picks up considerable steam once Wells’s hunch is confirmed, becoming a propulsive though exceedingly familiar rags-to-riches glory montage that Gaghan scores to less-obvious ’80s classics (Joy Division, Pixies, Talking Heads) and peppers with loads of talented actors given little to do but sit around boardrooms looking concerned.

Gold isn’t explicitly the story of Bre-X; it borrows the broad strokes of its narrative from there but invents the character of Kenny Wells from the ground up. Weirdly, it’s the broad strokes that are more interesting than the details here, especially the notion that all of these people can jump onto a speeding capitalism train having no idea of the potential implications nor having any sort of certainty of… well, anything.

It’s an interesting contrast with The Founder, last week’s less moralizing but more inscrutable tale of capitalist greed run amok: where Ray Kroc benefitted from keeping as tight a lid on things and only letting others in if they guaranteed a profit, Weeks is embroiled in complicated dealings where everyone needs to profit for there to be any profit at all. Getting into the turmoil that Bre-X eventually found itself in might be moving into spoiler territory, but suffice to say that the way the thing all comes crashing down is considerably more interesting than the way it came to be.

Gaghan and his writers therefore put the onus on the character of Weeks to carry the film. Despite the obvious efforts to dress down its A-list star and bring the character into the real world, Weeks has a very familiar twinkle-eyed hubris on display. On one hand, it’s nice to see McConaughey channel his complete and utter McConaugheyness through a character that doesn’t benefit from the physical charms that come with a career often spent shirtless; on the other, it verges dangerously close to American Hustle-esque prosthetic parody land (Christian Bale was originally attached to the project, which proves extremely unsurprising when you first lay eyes on Weeks). It doesn’t help that Wells is defined by his two closest relationships: one with the prototypical long-suffering wife who’s out of the picture for long swaths of the film, and the other with a best friend and confidant who needs to be a bit of a blank-eyed cipher for other narrative purposes.

Gold isn’t a bad movie, but it does suffer from a lot of the same things that other movies made from things your dad’s friend talked about as being movie-worthy do: namely, it’s incredibly familiar in its beats (that’s how you recognize the inherent movieness of it — and how it imprints into the mind of an eight-year-old for, apparently, eternity) and it attempts to tell the story of a giant corporate clusterfuck through a character, then skimps on character development in favour of montages and empty propulsion traced off the drug-dealer biopic model. As several middling recent efforts (most recently Live by Night) have proven, these kinds of films seem irresistible to the people making them; it’s certainly difficult to imagine having to stifle your inner Scorsese or Ridley Scott unless you absolutely have to. Gold is competently made, but the extra oomph is nowhere to be found. ■