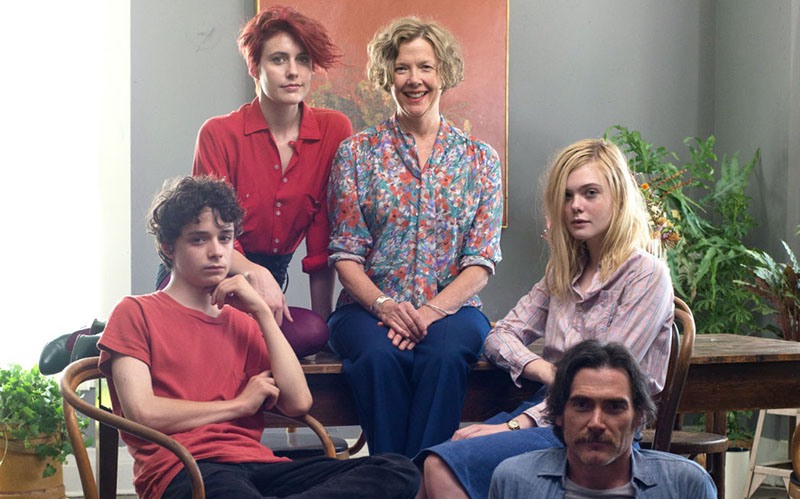 As powerful a storytelling tool as nostalgia can be, it’s also heavily used as a navel-gazing device for filmmakers who tend to rely on overly rose-coloured versions of their own lives to tell a story. Even the greatest biographical (or biographically inspired) period pieces are prone to a certain kind of pie-eyed yearning for days gone by — no one remembers their life exactly as it was, and perspectives shift over time to ensure that you’re almost always giving someone or something the short shrift.

Mike Mills’ remarkable 20th Century Women has a central character based on his own mother and sees a young man come of age in the late ’70s (much as Mills himself did), but what’s truly impressive about the film is that it doesn’t cling to those broad period signifiers for meaning. Despite its title, its setting and its Talking Heads-heavy soundtrack, 20th Century Women isn’t about how much Mills misses the ’70s.

Jamie (Lucas Jade Zumann) is the only child of Dorothea (Annette Bening), a middle-aged woman bringing up her son in Santa Barbara. Dorothea feels ill-equipped to raise Jamie in a rapidly-changing world that she doesn’t necessarily fully understand, so she relies on her punk-loving photographer tenant Abbie (Greta Gerwig), Jamie’s confused and promiscuous best friend Julie (Elle Fanning) and their live-in handyman/tenant William (Billy Crudup) to pick up the slack and fill in the blanks that she (having been born in 1925) is having trouble contextualizing herself. Jamie, having always existed in a world surrounded by women, is finding it increasingly confusing to navigate the waters of masculinity as he begins to figure out who he is and what he wants from the world.

Any summary of 20th Century Women will make it seem more schematic than it actually is. It’s difficult to explain what the film is about without making it sound like each act teaches Jamie a valuable lesson from one of the top-billed actresses in the cast. Nothing could be further from the truth. It’s an organic slice-of-life film in which nothing cataclysmic happens (the film’s most overtly dramatic moment comes when Jamie and a friend test out the fainting game, or perhaps when said friend beats him up for liking Talking Heads) and yet so much goes on. Mills uses a smattering of techniques — from voiceovers from varying perspectives to sped-up footage techniques borrowed from Godfrey Reggio (who gets an on-screen shoutout) — to create a novelistic, kaleidoscopic vision of life as he remembers it, but not necessarily as it was.

Mills’ last film was also based on his own life. Beginners told the story of how Mills’ own father came out as gay in his 70s, only a few years before his death from cancer. 20th Century Women feels similarly personal, if not as specific. It’s the kind of film that celebrates the frequent banality of life and the idea that experiences that are damn near universal (like adolescence) are also impossible to perceive as universal when you’re living them. Dorothea is torn between her ideas of what her youth was and what Jamie’s should be; conversely, she seeks help and guidance from younger women who have no clearer idea of who they are or who they could be.

20th Century Women does suffer from the type of preciousness that tends to infiltrate films that are this personal. Mills works overtime filling the film’s margins with details and references that he holds dear, which appears doubly inorganic in a film this organic. It’s particularly egregious with the music, which leans heavily on the punk and early new wave favoured by Gerwig’s character. I’m not one to particularly harp on music choices or even music discussion in a film, but a scene where the characters awkwardly sit around and talk about how the Raincoats’ lack of musical talent is what makes the music interesting strikes me more as Mills briefly stepping out from behind the shadows of his role to talk about something he likes. (Don’t get me wrong, I would be extremely down to talk about the Raincoats with Mike Mills. Email me, Mike Mills.)

I’m beginning to find myself (or perhaps I’ve always been, and am only realizing it now in the face of a very strong annual crop) enamored with films that are about life in its messy, boring, inconclusive glory. Some could argue that parts of 20th Century Women feel too precious or too fastidiously set up to ring true; I happen to think it might actually be the opposite. This film has very little to do with my own life, and yet I found a lot to relate within it, even in the way it sometimes stretches beyond all expectations to make sure it holds together as a (admittedly feeble) narrative. 20th Century Women is a beautiful movie, even if it’s about, essentially, nothing. It may as well be about everything. ■