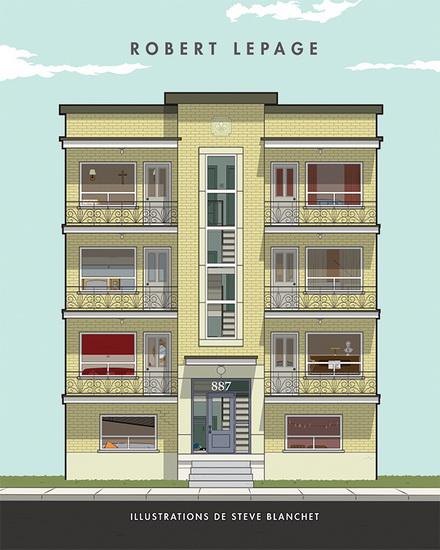 Premiered earlier this year, Robert Lepage’s play 887 was basically Quebec’s Hamilton, in so much that its initial run sold out in a blink of an eye and simply getting a ticket was considered a mark of pride, or at least serious Quebec cultural clout.

But this is pretty far from a historical musical. Lepage delved into his own past in 887, specifically his upbringing in a tiny apartment on Murray Street in Quebec City. Because memories tend to shift over time, Lepage infused his past with stunning visuals — based on video I’ve seen, because of course I was unable to snag tickets to witness it in the flesh.

For the rest of us, 887 now exists in book form, retelling the story along with descriptions of visual cues from the live performance, as well as illustrations by Steve Blanchet. It’s a beautiful package with a striking cover, and makes for an ideal coffee table book gift for the theatre or Quebec culture buff in your life.

With his current state of mind addled by smartphone addiction, Lepage looks back on his youth in this apartment with a certain amount of sepia toned innocence. But there’s a degree of sadness, too, from his reflections of his late father and when his ailing grandmother comes to live with them. Lepage’s Quebec is on the precipice of the Quiet Revolution and there’s a great amount of hope permeating throughout the apartment complex he so indelibly and eloquently recalls, even if it feels a little claustrophobic at times. It’s no coincidence that his nostalgia trip comes as his current day self is in the midst of memorizing Michèle Lalonde’s famed poem “Speak White” for an upcoming event.

In the play, the apartment complex was rebuilt in diorama form, about the height of Lepage himself. It could then be opened to reveal what was going on in each individual home. The book offers a similar trick, with a clear plastic cover that shows the outside façade of the apartment, but could be exposed to show what’s inside. In a minimal comic book style, pictures accompany the text, hinting at what was shown on stage, but mostly content with telling its own story. Blanchet’s art style purposefully limits detail in some places and emphasizes it in others — similar to Lepage’s own mix of clear and vague recollections. The colour scheme isn’t particularly vibrant, either, but without feeling too much like an old series of photos.

While a book might not compare to the wonder of experiencing it live, Lepage and Blanchet have succeeded in making the 887 book a standalone piece of work. Even Lepage’s presumably unchanged script holds up in this format, largely because the subject matter — the mystery of memories — will always be evocative. ■