People no longer go to the movies simply for a movie star. A franchise will get asses in seats, but even Tom Hanks is now having trouble getting people to see some of his films.

I figure part of this change is in the breaking down of the barrier that existed between movie stars and audiences. While I’m certain that most movie stars’ social media presence is highly curated, the fact that you can tap your phone and see what most A-listers ate and where they vacationed eliminates at least part of the need to gape at their glamour for two hours on the big screen. It’s also way easier to just say, “I never liked so and so,” go online and have that opinion validated, which deflects some of the mystery inherent to fame.

There are, however, still some untouchables: Celebrities beloved by almost everyone whose mere presence ensures a certain interest and lack of saturation. I’ve not heard too many people say negative things about Jennifer Lawrence or Chris Pratt, despite the fact that they do Internet-uncool things like put up a dog for adoption or scratch their butts on sacred rocks, and therefore the built-in appeal of the stars stands pretty firmly as the major reason why this ill-advised sci-fi romance boondoggle exists. People want to see these two on-screen. Hell, I want to see these two on-screen, but the luxury of a less inherently flawed project would be nice.

In the near future, mankind has finally found a way to colonize space. Expensive tickets to the new world of Homeland II are issued to millionaires and people in desirable fields, who are then put under hibernation for a 120-year interstellar voyage that will see them emerge, unaged, onto this brand new world. At least, that’s what engineer Jim Preston (Pratt) has signed up for. Instead, his hibernation pod opens 30 years into the voyage for apparently no reason, leaving him stranded alone on a luxury spaceship that no one’s set to inhabit for another 90 years.

After a beardy year of getting drunk at the bar manned by android Arthur (Michael Sheen), Jim begins to lust after a hibernating writer named Aurora Lane (Jennifer Lawrence). He reads all of her work and watches her passenger video on a loop, wrestling with the idea that he may spend the rest of his life alone on this ship until he finally cracks and rescues her. Now living on the ship as a pair, the two grow closer and closer together as the inevitability of their fate looms.

I’ll start by answering the question that I’m sure everyone reading the above summary has: Is this really a fucking multimillion dollar movie that uses fucking Stockholm Syndrome to establish a love story? Well, it is and it isn’t. On one hand, Jim is definitely tortured about his decision and the nature of said decision weighs heavily on the plot eventually; on the other hand, he definitely stalks a comatose woman for months before using that knowledge to seduce her in a situation where, well, saying no would make for a real different movie. 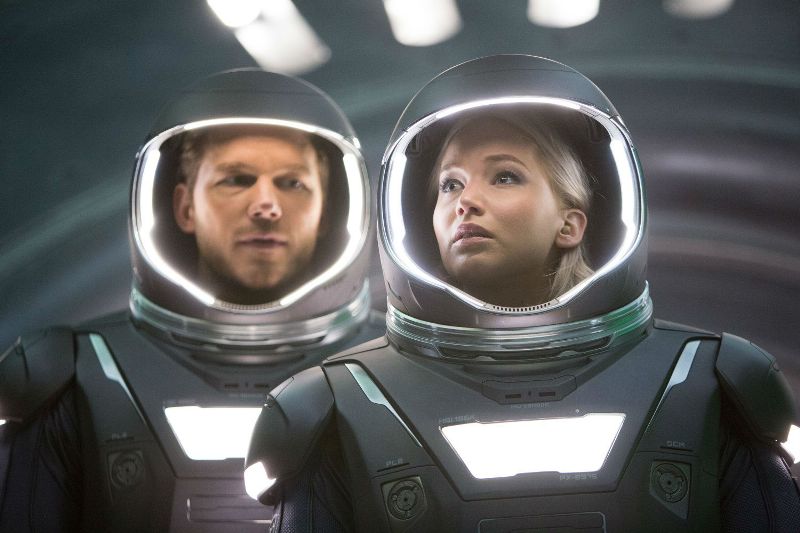 Passengers does eventually take a different path and does deal with those issues head on by its third act, but the fact remains that the film is built around an extremely creepy and off-putting conceit that director Morten Tyldum underscores with a soppy romantic second act that’s straight out of a Harlequin romance. Boning on kitchen tables, tasteful nudity (butts), lovers draped in fine silks drinking champagne — the works!

Among Passengers’ myriad problems is a complete lack of tonal equilibrium. There’s definitely a very dark and downbeat black comedy nestled in here, but it’s offset by the film’s desire to keep tabs on its complicated sci-fi constructions. Likewise, there’s an interesting play on character types that’s offset by the goofy charm of the two leads. It feels like there was a lot of production trouble making this film, from the couple of cursory hacks at supporting characters that immediately vanish to the many plot holes involving not only the direct action of the film but its broader universe. (Why is Aurora watching videos of her friends, ecstatic at a going-away party that she’s not only not at, but is also essentially a suicide party, considering she’ll never see anyone again? Why does Arthur’s intelligence and robotic matter-of-factness waver so much over the course of the film? Why does Jim’s hair grow but Aurora’s doesn’t?)

What’s essentially an Internet Nice Guy redemption story taken to its illogical conclusion, Passengers does seem fundamentally creepy and misogynistic in its form but is ultimately too silly and too poorly put together for all of its unpalatable messages to have been fully intentional. It’s a big, expensive, stupid movie starring very beautiful and very likeable famous people who are worth a fortune. I can only imagine that when the studio sent notes to nix a conversation that may explain a nebulous twist in the third act to add a completely useless scene of Pratt showering or Lawrence jogging around the facility, they only had the bottom line in mind.

All of this nonsense could potentially be explained away if the film was a nice bit of escapism, but it isn’t. It’s frequently nonsensical and maddeningly inconsistent mainstream filmmaking that utilizes several worrisome tropes to essentially deliver the most commercially viable way of getting people to watch the two biggest movie stars in the world for two hours. It’s the kind of dumb movie that only gets dumber the more you think about it, an utterly empty pean to movie stardom and movie contrivances (you’ll be glad to know that the film rips a tiny bit off of Titanic, Alien, Sunshine, Gravity, and countless other genre classic) that’s not a complete wash only because it’s easy to imagine an even more unlikeable version starring, say, Jared Leto and Anne Hathaway. ■