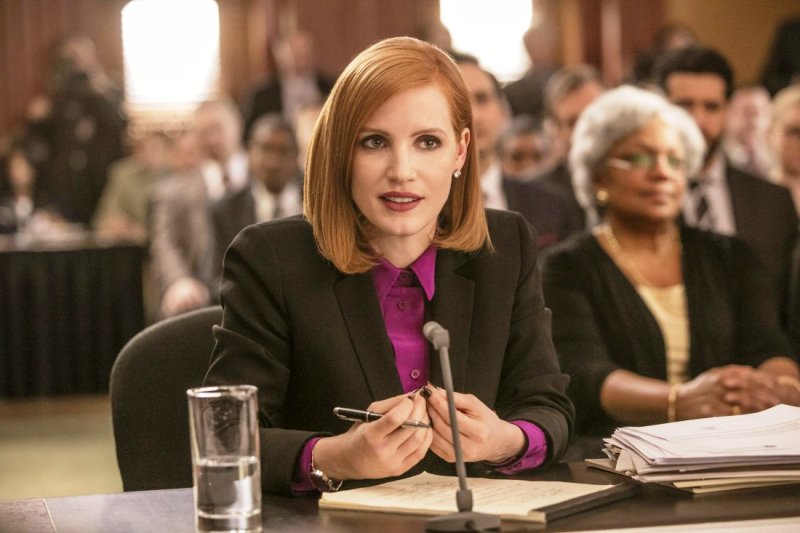 In the aftermath of Hillary Clinton’s loss, the adoption of the Nasty Woman slogan as a promotional tagline for Miss Sloane, a film about Washington lobbyists, seems almost vulgar. Not entirely unexpected, however, the slogan seems borne out of the star Jessica Chastain’s Twitter account, which has embraced the phrase as a rallying cry for women who don’t behave. A film like Miss Sloane, which echoes a matured and new-school Mr. Smith Goes to Washington, already feels somewhat dated in the quickening political climate of the new American regime.

At its best, Miss Sloane rides the wave of its fast-paced Washington-esque dialogue. Comparisons to Aaron Sorkin, the man behind The West Wing and The Newsroom, have not been out of place in describing the rambling texture of the film’s discussions. It also suffers from the same pitfalls as much of Sorkin’s work, treasuring cute phrases and sweeping emotionality over practical conversation. This isn’t necessarily a bad thing, but only serve to emphasize how seemingly out of touch the film seems.

Of course, not all of the blame can be placed on the writing; had the outcome of the election been different, the film wouldn’t play out as the outright fantasy it does now. Its optimism in favour of gun laws and women’s position within the government seems like a distant reality, which leans a little too hard on the cloying celebration of one woman improbably beating the odds.

From the director of Shakespeare in Love, Miss Sloane has that late-year polish of prestige. Made as a rallying cry rather than an incisive or challenging political work, its intent is to flatter the long-held beliefs of the pro-gun-control electorate. There is a bit of a blunt force trauma to its well-meaningness that comes across as airy rather than biting, as the movie often feels painfully catered towards audiences who want to feel comfortable in their long-held beliefs.

Miss Sloane may actually be the kind of film that works better over time. It will never overcome its air of fantasy — the environment it presents lacks the complicated textures of the real world. Overall, the movie feels a little too clever and a little too long, but is sustained by strong performances and compelling narrative. ■