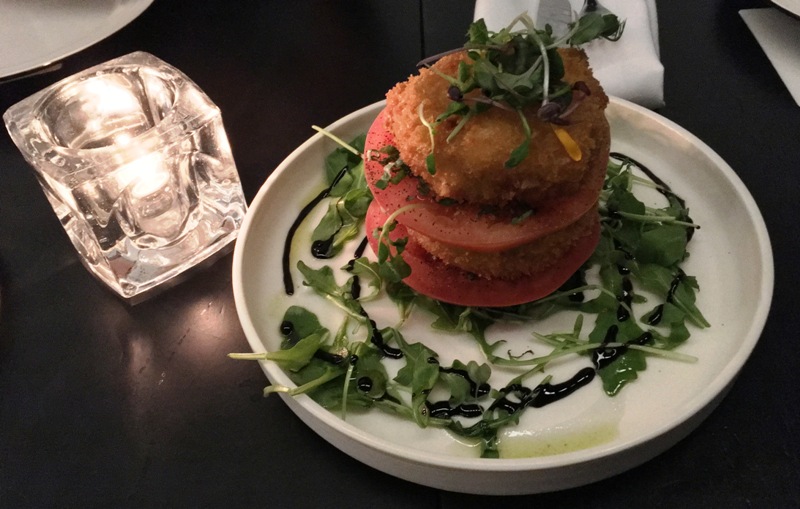 Over the last few years, Griffintown has seen a steady upward trend of going high-end casual, where upscale pomp, price and atmosphere is toned down to more relaxed rhythms. With le Bird Bar, one of the borough’s latest arrivals, it feels like a peak has been reached: The comforts of Southern soul food meet champagne lists and promises of a Playboy grotto-style bar in the basement. Spun from the minds of Montreal restauranteurs the Gauley Brothers (of the recent Foiegwa and Atwater Cocktail Club) and the spectacular self-made chef Kimberly Lallouz, le Bird Bar is one for books.

The finesse, humour and sense of fun in the Gauleys’ design is apparent as soon as you walk in, from its sleek marble bar to its arch of globular lights that say cocorico, mimicking the rising and setting of the sun, save for the flashing neon sign shaped like the sign language word for chicken. Suffice to say this is an immediate introduction to the fun-loving vibe of the place. It’s not until the cocktail menu is in your hands that it all falls into place, with punny but delicious selections like the watermelon-bourbon mix Orange You Glad I Didn’t Say Julep? and the oddly titled the Blacker the Berry (have you read the lyrics?), a murky concoction of almond, blackberry and chocolate bitters, plus the grit and colour of activated charcoal. 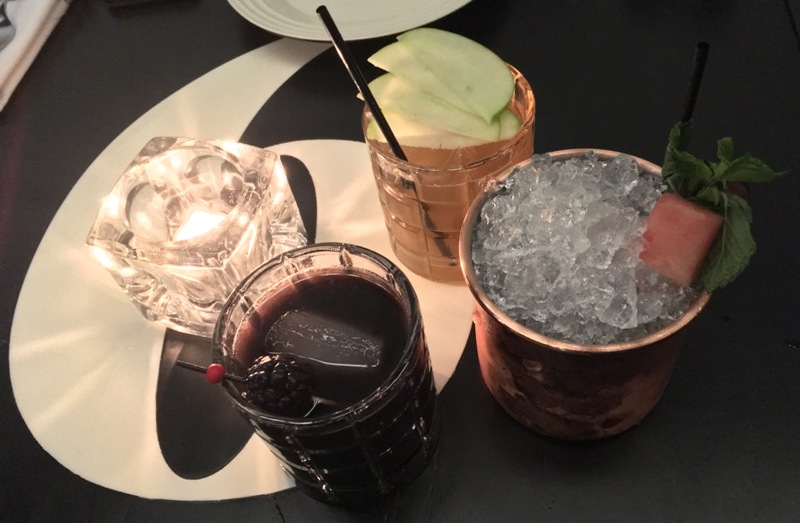 Design and vibes aside, I’d been anticipating BB’s arrival ever since it was announced at the beginning of this year, when Lallouz was oft-quoted on how she was culling together the recipes and frying techniques she’d be basing her chicken on, which I’d venture is testament to her long list of influences and relationships. Though she doesn’t hold a cooking degree, Lallouz was mentored by David Macmillan of Joe Beef and keeps culinary company with the likes of Antonio Park and Normand LaPrise. Given these connections, I admittedly had high hopes for the menu.

The charm of fine-casual eats like BB’s menu lie in how unforgiving the selections are when exposing their roots. Divided into small plates, large plates, salads and fried chicken, none of the menu’s contents stray far from what we know and love in a steakhouse, casse-croûte or soul food hole in the wall. With winter coming on, my dining companions and I opted to glut on some of the heaviest options we could find. We started with the tomato squared ($13), a hot salad pillar of tomato slices both fresh and fried in a mozza-infused panko crust, garnished with arugula and herb oil. These warm, golden and crunchy bites were a nice precursor to the end of our meal, but more on that later.

Not wanting to overdo the fried foods, we opted for their brown butter and tarragon mushrooms ($12) and bone marrow ($14), but caved when it came to the wagyu pogo ($15), a dish I took as a funny but delicious nod to la Majestique’s hot dog. Served with the ketchup and mustard of tomato jam and honey Dijon, this would have to be my first pogo that didn’t taste juicy from oil, but from the meat it’s made of. This was followed by the marrow, served in half a bone and made savoury with its blend of an onion jam’s caramel and fried spinach, the latter making an excellent complement to the velvety texture of the marrow. Last and least came the mushrooms, Portobellos and King Oysters that certainly delivered on the flavours I was expecting and made for a refreshing and tangy bite, but not much beyond that.

Then came time for the restaurant’s signature, our fried chicken ($18 for three pieces). Given the 1,001 ways people like their bird dunked in oil, my hopes for a meticulously researched dish weren’t disappointed. Lallouz’s breading is crisp, spiced and surprisingly thin, giving way to a succulent bite of brined meat on both drumsticks and wings. The menu mentions BB’s ecochef system, which reduces as much of half of the meat’s grease absorption, and I’d be inclined to believe it as I didn’t have to lick my fingers for once. It’s this bird alone that will make me come back for brunch and a side of waffles. My apologies to herbivores — I did not try their “Mockpok” vegan drumsticks, but I feel safe in assuming that they too would be worth a visit. 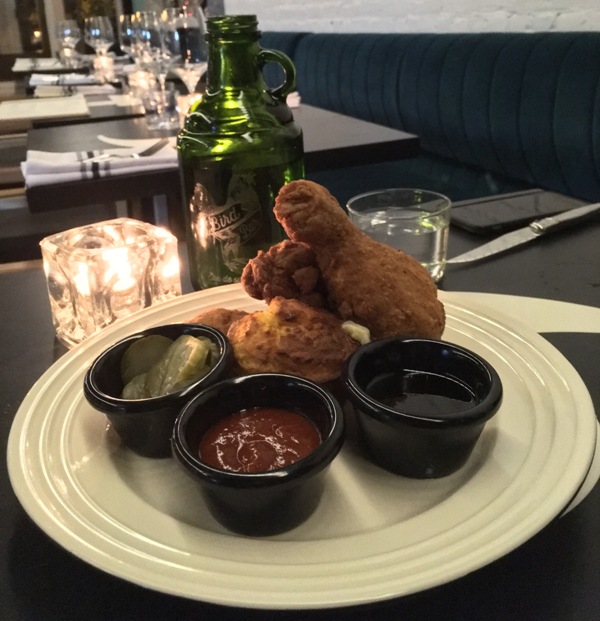 Not yet full, my friends and I rounded out the night with their large plates of shrimp & grits ($22) and the truffled mac ‘n’ cheese ($19). The former was a beautiful and buttery dish, a rich take on the Carolina Low Country’s morning repast. Served swimming au jus that was deep in beef and tomato flavours, the grits were that right balance of softness, shape and cheesy taste to complement the charcoal hints of its grilled shrimp. While all of BB’s emphasis is placed on chicken, this dish left as much of a mark. As a result, the following mac ‘n’ cheese ended up being more than enough to order. Served in a hot skillet full of shell pasta rolled in gooey cheese and white sauce with the aromas of truffles and a thick, crunchy breading on top, it was worth the last and most filling bites: Hats off.

With many eyes on where the next trend is headed in the Montreal foodscape, my bet keeps leaning toward what is most comforting, and the American South provides. Even when lightly elevated, soul food is complex in its roots, simple in its servings and endlessly delicious — all the better when there are talented minds behind it. Bird Bar’s future is looking bright, golden and crispy. ■