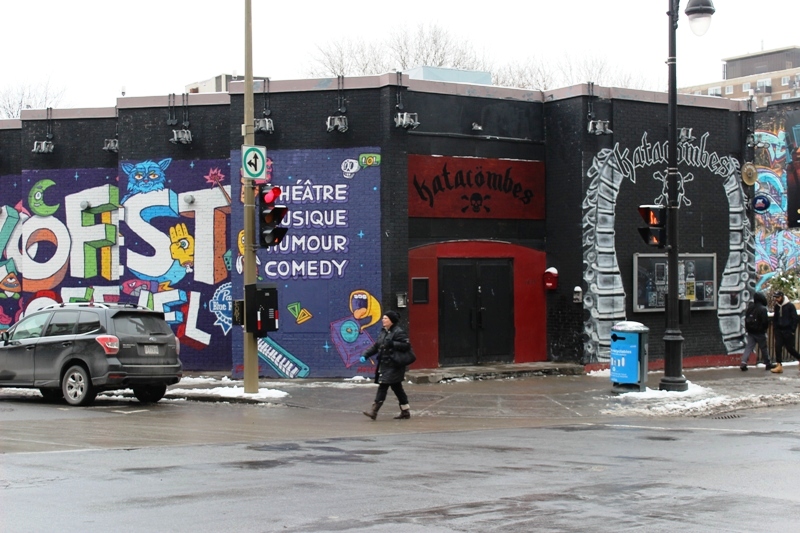 On the corner of Ontario and St-Laurent, hidden just out of sight from Place des Arts, sits a large black building. Two painted spines arch over a white skull and crossbones, marking one of Montreal’s major metal and punk institutions, the Katacombes Solidarity Cooperative.

Owned and operated by three co-owners, the venue celebrated its 10th anniversary in November. “Time really does fly,” says Janick Langlais, one of the co-owners, as she points to a white banner the venue made for the occasion. Langlais attributes a busy and difficult booking schedule for the delay, but the venue is finally set to celebrate its milestone with a show this Friday (scroll down for details).

Langlais previously co-owned l’X, an all-ages venue not far from where Katacombes now stands. From 1998 until UQAM took possession of the building in 2004, Langlais put on shows for music fans who estimates were between 12 and 35 years old.  After L’X closed, she and her partners were unable to find a venue big enough to accommodate the types of shows they had previously put on. Langlais decided to open an 18+ venue with some of her partners, while others from the group founded a smaller all-ages venue called la Shop, which closed within a few months of opening.  Taking the name they had given to the dingy basement of l’X, the new 18+ venture was named Katacombes.

Three months after securing a space, Katacombes was set to open. The stage was built, the soundboard installed, and the walls were sticky from the still-drying paint. On Nov. 3, 2006, the original incarnation of Katacombes opened its doors further down St. Laurent from its current location. The pub style venue marked its opening night with a tribute to punk icons the Ramones, and filled its 165-person capacity. After three years at the location, the building’s new owners announced plans to demolish it, thought it still stands to this day. “We were again evicted,” said Langlais, “story of my life.”

Inside the current venue, the black walls of the rounded room are covered with murals of skulls echoing the Catacombs of Paris. “Well, it is called Katacombes, we couldn’t have rainbows all over the walls,” says Langlais. A column towards the center of the room looks as if it was entirely made of skulls, but the décor is a drastic change in style from the room Langlais first laid eyes on in 2009 — the walls were bright yellow, and a plastic palm tree stood where the tower of skulls now stands.

Before Katacombes, the building was home to a “problematic” nightclub.  “We found bullet holes in the plumbing, their alcohol licence had been suspended,” Langlais explains, “so we had to take on this revitalization project with the neighbourhood and the city to make everything legal.” 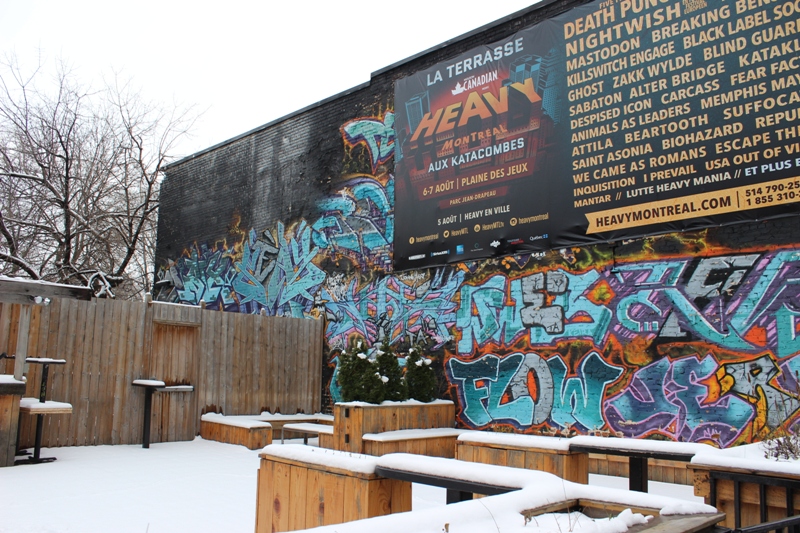 While the venue mainly caters to punk and metal shows, Katacombes provides a space for the wider community, including a number of summer festivals. “We have improv nights on Mondays — which is not something people would assume we do — and every Wednesday we also give swing dancing lessons. It might seem like it would clash, but we are a multifunctional room.”

With multiple celebrations for their 10th anniversary planned into the New Year, Langlais admits that she didn’t think that Katacombes would be around this long. “You tell yourself ‘I hope this lasts as long as possible,’ but in the heat of the action, it’s really been day by day, week to week.”

Even after a decade, Langlais is uncertain of what the future holds. As the area has become home to an increasing number of condos, Langlais feels that the face of the community has changed. “For now it’s good. We don’t necessarily know how long we will stay at this location, though.”

What is certain is that Katacombes has given a DIY home to Montreal’s metal and punk scene, and shows no sign of slowing down. ■

Katacombes marks its 10th anniversary with a show featuring the Suppressors, the Lab Ratz, the Bombs and the Von Rebels on Friday, Dec. 9, 9 p.m., $7/$10