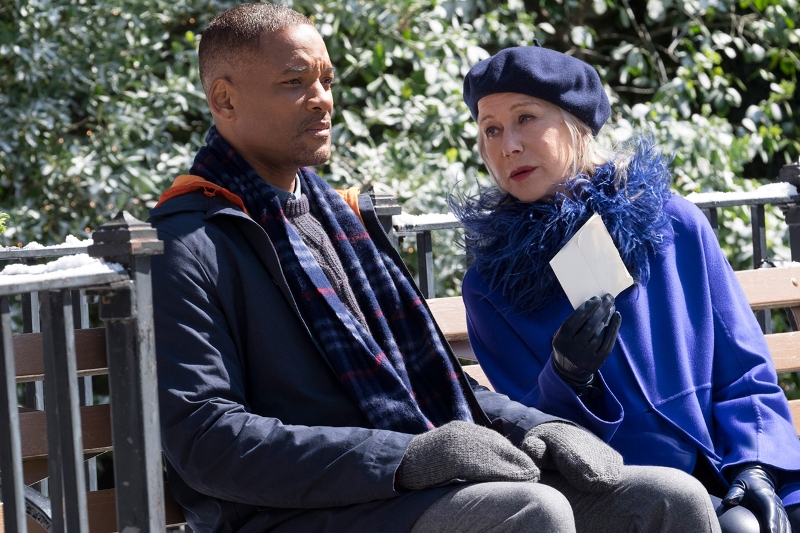 Will Smith and Helen Mirren in Collateral Beauty

I’ve never been a particularly emotional moviegoer. I can certainly get bummed out at a suitably depressing film, but I very rarely cry at movies — until this year. For whatever reason, I’ve cried more this year at the movies than almost every other year combined, which was worrisome to me until I saw Collateral Beauty. If I didn’t cry at this turgid, manipulative melodrama whose biggest (and, I suspect, only) purpose is to turn on the waterworks, the change might not be as intense as I initially thought. Collateral Beauty asks the very non-pressing question of what a movie about grief would look like if it were mostly inspired by Pinterest boards and inane image macros posted by your wealthy friends living their best life in Bali eight months out of the year.

Howard Inlet (Will Smith) was once the high-powered and much beloved star of the marketing firm he cofounded with his best friend Whit (Edward Norton). Since the tragic death of his daughter, however, Howard’s career has taken a severe downturn. Essentially non-verbal, he spends his days building elaborate domino structures that he then destroys, his only real conversations happening tentatively with Madeleine (Naomie Harris), a woman he meets at a grief support group. Howard’s catatonia has almost sunk the business, so Whit and his other two partners (Kate Winslet and Michael Peña) devise a plan to get Howard to be recognized as unfit to make business decisions in order to sell the company. That cockamamie plan involves hiring three actors (Helen Mirren, Keira Knightley and Jacob Latimore) to pose as hallucinations of Time, Love and Death in order to counter self-help letters written by Howard that a private investigator (Ann Dowd) has illegally fished out of a mailbox.

Smith certainly seems to have a lot of love in his heart for this type of mushy, explicitly tear-jerky project. It shares the same kind of manipulative fervour and love of mucusy catharsis as Seven Pounds, but it takes an even more circuitous route to get there. First off, it asks us to accept three so-called “good people” gaslighting their supposed friend into a mental illness as something noble and good; secondly, it gives all three of those so-called good people their own personal turmoil of extremely varying intensities (Norton’s pre-teen daughter hates him for destroying his marriage; Winslet’s focus on career has all but eliminated her chances of having children; Peña’s literally dying of multiple myeloma) to work through for extra pathos.

Allan Loeb’s disastrous screenplay is also structured in such a way that it deliberately obscures details for maximum payoff — essentially, this is an M. Night Shyamalan-type thriller where the surprises are only more sadness. All this is best exemplified by the scene where Howard finally decides to sit in on the grief group after weeks of skulking outside, too afraid to come in. Instead of beginning the scene with Howard’s entrance, the film instead takes the time for a heart-wrenching monologue by one of the group members explaining the death of her child. It’s a sad scene, sure, but it’s mostly completely useless — the character is never seen again, and Howard basically interrupts the scene, ensuring that we move on to something else immediately. The scene is only there because Loeb and director David Frankel spotted some fertile ground in which they could jam some more tears and misery.

I felt a little bad about the cynicism I felt watching Collateral Beauty. After all, it deals with very real and very raw human experience, even if it does so in a ham-fisted and treacly way, and the talented cast certainly seems to believe in this material. It brings me no particular joy to scoff at the idea of dead children simply because said idea is brought up, and I toyed with the idea of giving the film some sort of inner Hail Mary pass based on how monstrous it made me feel to find this movie so completely deadening halfway through, but Collateral Beauty only doubles down on its brazen sentimentality as it goes along until it reaches a final twist so preposterously obvious and manipulative that the film’s only further possible move to wring more tears out of the audience would be to fling literal chopped onions at them. If you want the catharsis associated with sitting through fictional misery, go see Moonlight, go see Manchester by the Sea, go see Loving, go see Arrival — there’s no lack of quality catharsis to be found in theatres this week. Don’t bother with Collateral Beauty — wait until your life coach recommends it, because they almost certainly will. ■