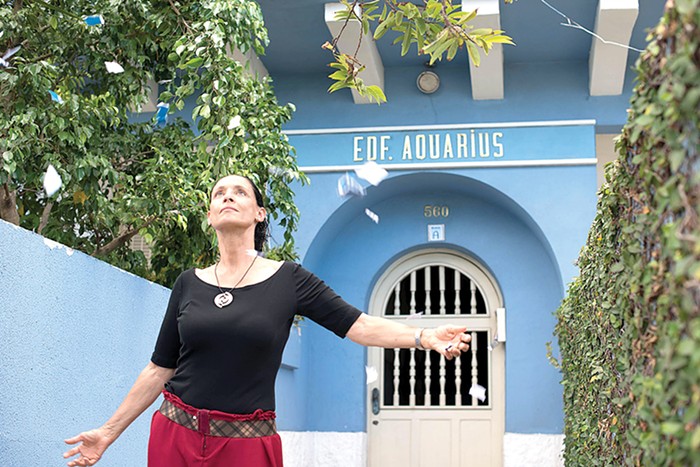 I’ve written before about the idea of the real-estate thriller, a relatively short-lived product of the ’80s that focused not on protagonists in danger, but on their expensive homes and the idea that they may be ruined. (The protagonists are sometimes also in danger, but it’s often secondary to the destruction of the valuable investment.) It’s not that surprising that these have fallen out of favour as the world slowly but surely approaches total collapse — it’s hard to feel bad that a banker’s Italian marble countertop was shattered when recession is on everyone’s mind. The real-estate thriller seems to have been replaced by an earthier cousin: the gentrification thriller. Granted, not many of these films are “thrillers” in the purest sense; I’d say that Ira Sachs’ last two films (Love Is Strange, Keep the Lights On) were certainly using concerns about gentrification and displacement to propel the plot, without necessarily getting all Basic Instinct about it.

Kleber Mendonça Filho’s Aquarius is similarly concerned with these ideas and, although it would be a stretch to call any of it a thriller, it’s certainly permeated with the feeling that things might get rapidly and exponentially worse at any time. Sonia Braga plays Clara, a retired writer and journalist who still lives in the Art Deco apartment by the beach where she raised her family. Widowed and with all of her children grown and out of the house, Clara lives a fairly relaxed life but sees all of the other tenants in her building vacate. A developer has bought out every apartment except hers with the goal of tearing the building down and building a new one on the prime location, but Clara has no intention of moving out. She butts heads with the head architect (Humberto Carrao) as well as with the former tenants, who she learns (much too late) will not receive their buyouts until she herself moves out. As tensions flare, the construction company begins ratcheting up the intensity of their “negotiations.”

A streamlined summary like the one above makes Aquarius sound like the thriller it isn’t; in fact, it’s a rather messy and multi-tentacled fresco more concerned with texture than structure. Like its festival-mate Manchester by the Sea, it favours scenes that say something about the characters rather than add a relevant cog to the plot, even if it means starting the film with a largely useless prologue set in 1980. Suffice to say that Aquarius would anger and confuse hardline screenwriting purists dead set on a streamlined storytelling structure; it ambles and pauses for a breath consistent in its nearly two-and-a-half-hour runtime.

Filho’s approach to the material is novelistic, hiding larger elements in a gesture or in the background of a shot. He’s also very much concerned with the role of music in its protagonist’s life, sometimes stopping the action entirely so Clara can explore her record collection (there’s very little non-diegetic music in the film, meaning it’s scored almost entirely through Clara’s song selections). Any idea that Aquarius is a dull or hermetic film, however, goes right out the window — it’s a film that’s tremendously alive in spite of it all.

For all of those qualities, however, Aquarius still has a narrative to serve. No matter how many pauses it takes, it still needs to work through a beginning, middle and end. That’s, perhaps, where things get a little dicey. As I’ve mentioned, the film is permeated with this sense of dread that’s compounded by the fact that Filho seems in no great hurry to resolve anything – but it keeps chugging along whether you notice it or not, which eventually leads to an ending that feels rushed and disposed. It’s not, of course — nothing about a 142-minute movies that takes the time to play through the entirety of “Fat-Bottomed Girls” can truly be rushed — but the ending feels more like an inevitable necessity than a satisfying conclusion.

Aquarius has been fairly controversial in its native Brazil; it wasn’t submitted as the country’s representative for the Best Foreign Film Oscar, which was met with cries of governmental suppression. It was given an 18 certificate for its scenes of ‘graphic sexuality’ (which aren’t that graphic but do contain an above-average number of dongs), which was seen as a deliberate attempt to limit viewership. All of this owes to the film’s less-than-sterling depiction of Brazilian bureaucracy, which could translate as a direct metaphor for the way the country is currently being run. All of this might be surprising to someone, like me, who’s not super familiar with the current state of affairs in Brazil. Aquarius doesn’t feel like a deliberate act of provocation – and maybe that’s the trick. Either way, it’s well worth seeing. ■