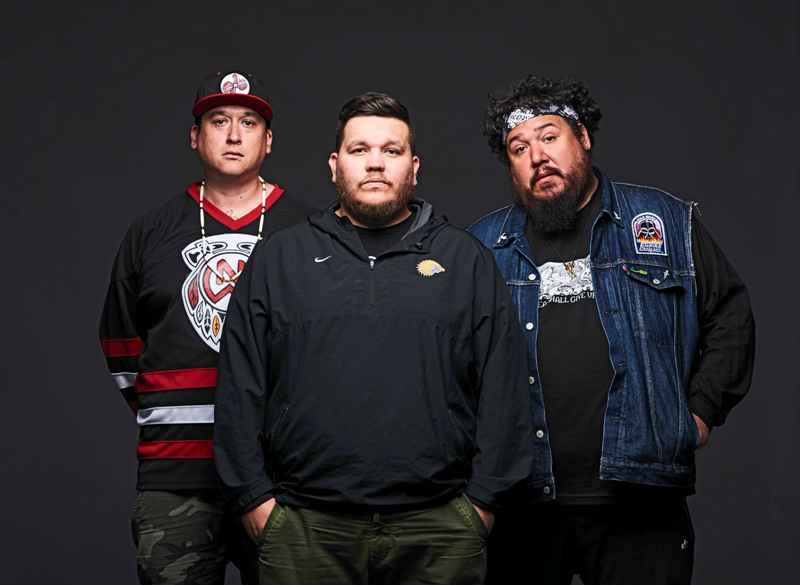 Since bursting onto the Ottawa party scene with their “Electric Pow Wow” sound, A Tribe Called Red have toured the world honing their craft and sharing their stories. Their new album We Are the Halluci Nation carries an impressive feature list — including Canadian throat singer Tanya Tagaq and the legendary rapper Yasiin Bey — showcasing a much more structured approach to songwriting. The group also speaks about the history of residential schools in Canada through a spoken-word narrative that’s woven in and out of the track-list.

In anticipation of their up-coming Montreal date, I sat down with Ian Campeau (aka DJ NDN) to discuss some of their new musical choices and political messages.

“That started two years ago, on tour. We knew we wanted an album and we knew we wanted it to be collaborative so that’s kind of as far as that went. As we were touring Europe, we started meeting people, collecting samples and working on music in airports, hotel rooms. Then we went to Australia and collected more samples and eventually made it back to Ottawa, threw it together and polished it up. A lot of collecting.”

“Yeah, electronic music — especially in the era that we were putting out a lot of our music — was really formulaic. You know, intro, build-up, drop, repeat. Working with vocalists and having full structures with verses and choruses was new to us at least.”

“Tanya was the easiest [feature] I think. We sent her a beat and then she recorded over it and we took those vocals and built a new beat over that.  It was brought to our attention a few times how it also kind of worked in the way throat singing works: one person does something and passes it to someone else, but they have to change it a bit and the first one that messes up loses — that’s kind of the game. You pass an idea then change it then pass it back. It was kind of neat how that worked out.”

“We got two dancers travelling with us that are fantastic. I love our set right now; it sounds really good. I think it’s because of the music we’re using  it’s a lot more of our new music.”

“[We’re] getting some truth out there. I think Canada, through its idea of reconciliation and pride, needs to confront a lot of things. There’s some sort of outlet for artists to be able to start telling their stories and telling their side of history and how we got here.”

“Growing up in a colonized country as an indigenous person, you feel very alone. We don’t make the rules, the rules are made on us. So travelling to other places and meeting Sami people, Mayans down in Mexico, the Indigenous in Australia, you realize that colonization has a check-list. We’re all going through the same stuff and have the same history. The Sami people and the Australian people both have their version of residential schools and right now are protesting against pipelines that cut through their territories. It’s exactly the same, so when you see this, the struggle gets less lonely, so you’re able to sit and talk with these people about your history.”

“We turn and look at old racist laws in the U.S., we say that slavery laws are horrible, and they were, but we still live under race-based laws in Canada. I still carry an Indian Status card that proves my race. It’s time to start looking at that. Canadians need to understand that that pride they have stems from a giant pillar of white supremacy. I’m not saying don’t love your country, I’m saying we need to know this history. This is what needs to be known before we start being blindly nationalistic. These conversations are staring to happen and here you are as media asking me questions like this and I’m able to say it. It’s exciting.”

How to make change

“The hierarchy of race was man-made, which means it can be un-made. Same with misogyny, same with any oppressive ideas that people hold onto. Once we start addressing ideas like this is when we can start ending the oppression.” ■