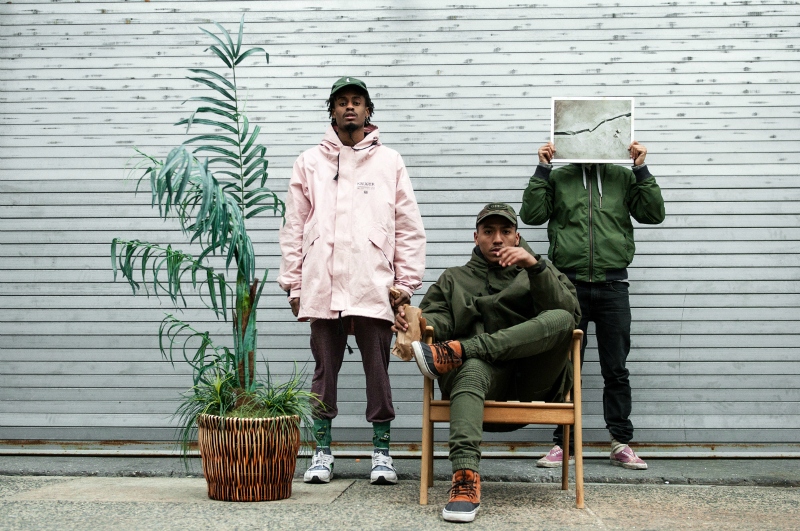 A lot has been going on with the Posterz since we spoke to them last December. In the past year, Montreal’s favourite hip hop act have embarked on international touring — most notably an appearance at Austin’s SXSW festival — opening slots for rap icons like Travis Scott and Danny Brown, a number of sold-out hometown shows, and more.

But while there were some solo releases from the boys, one thing we didn’t see a lot of in 2016 was music. That dry spell ended on Halloween, when the Posterz dropped Bored in Canada, a three-song EP that heavily samples Warp Records’ golden children, Boards of Canada.

We spoke to Husser, Kris and Joey about the EP, the year they’ve had and what is yet to come.

Mr. Wavvy: How did the concept for this EP come about?

Husser: So I get my psychedelics from a homie, big ups to him. He’s a musician alike, so we always put each other on some shit. Went to pick up from him one night, and he showed me Boards of Canada. I was like “This shit is tight!” I knew right away something had to be done with their stuff. Drowned in some of their music, did some freestyles, brought the idea to the rest of the Posterz that we should drop a quick li’l somethin’ sampling these guys ‘cause everyone was fuckin’ with the vibe. And so we did.

MW: If you had one word to describe Bored in Canada, what would it be?

MW: Besides the play on words with the Scottish duo, was there any more significance to the EP title? Maybe feeling tired of the country or anything along those lines?

Joey: Pretty much. It’s a bit of a comment on the limitations of the music industry in Canada.

Husser: Basically in relation to how Canada is not the place for niggas to be (laughs). ‘Specially in the winter…

Kris: It feels like we’re stuck in a box. Montreal is such a small city, it gets boring for creatives from the corner. After so many years you feel jaded. But we still vibing. Just like Genie says in Aladdin, “Phenomenal cosmic powers, itty bitty living space!”

MW: Was it something about their sound that you thought shrooms would go well with, or more of a beautiful coincidence?

Husser: Yeah, somethin’ like that. They go hand in hand.

MW: Towards the beginning of the year, you guys saw a huge milestone in your career: playing SXSW. After seeing the Instagram pics, I’ve got to ask, how was it meeting Nardwuar the God?

Kris: We could have went to SXSW a year prior. But yeah, it was cool to see all of the artists in world doing their thing. Nardwuar was cool, he said “To be continued…” He felt the vibrations, hopefully we can conclude our meeting.

Joey: Really it was cool, but fast.

MW: Any other particularly great memories from Austin?

MW: I understand you guys produced the soundtrack for Boost (which premiered at Festival du Nouveau Cinéma last month). How did such a project fall into your hands?

Kris: The director decided to put our song from Starships in his movie, and reached out for personals for the soundtrack.

MW: What were some differences you guys noticed when working on it that varied from work on your EPs?

Husser: Nothing really besides the fact that someone’s asking you to create a certain vibe as opposed to no one tellin’ us shit [with our own projects].

Joey: At the end of the day, you’re a tool for the vision of the director. The vision is the director’s, not your own.

MW: The second half of 2016 saw a lot of solo work from Husser. Between opening for Danny Brown, playing Osheaga and a slew of other festivals, the now-infamous clip of you rapping to Logic and, of course, “Like It Doesn’t Hurt.” It’s safe to say it’s been a big year for Nate. Why was it important for you guys to wind down the year as a group?

Joey: It wasn’t really the plan to wind down. Things just played out like that.

Kris: This new Posterz EP should’ve been out a minute ago but niggas is hatin’. Nah I’m joking. The Posterz are a group but solo artists as well.

MW: Husser, talk a little bit about how the now-infamous video of you rapping to Logic came to be.

Husser: I was in Artist World at Osheaga and had crossed paths with him earlier in the day and got to say “wassup.” Then I was like, “Yee, I gotta rap with this nigga like face to face. Just go verse for verse.” Later in the day, I ran into Sina from Montreality and told him I was lookin’ for Logic and whatever, and he pointed me to his lil’ trailer thing. So we pulled up, Sina knocked on the door and spit his magic and boom, Logic pops out. Apparently his wife was on the line and he couldn’t spend more time to drop a verse, but oh well. It was cool enough.

MW: What’s the current status of your upcoming solo EP, Ghetto Rock for the Youth?

MW: Why has the musical focus been based around EPs and shorter projects thus far?

Husser: Cause we work damn slow as a group and hold a fat bank of tracks — unfinished business.

Kris: We still building music as solo artists as well and group music we just give you the coolest shit we got at that moment.

Joey: Because the EPs are a bit like business cards to find new partners for the full length album. It’s both gaining fans, building the foundation, the behind the scenes crystallization.

MW: What should we expect from the Posterz in 2017? I know the debut album is finally on the way.

MW: What is the meaning of life?

Husser: The possibilities are infinite

Kris: I dunno, Google it! Knowledge is like a glass of water: you give it to ’em half full and wait. I’ll ask for more. We don’t force feed around here. ■

The Posterz play with openers Of Course, l’Amalgame and Ragers at Club Soda on Wednesday, Nov. 23, 9 p.m., get free tickets here