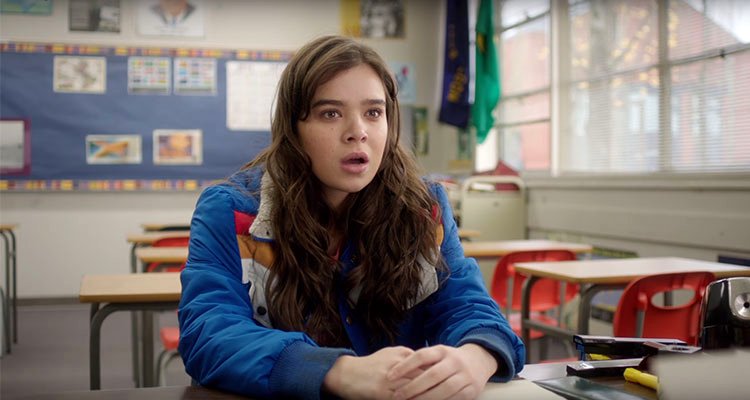 The Edge of Seventeen

High school movies didn’t particularly speak to me when I was in high school. They seemed like heightened, idealized versions of what I was actually living through at the time, played by actors that looked too old and spoke too cleverly. Now, the opposite seems true: teenagers in movies made now seem more relatable than they’ve ever been, and the teenage experience on-screen seems more realistic than it was when I was a teenager.

There are two reasons for that: the first is that nostalgia and memory have reframed my teenage experience to remove all of the boring, useless, repetitive shit and boiled my memories down to a greatest hits package, which makes the clean narrative structure of a high school film seem more in tune with my own memories. The second, much less hippy-dippy and depressing answer to that is that the people making high-school movies now are more or less my age. I can’t imagine someone who’s 16 now seeing too much of themselves in something like The Edge of Seventeen, a high-school comedy where the sullen teenagers listen to Aimee Mann and barely snap, text, Vine, tweet, sext or whatever the hell else you want to ascribe to the current generation.

Nadine (Hailee Steinfeld) has always had trouble fitting in. Constantly in the shadow of her cool, popular, gregarious and jocky older brother Darien (Blake Jenner), she spends the entirety of her time with her best friend Krista (Haley Lu Richardson). Crippled by self-doubt and low self-esteem, Nadine is more than a little adrift in the high-school world, a problem that’s exacerbated tenfold when Krista and Darien start dating. This cataclysmic shift in the social strata sends Nadine into a tailspin, venting her anger at her tough-love history prof (Woody Harrelson), ignoring the decent-but-dorky schoolmate (Hayden Szeto) who holds a torch for her in favour of the cool-but-rude Lux Interior-looking Nick (Alexander Calvert) and driving her harried mother (Kyra Sedgwick) mad.

Truthfully, the biggest problem with The Edge of Seventeen might be that its narrative is anything but singular. It must’ve been something of a tough sell to build a movie around a story that sounds more like a mid-season arc on Suburgatory or Parenthood than a standalone feature film. It toes a line between grounded and relatable and simply generic; while the film is definitely thematically about the dramatic excesses of teenagedom, it’s perhaps not quite defined enough as its own narrative to be fully compelling. (“Teenage movies used to be about something,” wheezed the old man. “They were about losing your virginity or killing the popular kids! Now you kids are all about regular teenager things!”)

What it lacks in originality, it makes up with texture. While there’s definitely a whiff of oh-so-precious, oh-so-precocious Juno-isms to her particular brand of misery, Nadine’s a fairly grounded character, and her sparring matches with Harrelson are some of the film’s best moments. (Harrelson embodies a particular type of taciturn, deadpan educator that should be familiar to most people.) Writer/director Kelly Fremon Craig excels at blurring the lines that so sharply define the high-school genre — no one’s a total dork or a total prep jock; most kids exist somewhere in the middle. This does require some of the unavoidable suspension of disbelief — there’s no way that Hailee Steinfeld would be an inconspicuous, anonymous presence (even Winona’d up in clashing outfits) in a high school, but that’s Hollywood for you.

Strangely enough, The Edge of Seventeen is rated R, and rather candid about all of its raunchy business. Sex, drugs and booze are depicted not as pyramidal events around which life is centred but inevitable facts of life — but on the other hand, phones and technology are curiously inconspicuous in the film. It certainly feels, at times, like Fremon Craig is doomed to be on the outside looking in when telling this story… but then again, the few times that actual teenagers wrote films about teenagers (I’m thinking most specifically of Catherine Hardwicke’s Thirteen, written by Nikki Reed when she herself was a teenager), it resulted in one of the pearl-clutchiest, most melodramatic portrayals in recent memory.

I guess there’s really no way around this problem. Being a teenager has always been and will always be a slightly surreal, over-dramatic and insane experience and those of us who survive to want to tell the tale tend to be of a certain disposition. At one point, an exasperated Nadine explains to Harrelson’s character that she’s an old soul, not like the others, who likes old music and old movies and old people. There’s a reason why this is a common thread in teenage protagonists — no matter the age, they should find something to like here. ■

The Edge of Seventeen opens in theatres on Friday, Nov. 18. Watch the trailer here: